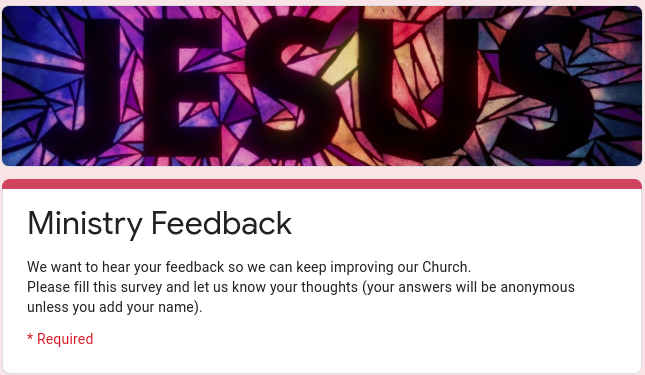 An anonymous (but official) survey has been making the rounds, apparently seeking feedback from Black Catholics.

It was shared with BCM recently (and by various other Black Catholic orgs), but we were unable to confirm the source of the document. There are, however, indications that it is from an official Church source.

The questions concern the recent happenings within the country—including the ongoing racial reckoning, BLM, racism, and COVID-19—but the specific target of the survey is also somewhat unclear.

The title and description make no reference to race or ethnicity, and people of color are mentioned in the third question, but the fifth question assumes respondents are in fact Black.

That said, there is a section thereafter that asks for the "cultural family" of the respondent, giving options and corresponding codes for virtually all ethnicities present in America. (It also mentions Eastern Catholics, though only in the context of immigrants.)

This verbiage echoes that of the ongoing young adult listening sessions held by the USCCB for minority Catholics, with the next one being led by Black Catholics themselves on February 21st.

However, a source tells BCM that the ethnicity code system is common to dioceses and other official Church arms throughout the country. Even so, without official confirmation of its source or purpose, individuals have expressed a hesitancy to respond to or share the survey freely.

But with even the slight possibility that it will in fact reach the eyes and ears of the bishops at some point in the near future, it may behoove Black Catholics nationwide to make their voice heard. A thought and a podcast: the Black Catholic Messenger show is live Review: 'Black Catholics on the Road to Sainthood' (part 1)