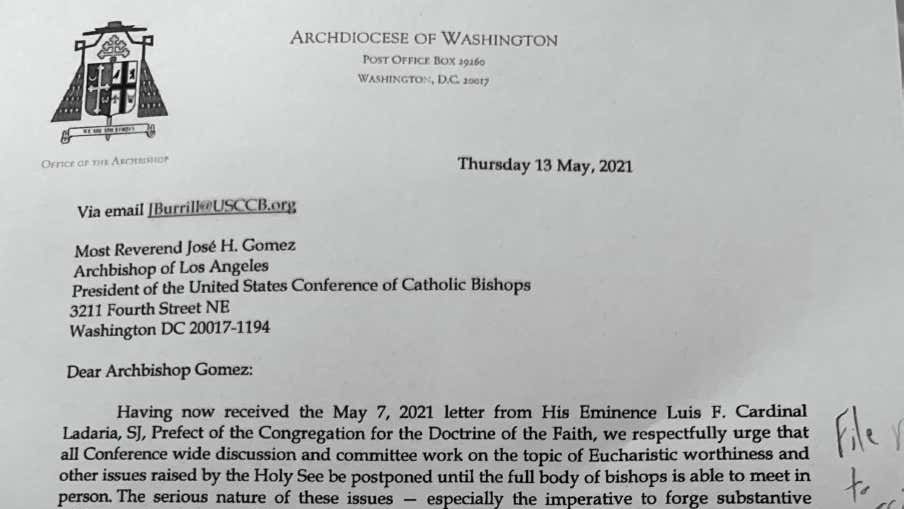 The episcopal signatories of last month’s protest letter sent to USCCB president Archbishop Jose Gomez have been revealed in a leak, and half the nation’s active Black bishops were included.

The letter, delivered on May 17th, concerned—and attempts to postpone—the plan by Gomez and other more conservative bishops to create a national policy effectively barring President Joe Biden and other dissenting Catholic politicians from Communion.

DC’s Cardinal Wilton Gregory is reported to have been one of the letter’s principal authors. His auxiliary, Bishop Roy Campbell, Jr., is also a signatory. The other reported principal author, Chicago’s Cardinal Blase Cupich, was—like Gregory—joined as a signer by all of his auxiliaries, including Bishop Joseph Perry.

Stowe, fairly outspoken in his progressivism, was joined by Bishop Anthony Taylor of Little Rock and Bishop William Medley of Owensboro as the only signatories located in the Upper South.

Bishop Joseph Kopacz of Jackson was the only signatory from the Deep South.

Out of the ~270 US bishops, roughly a quarter signed the letter: 47 ordinaries—including 11 archbishops—and 21 auxiliaries. (One surprising inclusion—who later reneged and asked to be removed—was Cardinal Timothy Dolan of New York.)

The text and its list of signatories were obtained by The Pillar, a new Catholic media outlet formed by JD Flynn and Ed Condon in January (immediately after their departure from EWTN on New Year’s Eve).

Having already intervened in Gomez’s attempt to critique Biden on the morning of his inauguration, the Vatican sent a letter via CDF Prefect Cardinal Luis Ladaria to Gomez on May 7th—10 days before the Gregory-Cupich letter—urging caution on the topic of Eucharistic worthiness.

Ladaria's instruction was apparently interpreted by some US bishops to mean no major action on the topic should occur at this month’s virtual USCCB meeting scheduled for the 16th-18th, occasioning the Gregory-Cupich letter itself.

“We respectfully urge that all Conference wide discussion and committee work on the topic… be postponed until the full body of bishops is able to meet in-person,” it reads, suggesting that no movement would be made until at least the annual USCCB meeting in November.

The letter was also fairly direct in its criticism of the Gomez crew’s tactics.

“The high standards of consensus among ourselves and of maintaining unity with the Holy See and the Universal Church as set forth by Cardinal Ladaria is far from being achieved in the present moment,” it said.

“Moreover, as [Ladaria]’s sound theological and pastoral advice opens a new path for moving forward, we should take this opportunity to re-envision the best collegial structure of achieving that.”

Five days later, however, Gomez sent a letter to all the US bishops stating that it is within USCCB procedural policy to proceed with the proposed discussion later this month.

This was followed by statements from a number of Gomez allies, including Archbishops Salvatore Cordileone of San Francisco and Samuel Aquila of Denver, both of whom issued statements indirectly critiquing the Gregory-Cupich letter and insisting the debate proceed.

The letter in question ends with a request that it remain private, and it is not presently clear who leaked it to The Pillar. All things Gloria Purvis: an interview on faith, Catholic media, surviving 2020, and her new podcast