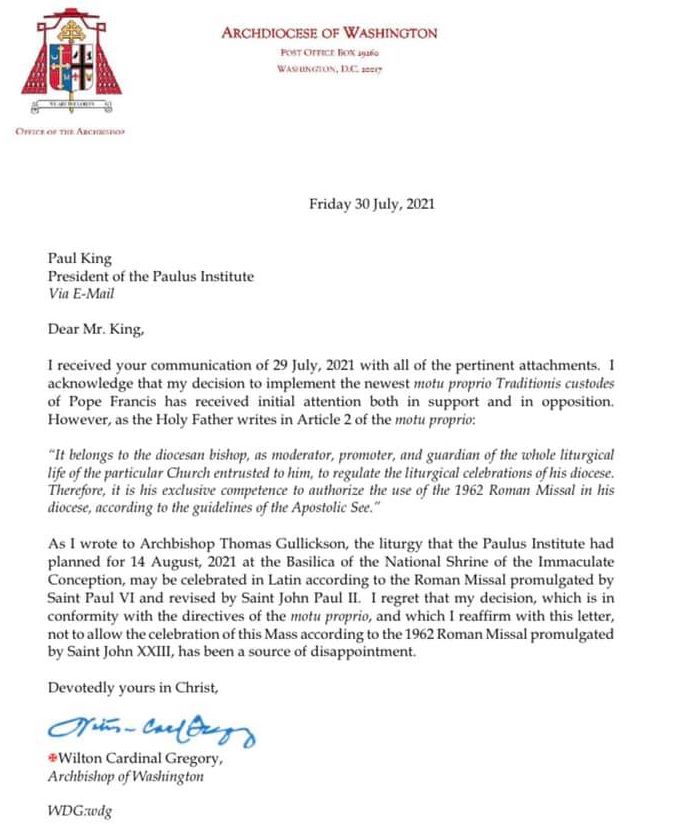 Cardinal Wilton Gregory facing opposition, misinformation in the wake of his restrictions on a DC Latin Mass

A Latin Mass scheduled for August 14th in the nation’s capital will not take place as planned, following Cardinal Wilton Gregory’s decision last month to revoke permission for its use of the pre-Vatican II liturgical form.

The celebration was to be a pontifical High Mass at the Basilica of the National Shrine of the Immaculate Conception celebrated by the retired Archbishop Thomas Gullickson, who last served as apostolic nuncio to Switzerland and Liechtenstein.

Gullickson made waves in 2015 when his open criticism of Pope Francis on Twitter and his former blog made international headlines. (In 2019, Pope Francis would directly rebuke apostolic nuncios who “criticize the pope behind his back” or use blogs to show hostility to him or other higher-ups in the Church.)

The organizer of the Mass was the Paulus Institute for the Propagation of Sacred Liturgy, a Traditionalist organization founded by Paul King and James B. Sebolka.

The Mass in DC had originally been approved by Gregory prior to the release of “Traditionis”, which was accompanied by a letter—nearly three times as long as the motu itself—explaining that his decision came after a survey sent to bishops worldwide.

“The responses received revealed a situation that pains and worries me, confirming the need to intervene,” the pope said in the letter.

Gregory sent new instructions to Gullickson thereafter, and on July 29th, officials of the Paulus Institute sent a lengthy six-point letter to Gregory asking that he reconsider (and respond by August 2nd).

Gregory responded the very next day, July 30th, reiterating that Pope Francis’ new rubrics give him exclusive say over what occurs in his diocese in regards to the TLM.

Contrary to previous reports indicating he had canceled the Mass and “cited Traditionis Custodes as the reason, without further specificity”, Gregory had in fact given organizers permission to celebrate a Latin-language Mass in the Ordinary Form—which Pope Francis in his letter called “the unique expression” of the Roman Rite.

Back in mid-July, Gregory—like many bishops around the country—issued a statement immediately after the release of Francis’ new documents, indicating therein that until a more formal plan could be put into place, he would make no changes to the regular celebrations of the Latin Mass taking place in his diocese.

However, this instruction did not apply to special celebrations like the Paulus event.

In his motu, Francis specifies that Latin Masses should not take place in “parish churches", opening the possibility for celebrations to take place at non-parishes like the DC basilica—a point harped upon in the Paulus officials’ protest letter.

As it is, though, Gregory seems to have also taken the other stipulations of the pope’s documents into account, including the more general concern of “the close relationship between the choice of celebrations according to the liturgical books preceding the Second Vatican Council and the rejection of the Church and its institutions”.

For his part, Gullickson began to openly speak ill of Gregory in the wake of the DC prelate’s decision, using his new blog to accuse Gregory of trying to “scatter the sheep” as an act of “violence” by disallowing the High Mass.

A similar, if not even more virulent tone has been seen among the Traditionalist laity, many of whom seem to have opposed Gregory since long before his elevation to the archbishopric of Washington.

Criticism aside, some US bishops have taken a different approach than Gregory (and the rest of the majority) on how to proceed in the wake of the groundbreaking decision from the pope.

One in particular, Bishop Anthony Taylor of Little Rock, immediately suspended the Latin Mass in all but two churches in his diocese—forgoing any delay.

Among the Black bishops, Joseph Perry of Chicago—known for a decidedly different liturgical flair than Gregory—will move forward with a Latin Mass this week, celebrating a Pontifical High Mass in Philadelphia on August 15th. Where to find a Black bishop this Easter weekend (2022 edition)