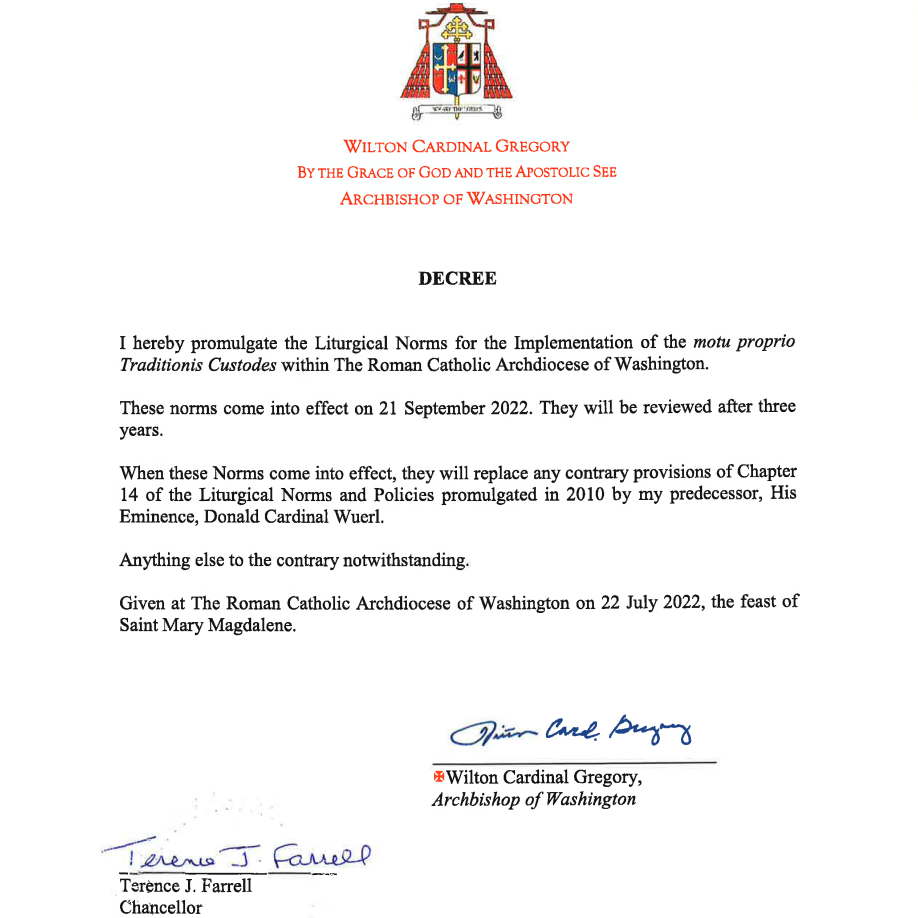 The long-awaited liturgical norms for the Traditional Latin Mass in the Archdiocese of Washington have arrived, in the form of a letter sent by Cardinal Wilton Gregory to local priests on Friday morning.

“Effective September 21, 2022, three non-parochial churches are designated as locations where the Mass according to the 1962 Roman Missal may be celebrated,” reads an accompanying press release.

The move follows Pope Francis’ watershed motu proprio “Traditionis Custodes” issued last July, which reversed allowances of the TLM that had come by the way of his predecessors Pope St John Paul II and Pope Benedict XVI. An additional apostolic letter, “Desiderio Desideravi,” was released last month and expounded upon the need for liturgical renewal by means of adherence to a single expression of the Roman Rite.

From the onset of the pope’s original announcement, further guidance on celebrations of the TLM was to come from individual diocesan ordinaries, though with no set deadline. Gregory stated last year that he would issue his norms after a period of discernment, stated today to have purposely coincided with the archdiocese’s recently concluded listening sessions for the 2023 Synod of Bishops.

His only move against the TLM before today was the restriction of a single Mass at the Basilica of the National Shrine of the Immaculate Conception last August, where a notably anti-Francis Traditionalist was scheduled to celebrate. The event was ultimately canceled by its organizers, fueling both criticisms of Gregory and rumors of then forthcoming diocesan-wide changes.

The now-public instructions, part of a 9-page document posted publicly on the ADW website, decree that regular TLMs will be allowed only on Sundays at the Chapel at St John the Evangelist Parish in Forest Glen, Maryland; the Franciscan Monastery of the Holy Land in DC; and the Mission Church of St Dominic in Aquasco, Maryland.

As of the new date—the feast of the diocese’s patron, St Matthew—all other sacraments must be celebrated in the post-Vatican II form, “using the books promulgated by Saint Paul VI and Saint John Paul II,” though the Latin language itself may be used. The same rubric will apply to the Church’s most solemn seasonal liturgies, including Christmas, the Easter Triduum, and Pentecost. Ad orientem positioning will not be allowed for such celebrations without special permission.

Additional proposed celebrations of the TLM in the archdiocese will require a request in writing, which will be at the discretion of the archbishop and require an affirmation of the “validity and legitimacy of the liturgical reform dictated by the Second Vatican Council.”

Those priests granted such permissions will be moderated by Gregory’s appointed delegate: the controversial diocesan priest Msgr Charles Pope, recently noted for inviting a known Radical Traditionalist—who once accused Pope Francis of heresy—to his parish for an event in May.

It could be said that concessions of that sort characterize Gregory’s instructions more generally, as rumors had swirled since the pope’s original announcement that Gregory—and other ordinaries like him—would restrict the Latin Mass entirely.

Even so, the new decree is sure to spark ire among many TLM adherents, as several local parishes in DC known for the traditional liturgy—including Saint Mary Mother of God and St Francis de Sales—will no longer be home to regular such celebrations come September.

Gregory, in today’s letter to his priests, notes that the changes are ultimately in line with the direct requests of the sitting Bishop of Rome.

“As my predecessors in the Archdiocese of Washington have followed the intentions of the Holy Father in regards to the celebration of the Mass according to the 1962 Roman Missal, I, too, desire to follow the path most recently traced out for us by Pope Francis,” he said.

“However, it is also my desire, following the intention of Pope Francis, to ensure that those who celebrate the Mass according to the 1962 Missal continue to be provided for in our archdiocese, a plea that was expressed in our Synod listening sessions.”

The final dictum of the new norms for DC notes that they are to be reviewed in three years, suggesting that the pope’s vision of “one, single” Roman Rite remains on the horizon.

Gregory himself, however, will reach the Church-mandated retirement age of 75 this December. Opinion: ​​Purgatory is a roomful of people arguing about the Latin Mass for a thousand years.