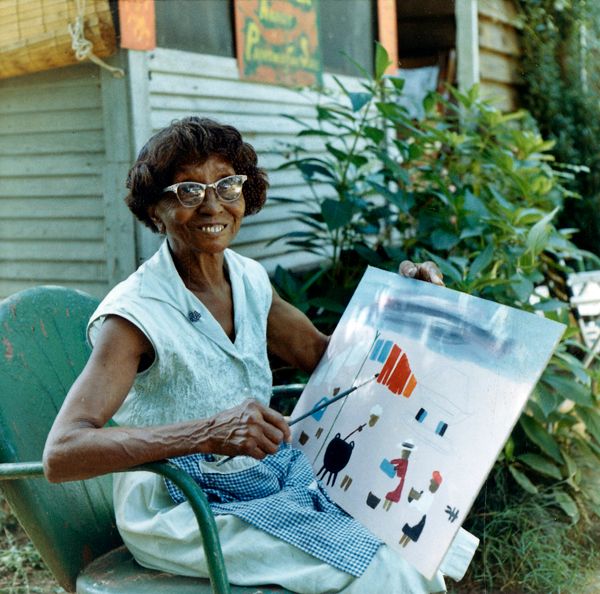 A documentary on the Black Catholic painter Clementine Hunter is making its broadcast debut tonight at 7pm CT on Louisiana Public Broadcasting, according to the film’s official website.

She was born Clémence Hunter to former slaves in the late 1880s, baptized a Catholic at St John the Baptist Catholic Church in Cloutierville, Louisiana, and later became a world-famous folk artist after her paintings became public knowledge in 1939.

“It’s a treasure we happily share with the entire world because of the priceless perspective she provides for us.”

Earlier this month, Shiver made the announcement on social media.

Despite having no formal education in art or otherwise, in her 50s Hunter began creating remarkable folk art depicting plantation life, which she knew from experience on Melrose Plantation in Natchitoches, Louisiana—where she worked and where much of her artwork remains.

Several of her paintings concern religious themes, including “Baptism on Cane River” (1945), “Funeral Procession” (circa 1950), and multiple depictions of Jesus, such as 1959’s “Cotton Crucifixion”.

She originally sold her art for pennies on the dollar, before they became a hot ticket in the art world, fetching thousands by the end of her life.

Despite this, she remained somewhat sidelined from her success for many years, as racist laws in Louisiana prevented her from gaining access to at least one of her own exhibits, namely at Northwestern State University in 1955.

She would receive an honorary doctorate from the school 30 years later.

That same year, she became the first-ever African-American to have a solo exhibit at the New Orleans Museum of Art, and in 2018 she was exhibited at the Smithsonian’s National Museum of African American History in DC—at the time their largest-ever collection by a single artist.

A screening of the documentary came to the museum early the next year.

A similar exhibit is currently on display at the Cabildo in New Orleans through 2022, featuring 50 of Hunter’s pieces and also a forgery of her work (infamously created by William Toye in the 1970s).

An encore will air on Saturday, August 28th, at 8pm CT. Amid family dispute, Aaliyah's later albums come to streaming for the first time