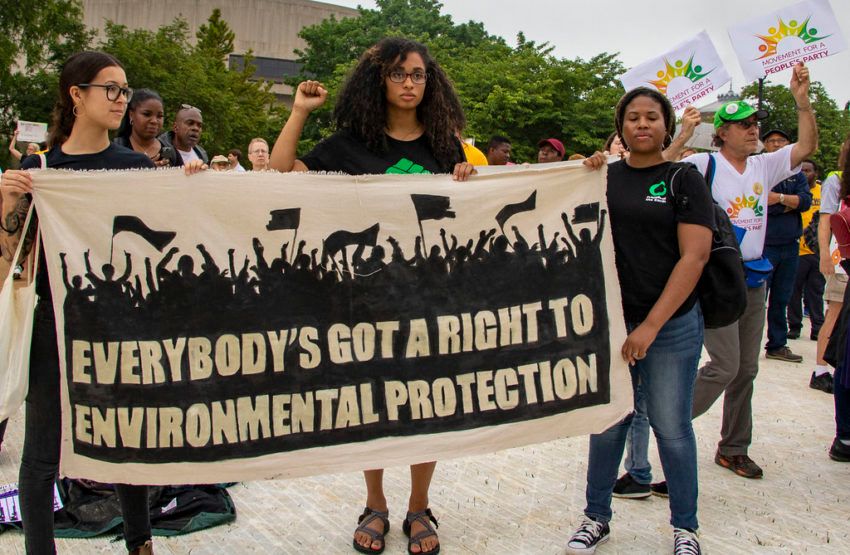 In 2015, Pope Francis sounded the alarm for Catholics on the issue of climate change with his encyclical “Laudato Si’”.

“Climate change is a global problem with grave implications: environmental, social, economic, political... It represents one of the principal challenges facing humanity in our day.”

Six years later, the latest Intergovernmental Panel on Climate Change (IPCC) report, released in August 2021, provided an extremely dire warning for our globe and for humanity. UN Secretary-General António Guterres, a devout Catholic, said the report was nothing less than “a code red for humanity.”

“The alarm bells are deafening, and the evidence is irrefutable.”

The election of President Joe Biden has been a huge step forward for the United States in regard to action on climate change, following the failures of the Trump administration. Aside from rejoining the Paris Climate Agreement, in April, Biden organized a virtual Leaders' Summit on Climate held on Earth Day that convened 40 world leaders to rally the world in tackling the climate crisis. There, Biden announced a new US target: cutting greenhouse gas emissions by 50% - 52% from 2005 levels by 2030.

For those not convinced that climate change is one of the most pressing issues facing our world today, I would invite them to visit me in Northern California. Since 2017, our region has experienced increasingly deadly and destructive wildfires every summer.

Not only are people in the paths of the fires forced to evacuate their homes—in worst-case scenarios losing them entirely—but the thick and far-reaching smoke congests the sky, causing such bad air pollution that outdoor activities like school sports and gym class are canceled and residents are forced to shelter in their homes.

According to National Geographic, “Increasing heat, changing rain and snow patterns, shifts in plant communities, and other climate-related changes have vastly increased the likelihood that fires will start more often and burn more intensely and widely than they have in the past.”

While fires ravage the West, historic storms such as Hurricane Ida have devastated the Southern, Midwestern, and Eastern United States, and climate change is a huge factor.

ABC News outlined the ways warming temperatures have increased the frequency and strength of storms. Hurricane Ida is recorded as the fifth-strongest storm to make landfall in Louisiana, resulting in 26 deaths in the state, 4 in the Southeast, and at least 52 deaths throughout the Northeast (as far away as New York, which suffered dozens of casualties and deaths).

Like many areas of life in the 21st century, there is also a disparate impact of climate change on low-income people and communities of color both in the Global North and Global South.

Catholics United For Black Lives (CUBL) recently raised awareness about environmental racism in the United States and its connection to redlining, the racist federal government policy created in 1934 under the New Deal legislation. Richard Rothstein, author of “The Color of Law”, defines redlining as a “state-sponsored system of segregation."

Therein, the government created White middle-class and lower-class neighborhoods in suburban communities by subsidizing housing loans while refusing to insure mortgages in African-American neighborhoods, which forced many Black people into housing projects. One requirement of the loans in the White neighborhoods was that none of the houses be sold to African-Americans.

Not only has redlining resulted in massive wealth inequality, as the new White homeowners were able to accumulate and pass down wealth from their homes, but Black neighborhoods have also typically been closer to toxic chemical sites, freeway and airway pollution, and landfills.

As CUBL pointed out, 56% of people who live within 2 miles of hazardous waste factories are people of color, urban flooding is more likely to impact Black neighborhoods, and almost all heat zones are located in impoverished and formerly redlined neighborhoods.

Though countries in the Global South—low-income countries in Asia, Africa, and South America—are for the most part not responsible for the emission of gases leading to climate change, they have been suffering first and worst from the overheating planet.

In July, the V20 Climate Vulnerables Finance Summit, a landmark meeting of leaders from 48 low-income countries inhabited by 1.2 billion people, was held in Dhaka, Bangladesh. However, Western media was completely silent and did not discuss the meeting, findings, or position these countries articulated in anticipation of the United Nations’ COP26 Climate Change Conference this November.

“We should be particularly indignant at the enormous inequalities in our midst, whereby we continue to tolerate some considering themselves more worthy than others. We fail to see that some are mired in desperate and degrading poverty, with no way out, while others have not the faintest idea of what to do with their possessions, vainly showing off their supposed superiority and leaving behind them so much waste which, if it were the case everywhere, would destroy the planet. In practice, we continue to tolerate that some consider themselves more human than others, as if they had been born with greater rights.”

In the face of an issue that often feels so large and out of our control, Pope Francis reminds people that little daily actions add up. We need a personal conversion away from senseless and wasteful consumerism. We need to educate ourselves about environmental responsibility. And even large-scale boycotts of certain products and businesses destructive to the environment, when done in tandem, can create change. As the 2017 Carbon Majors Report found, just 100 companies are responsible for 71% of global emissions.

As I myself proposed on Twitter—later expounded upon by Doug Girardot in America Magazine—something as simple as abstaining from meat every Friday can make a difference.

As Pope Francis stated, “Strategies for a solution demand an integrated approach to combating poverty, restoring dignity to the excluded, and at the same time protecting nature.”

Young climate activists like Greta Thunberg in Sweden, Vanessa Nakate of Uganda, Isra Hirsi (daughter of congresswoman Ilhan Omar), Autumn Peltier in Canada, and many others have bemoaned that adults are responsible for the current environmental destruction younger generations will have to deal with.

Young activists gathered, marched, and protested last month in Milan, Italy ahead of COP26 for a three-day Youth4Climate summit. There, Thunberg called out adult leaders:

“This is all we hear from our so-called leaders: words. Words that sound great but so far have led to no action. Our hopes and dreams drown in their empty words and promises.”

Pope Francis agrees with these young people and believes it’s our responsibility as Catholics to protect the environment for future generations:

“The notion of the common good also extends to future generations. The global economic crises have made painfully obvious the detrimental effects of disregarding our common destiny, which cannot exclude those who come after us. We can no longer speak of sustainable development apart from intergenerational solidarity. Once we start to think about the kind of world we are leaving to future generations, we look at things differently; we realize that the world is a gift which we have freely received and must share with others.”

Pope Francis continues to lead the charge to urge the faithful to act on climate change. On October 4th, the pope convened religious leaders from around the world at the Vatican. A document signed by about 40 religious leaders and scientists was presented to the president of the COP26 summit, and a summary read:

“We plead with the international community, gathered at COP26, to take speedy, responsible and shared action to safeguard, restore and heal our wounded humanity and the home entrusted to our stewardship.”

As Black Catholics, it’s time to prioritize solutions to climate change. With our communities most heavily affected and our lives and livelihood on the line, we must care for our environment and protect it as we advocate for the unborn.

The decisions we make today dictate the world our children—and generations to come—will live in.