Excerpt: 'A journey of hope' in the life of a Black Jesuit

Patrick Saint-Jean, SJ narrates his experience as a seminary student struggling against racism—all while navigating life as a Jesuit and as a Black Catholic new to America.

Part of our Jesuit formation is to do a form of pilgrimage. For us in the Jesuit province of the U.S., most of the time, we received $35 and a one-way bus ticket, then you are out on your own for 30 days. The purpose of this journey is to learn how to deepen our trust, care and love in Christ through others, while gazing at the horizon to find grace to survive as a Black body in a white space.

A few years ago, on Easter Sunday, I embarked on a quest for hope, seeking to find the grace to live as a Black man in the Society of Jesus within America. My destination was the South, where I knew Blacks had a long history of suffering under the rope of racism. Some of my Jesuit superiors did not fully understand why I felt the need to make this journey, and they were concerned about my safety.

I, however, had spent a long period praying for discernment, and I was confident I was following God’s will for my life. I knew I needed to come to terms with what God was asking of me from within the crucible of racism—and so I prayed for healing of the countless wounds left by the microaggressions I had experienced; I prayed that my eyes would be opened to a spiritual reality that would allow me to confront racism with interior awareness, trust, and an audacious belief in new possibilities.

When I reached New Orleans, my prayers were answered. There, in that magical city with all its charm, jazz, and French vibe, I felt at home. For the first time in years, I was with brothers and sisters who shared my skin color. Surrounded by a vibrant Black community, I regained a sense of my own identity.

While I was there, I met with the Auxiliary Bishop of New Orleans, Fernand J. Cheri, who shared his experience of being a Black man within the predominantly White Catholic Church. Before becoming a priest, he had been refused ordination multiple times due to the color of his skin. As he talked with me, I began to comprehend more fully the price a Black person pays because of racism.

“Patrick,” he said to me, “the Jesuits will just have to accept you with your blackness.”

I had felt suffocated by the prejudice I had encountered since coming to America, but now Bishop Cheri’s understanding and compassion breathed oxygen into my lungs. I realized he had not allowed racism to be a dead-end street going nowhere. Although Jesus suffers and dies anew in the crucible of racism, Bishop Cheri helped me understand that the Black community can also be a place of Resurrection.

The morning after this conversation, I woke up feeling as though I had been transformed. I was no longer someone ruled by skepticism and fear, caught in a vicious cycle of reaction to microaggressions. Bishop Cheri had given me back my roots, my connection to God through the Black community, and in doing so, I had become a new person—someone who was able to embrace possibility.

Racial injustice had left me traumatized. Afraid of being hurt still more deeply, I had allowed myself to become numb. Preoccupied with my selfish fears, I was blind to the reality of my Jesuit brothers. Now, however, I returned to the Society with a new perspective. I realized that the Jesuits in America are unavoidably infected by the disease of racism; they are a microcosm of the larger society that contains them. I understood that they too had been wounded by systemic racism. They were still growing, just as I was, and like me, they had both weaknesses and strengths.

As I focused on the possibility of healing, I found that my brothers began to accept me, despite their difficulties, as an act of love. Together, we could enter into a relationship built on trust, rather than fear and defensiveness. Together, we could say, “We are sinners who need grace. We are men who struggle with race relations. We need each other’s prayers in order to move from ‘Jesuitica indifference’ to racial action.”

My prayer life deepened as my imagination took fire. Committed to be an agent of change and reconciliation, I looked to the future with new hope. And all this evolved from the catalyst of a simple conversation, a conversation that led to a resurrection of divine love in my life.

The fourth “week” of The Spiritual Exercises focuses on the joy of the Resurrection. That sense of exhilaration and possibility is the foundation of our call to share in Christ’s mission of justice and reconciliation. During this phase of our spiritual journey, Ignatius directs us “to ask for the grace to rejoice and be glad intensely at so great glory and joy of Christ our Lord,” as we:

“consider how the divinity, which seemed to hide itself in the passion, now appears and shows itself so marvelously in the most holy resurrection by its true and most holy effects.”

“To be glad intensely” is a keynote of Ignatian spirituality. The practice of following Christ that Ignatius taught is not a gloomy asceticism that focuses on guilt and sorrow; instead, it is the experience of “fullness of joy” in the Divine Presence (Psalm 16:11), while all the while continuing to live in the physical world. During this fourth phase of the Exercises, we learn to find the Living God everywhere.

“Resurrection,” wrote Jesuit author Kevin O’Brien, “refers to the event of God’s transformation of life, making all things new, as in a new creation.” He went on to note:

We marvel at how Jesus in the resurrected life—where his divinity is no longer hidden—does very human things: eating, talking, consoling, teaching, and enjoying the company of others. As with the mystery of the Incarnation, we see in the Resurrection how our divinity and humanity are not opposed but are an integral part of each other.

The divine perspective we encounter in this fourth phase of the Exercises is one of light and hope—but it is not a simplistic, pie-in-the-sky happiness that closes its eyes to real-world problems. And it is not easy. Like the other three stages of the Exercises, the fourth also challenges us to let go of our focus on our limited, selfish viewpoints; it requires a “persistent emptying of the self.”

This excerpt is adapted from the “Crucible of Racism: Ignatian Spirituality and the Power of Hope” (Orbis Book, 2022). No part of this publication may be reproduced or transmitted in any form or by any means, electronic or mechanical, including photocopying, recording, or any information storage or retrieval system, without prior permission in writing from the publisher. 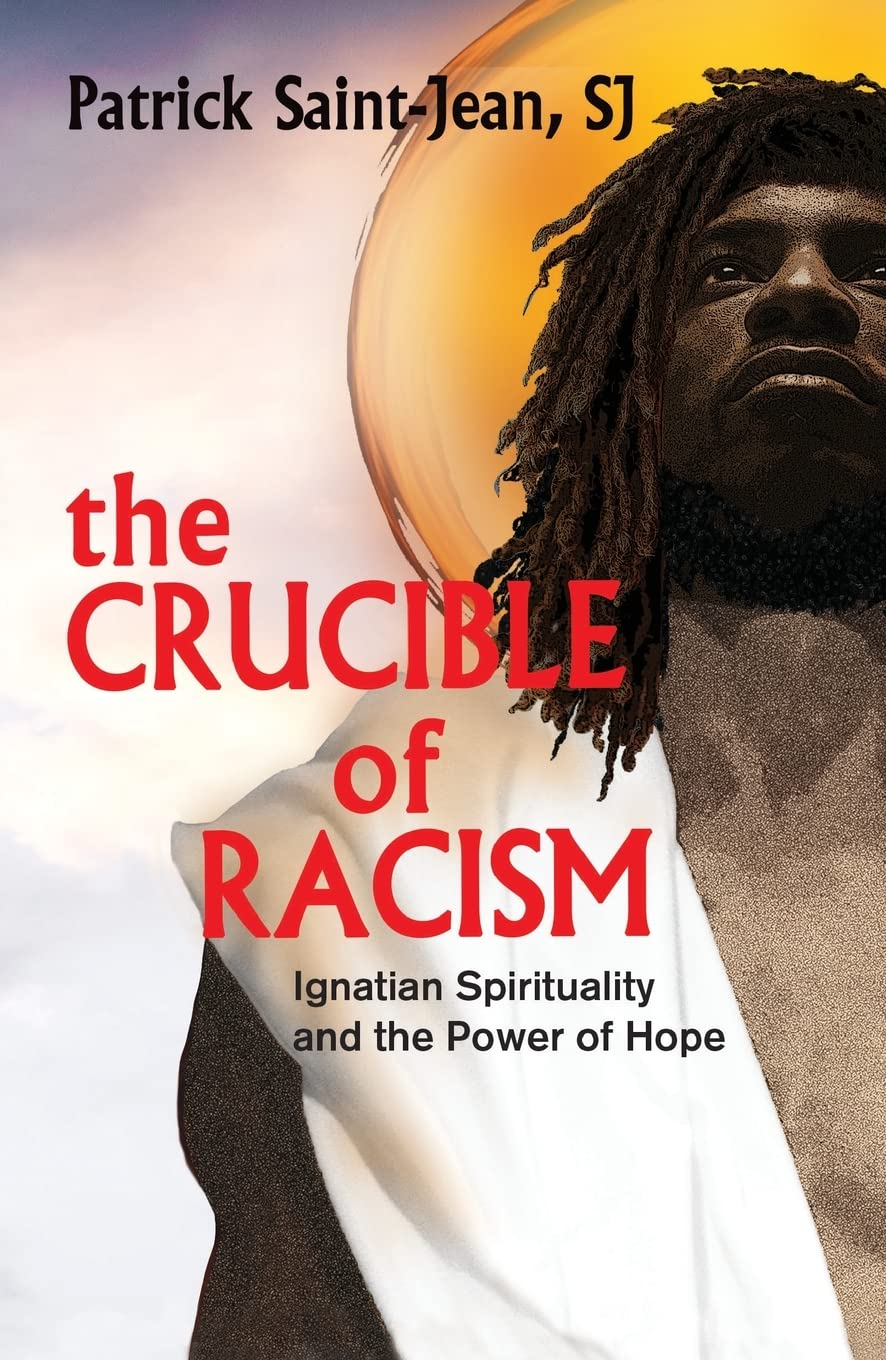 The Crucible of Racism: Ignatian Spirituality and the Power of Hope

Upon coming to the United States to pursue graduate studies and then to embark on training as a Jesuit, Haitian-born Patrick Saint-Jean discovered something he had not known before: racism. In describing this painful journey, which included becoming aware of the ambiguous history of his own Jesuit order, Saint-Jean embarked on a fresh reading of The Spiritual Exercises of St. Ignatius. The basic principles of Jesuit formation―the “discernment of spirits,” the examination of conscience, the imaginative identification with Jesus in his sufferings, death, and resurrection―became an entry to his own journey of hope and resurrection.

Patrick Saint-Jean, S.J., PsyD teaches in the psychology department at Creighton University in Omaha, Nebraska, where he is also a psychotherapist. He enjoys jazz, traveling, and learning new languages; and he plays the guitar, harmonica, and drums. He also likes a cup of hot water in the morning.