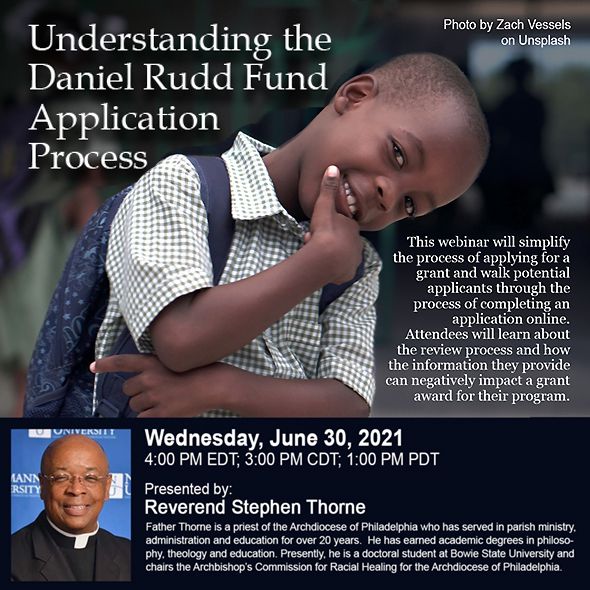 The National Black Catholic Congress will hold a webinar today at 3pm CST to discuss the Daniel Rudd Fund (DRF), their in-house initiative which supports Black Catholic ministries and institutions that fulfill some part of the 2017 NBCC Pastoral Plan.

The event will be led by Fr Stephen Thorne, a priest of the archdiocese of Philadelphia and director of the DRF.

He will explain during the webinar how to apply for a grant, which involves explanations of a program’s budget, impact, and scope, as well as a letter of recommendation from a bishop, religious superior, or Catholic leader of a national organization.

The fund was started as the Daniel Rudd Fund for Black Catholic Activities in 2013, following Congress XI the previous year. Its namesake, Daniel Rudd, was a legendary Black Catholic journalist and advocate from the late 19th and early 20th centuries.

The DRF was formed to adhere to that congress’ Pastoral Plan, a document issued after each congress as a guide for Black Catholic ministry for the next five years (until the next national gathering).

The next round of grant recipients must adhere to one of the ten priorities listed in the 2017 Plan.

According to the NBCC website, recent grantees from the fund include the archdiocese of New Orleans, which was awarded a grant to develop a Black Catholic curriculum for its schools; Victory Youth’s Merrick Center in DC, which provides outreach to at-risk Black male youth; and Workshop Way Preschool, a preschool in Powhatan, Virginia.

Last year produced the largest disbursement in the history of the fund, with 22 grantees receiving a little over $100,000. It was the largest since the first two years of the fund, when the totals were each $95,000.

The grant cycle for the fund opens tomorrow, and applications must be submitted online.