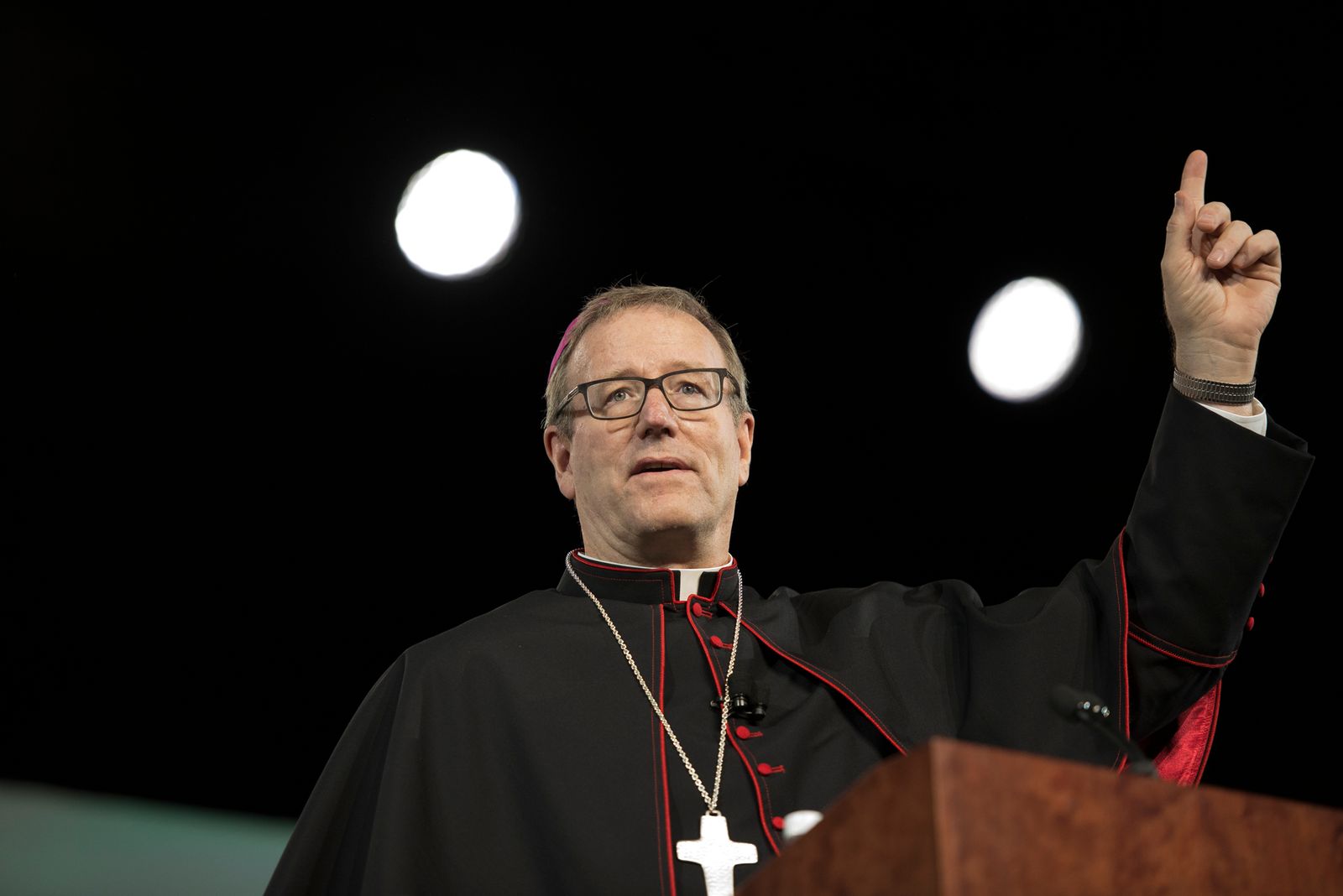 Once upon a time, these words were famously sung by Bob Dylan to “writers and critics”:

“Keep your eyes wide, the chance won’t come again… the times, they are a-changin’.”

Despite his love of all things Bob Dylan, Bishop Robert Barron of Los Angeles seems to have shut his eyes to the changing times.

Having specialized in building an online presence tackling the challenges presented by mostly White and angry atheists, he has sought to be equally relevant in the social-justice-movement debate that is growing in the United States and around the world.

He has done this by writing a series of essays on Word on Fire, and in other outlets and formats (including interviews). That effort has involved framing most modern social-justice activism as “woke” and rejecting “wokeness” as “vile"—an adjective he used in an interview with the Babylon Bee podcast.

In a recent interview, he admitted that he was using a special definition of “woke” to condemn it. When asked whether saints like Oscar Romero are "woke", he said:

“No! I mean, if you want to define ‘woke’ as simply being alert to social injustice and passionate about addressing it, then sure, they were ‘woke.’”

In other words, despite the fact that “woke” colloquially describes alertness to that which oppresses them, Barron has decided to use a specialized definition to then condemn those working for social justice now:

“the term [‘woke’]... has a much more definite meaning, and those great figures would not be the least bit sympathetic with contemporary ‘wokeism,’ it seems to me.”

His definition and criticism are premised on the notion that those who are woke are not Christian, do not believe in objective morals, and do not seek to develop cooperative social structures.

Rather than showing a cultural awareness, this critique shows that, like Rip Van Winkle—to borrow an analogy from Martin Luther King, Jr.—Barron has slept through a revolution in the Church.

Catholic ministries have spoken out in solidarity with Black Lives Matter. Bishops and priests have joined Black Lives Matter protests. The Pope has voiced support for the various BLM protests and the clergy participating in them.

The Holy Father even invited non-Catholic NBA players to the Vatican City for a meeting occasioned by their outspoken support for social justice causes. He also criticized American Catholics for not joining in protests against George Floyd’s murder.

And this is just the Catholic participation in “wokeness.’

The family of MLK has also spoken out in favor of BLM, most directly by presenting the founders with The Beloved Community 2021 Social Justice Award. That award is meant to honor individuals who are committed to building the “beloved community” through efforts to create a more “just, equitable, peaceful, and non-violent society.”

In response to that honor, Alica Garza (one of the founders) said that they walked in the footsteps of MLK. Another, Opal Tometi, explained that she identifies with the same faith as MLK—i.e., Christianity—and that the award was particularly meaningful to her as a Christian.

This is hardly the “Cultural Marxism” Barron would have us believe “woke” movements like BLM embody.

In one “anti-woke” essay, Bishop Barron claims that there is a divide between current “woke” efforts to achieve racial justice and past, religiously-inspired movements. Indeed, in that essay he argues that there is an “abyss” between the religious and woke-ist activists.

Yet, as discussed above, we see that there is a religious element to BLM, and that there are many religious Americans and Catholics—including the Pope—that have had no problem participating in this and other "woke" movements.

Barron's use of MLK in his essay is particularly ironic in light of The King Center’s support and awarding of the Black Lives Matter founders, and Tometi’s Christian witness while receiving the award.

As an attorney, I know that all witness depends on credibility. When witnesses miss key and obvious facts, their credibility is called into question and, as a consequence, so is the value of their witness. Here, Barron has missed the clear and notorious participation of Christians in Black Lives Matter and modern, 'woke' social-justice work.

And not only has he missed this, but he has emphatically insisted that the opposite of this reality is true. Despite the fact that there is a direct connection between the work of MLK and modern activism toward progress, Barron has invoked Dr. King himself in an attempt to douse the growing flame of justice.

As Christians, we are called to live for and embrace truth. When a media-savvy bishop articulates a world view that depends on the inverse of reality, the witness of the Church itself is imperiled. After all, how can you evangelize and minister to people who you cannot even see or understand?

MLK warned his fellow Christians of this problem in his sermon, “Remaining Awake Through a Great Revolution”. Therein, he connects Christ’s message that he “make[s] all things new” to the story of Rip Van Winkle. He admonishes the listener that:

“one of the great liabilities of life is that all too many people find themselves living amid a great period of social change, and yet they fail to develop the new attitudes, the new mental responses, that the new situation demands. They end up sleeping through a revolution.”

Despite Barron’s criticisms of “collective guilt,” Rev. King makes it clear that “racial injustice is still the black man’s burden and the white man’s shame.” He explains that to address racial injustice it is essential that “everyone must share in the guilt as individuals and as institutions” and that “even the Church must share the guilt.”

To be co-workers with the Almighty is to work actively towards racial justice—which means the Church itself must do the work of justice by first admitting its sins. This requires truly seeing the track record of the many Church leaders and laity who participated in White Supremacy and materially benefited from it. It requires being awake to the revolutions happening before us, and seeing and supporting Catholics involved in and contributing to social-justice movements—including BLM.

With respect to Bishop Barron, the issue is not whether the Church will embrace “wokeism.” Our Pope has already voiced support for BLM protests, Catholic clergy are marching, and BIPOC Catholics as well as their allies are also taking active roles in demanding racial justice.

The only question is this: will Bishop Barron wake up and strengthen the prophetic witness of the Church in the work of racial justice? Or will he spend this critical time helping others sleep through this Great Revolution of racial justice and—like Rip Van Winkle—find that he is out of step with the Church as it works to build the Kingdom in the 21st Century?