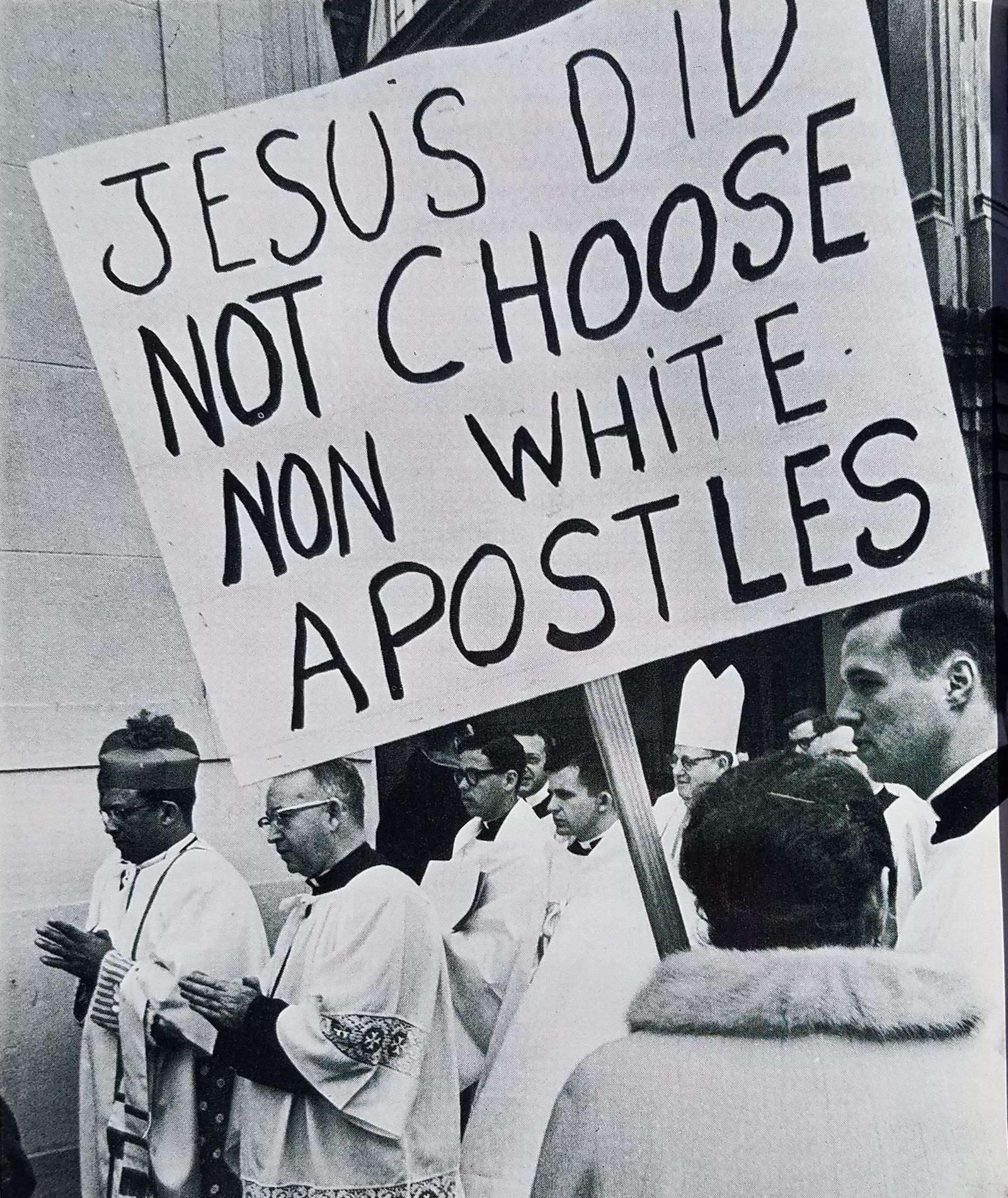 This year will mark the 20th anniversary of Cardinal Bernard Law’s resignation from the Archdiocese of Boston, the culmination of a long—and long overdue—affair of monumental proportions, one which broken open the seal of secrecy and deceit that hid the Church’s sex abuse scandal from public knowledge.

This week, I watched the 2015 film “Spotlight”, which covers the Boston story, for perhaps the fourth or fifth time. It is one of the few films I care to repeat even once, and perhaps the only one that I re-watch for impact rather than entertainment. It is probably my favorite film of all time.

I saw it when it was released, because it was an Oscar contender. I saw it again when I convinced my closest Catholic friend to finally give it a viewing. He was hesitant, for obvious reasons, and I was more than a little antagonistic.

My conversion was relatively swift, and it certainly had nothing to do with the Church hierarchy’s ability to handle scandal. On sex abuse, my opinions concerning the bishops and their response are about the same now as it was when I was still a staunch Protestant—and one quick to point the finger at Catholics on that, and just about everything else.

But when I came to be convinced of the Church’s teachings about what it is and why, that seemed to be all that mattered. I felt no other option than to become what my grandparents had been, and my great-grandparents before them. I became a Black Catholic.

With that change came new baggage, however, which I am only beginning to fully grapple with. Not the kind that would change, for me, the decision to convert, but certainly the kind that would make one sit for a while and wonder about his or her place in the Church and its larger narrative.

In my now two years as a Catholic, I have come to believe that the Church is covering up the scandal of racism.

Watching “Spotlight”, it’s easy to see it as fiction. A fantastical story of heroes and villains and miracles that happened once and is not bound to repeat itself anywhere else or on any other issue. A fortunate fluke. Made for Hollywood, and that alone.

However, as a green Black Catholic, a convert who joined up just in time for a global pandemic, an international racial reckoning, and a domestic sociopolitical upheaval that has revealed the worst impulses of the dominant race-caste in our nation and our Church, I wonder: does the light still work?

In the film, the subject is Boston. Perhaps the Catholic capital of the USA. Ripe for faith, but also for intricately ordered campaigns of communal silence. Along that train of thought, it’s notable that Boston is also another kind of capital.

I mean to say that Boston is, by some estimates, the most racist city in America.

When I think about that, it makes “Spotlight” all the more curious—masterful cinematic work that it is. It is a Catholic story, with Catholic protagonists, Catholic opposition, Catholic victims, Catholic onlookers, and all the rest. But it is also quintessentially White.

Though you might not guess it, Boston has been roughly a quarter Black demographically since at least the late 1980s, and the archdiocese currently boasts of 16 Black parishes, according to data from the National Black Catholic Congress.

Watching my favorite film, however, I would never know it. In all of its winding coverage of various conversations, victims, cases, and locales, “Spotlight” has all of two Black characters—whom I would estimate shared a grand total of 25 seconds of screentime, a single speaking line, and no obvious connection to Catholicism whatsoever.

In the larger media narrative, I gather that apart from a few articles in the past five years (with a heavy emphasis on the past two), Black Catholics are largely invisible in the story of the Church’s sex abuse sins—despite clear evidence that our communities are where priests were often shuffled to upon discovery of their crimes in their native White parishes.

(And by that I do not mean to imply that there were no Black predator priests. There were, in no insignificant number, and that story is largely untold as well.)

In the end, there does not appear to ever have been a “Spotlight”-esque investigation of the Church’s treatment of African Americans generally, from the time we were dragged unwillingly into this land—largely at the Church’s hands—to the present day, in which we continue to be abused in more ways than one.

Considering the disproportionate Black parish closures (some of which were canonically illegal), the continued neglect of Black vocations, the near extinction of Black bishops, and the entrenched anti-Black attitudes displayed by bishops around the country, one can only imagine what would be uncovered if one were to thoroughly investigate the actions of the hierarchy toward African Americans in even just the past century.

Even as Pope Francis prepares his global 2023 Synod of Bishops, meant to elevate the voices of the marginalized in (and functionally outside) the Church, there seems to be no concerted effort to ensure that Black Catholics will be included properly. We are mere months away from being locked out of the process, discarded yet again.

It is a tragic note, and yet all too familiar. Who will pity us when the dust settles? The numbers there are few as well.

I am grateful for the voices over the centuries who have attempted to make known to the world our plight as African Americans in the Church, especially those who were bold enough to bring their concerns directly to Rome. These include Fr Joseph Anciaux, SSJ, a Belgian-American priest who penned for Vatican eyes a 46-page booklet describing the “Wretched Condition of Negro Catholics in America” in 1903.

“Anciaux detailed how the segregation in Catholic churches/schools...in many cases, prevented their children from receiving a Catholic education. He reproached the vast majority of American priests for ignoring blacks, either because of racism or fear of negative White reaction...

He claimed that, with [few] exceptions, American bishops failed to defend/protect the rights of Blacks, because they, like their priests, feared White backlash... American clergy [committed] not only the sins of timidity and respecting human opinion over divine law but [also] racism.”
(“Desegregating the Altar”, Dr. Stephen J. Ochs)

As a convert who has read the histories, met the bishops, endured the backlash, and is currently studying at the very collegiate institution the US bishops established as our national Catholic university, I feel I know the answer all too well.

African-American Catholics have no advocate, no jurisdiction, no saints, no quarter, no voice, and no choice but to forge ahead with little more than hope that somehow things will get better. (And I’m not sure any of us are particularly confident on that front.)

Recent reports say we are leaving the Church at an alarming level. I am doubtful of the numbers myself, but I’m also ignorant. Maybe I just don’t want to believe it’s really true that what I’ve come to embrace, after so many years rejecting it, has become for others an unacceptable byword—an embodiment of what’s wrong with Christianity rather than what’s right.

I myself will stay. I have no choice. The faith is in me now, and I believe. That’s enough for me. But for others, who expect of the Church a certain tangible expression of the teachings it claims to harbor and uphold, they will be satisfied only with action.

That, of course, is not likely to come from the US hierarchy. But thankfully, they are not all there is to Catholicism. Though our bishops are indeed obstinate and detached, in true American fashion, they do answer to a higher authority—and not just the Lord Jesus.

It is my hope, then, that in this century, the vicar of Christ will hear and answer Black Catholics in their plea for acknowledgment and justice, be it via the Synod or whatever other means are necessary.

If it takes another “Spotlight”, then so be it.