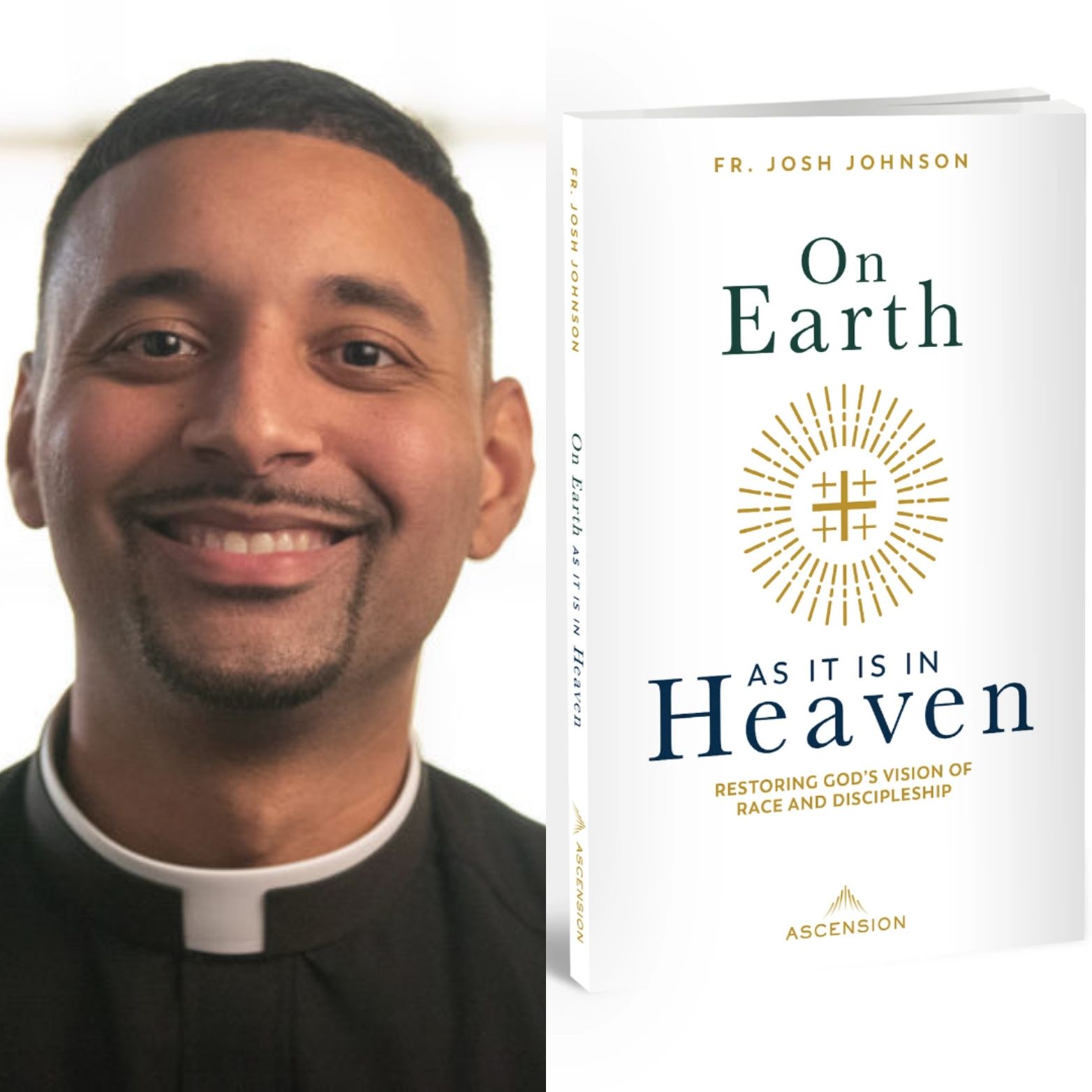 I cannot say that I’ve read a lot of Catholic books that have left me with a burning hunger in my heart for Eucharistic adoration in a mysterious or profound way.

I can, however, say that Fr Josh Johnson’s new book, “On Earth as It Is in Heaven: Restoring God's Vision of Race and Discipleship”, checks all of the above boxes. The 170-page offering, released by Ascension Press earlier this month, addresses the racial divide in the Catholic Church and in the nation at large, exploring the relationship between the two.

He also analyzes the racial divide through a rich Catholic lens, drawing from the wellspring of Catholic thought—including prominent saints such as Thomas Aquinas, Augustine, and Ambrose. He tells their stories and also quotes popes, encyclicals, and scripture. And not only does he quote Catholics of antiquity and the medieval era, but he also cites the work of many contemporary scholars, authors, priests, and bishops.

Johnson wisely opens the book with a prayerful invitation to explore his story with an open mind and heart. Contrary to the misconceptions of many, that the priesthood is primarily about having authority, Johnson delivers the timely message that the duty of a priest is first and foremost that of love, sacrifice, and service to God and to the Church. In addition, he prudently encourages the reader with a prayer of deliverance to recite before continuing the book.

“On Earth as It Is in Heaven” can be described as theological, philosophical, and deeply spiritual all in one. In recounting his one-on-one experiences, Johnson reminds us that God is never far away from us. One particularly powerful statement stuck with me during the duration of the book. He described St. John’s vision of worship before the throne in Revelation 7:9-12, writing:

Johnson uses the term “all in all” to demonstrate that God is absolute and perfect love, goodness, peace, and holiness by his very nature. In heaven, Johnson points out, we will be consumed by God’s all-good, all-consuming love. There will be no room for sin or suffering. He adds that, in this vision, a great multitude from every tribe and tongue stand together and worship God.

“When we look at the kingdom of God on earth, particularly as it is reflected in the American church, what do we see? How closely does it resemble St. John’s vision of heaven? … The saints around the throne of God that St. John saw were people from every “nation”, “tribe”, and “tongue” … do our small group Bible studies, RCIA programs, Adoration chapels, Sunday Masses, and parishes in America resemble St. John’s vision of heaven in this way?”

Johnson always acknowledges and celebrates the good, such as the country’s progress in race relations and the ending of Jim Crow. However, he probes the reader to push for more than something good. He challenges us to seek what is holy, and notes that there is always more work to be done.

For example, he writes:

“We have come a long way in healing the racial wounds of many centuries and in transforming the many racially unjust systems that divided America for so long. Slavery and legalized segregation are a thing of the past … these are great strides, and we need to keep this progress in mind. Nonetheless, these very significant advances should not cause us to settle for the status quo. There is always more work to be done on this side of heaven.”

It is with this attitude of encouragement that Johnson invites the reader deeper into his personal experience of being the only African-American priest in the Diocese of Baton Rouge, and to explore the behaviors that continue to perpetuate racial division in the Church. One of the first experiences Johnson shares is an encounter with a White priest who was shaken by a reassignment to a predominantly Black parish. Johnson describes sitting in an adoration chapel alone when someone enters and begins sobbing. When Johnson turns around, he discovers that the man sobbing is another priest.

After some prayer, he asks the priest if there is anything he could do to help, and the priest begins sharing how his superior was reassigning him to a Black church. Through his tears, he explained that he didn’t know any Black people and didn’t grow up around any Black people and that, because of that, he was afraid that he wouldn’t know how to minister to them. Johnson reassured him, providing him with encouragement. Not long after, Johnson was reassigned to Holy Rosary Church in St. Amant, Louisiana. That city in particular has a rough history with race relations.

Johnson and the other priest’s reassignments share some similarities and some differences. They were both reassigned to parishes that were different racially and socioeconomically from what made them comfortable. Johnson had even been advised by his peers to ask to be reassigned to another church due to the poor race relations in St. Amant. However, because he was more familiar with White people, he knew that not every person would think the same way as those who were racist. Due to the other priest not having any experience with Black people, the fear of the unknown brought him to his knees. He had nothing to go by other than what he had been told about Black people. Unfortunately, this priest shared the same mindset as many Catholics who don’t have experience interacting with non-White communities.

Reflecting on the dangers of distance caused by lack of relationships, Johnson says:

“Racial stereotypes can lead to prejudiced feelings about people we do not know, and prejudiced feelings can easily lead to discrimination. The anxiety of the priest I encountered in the chapel may have stemmed from stereotyped views rooted in his limited interaction with African Americans. If he had known and had relationships with Black people, his reaction to being assigned to a predominantly Black parish would more likely have been one of joy rather than fear.”

Johnson goes on to give other examples of how he sees racial division in American parishes, sharing stories from his rosary walks during his time at other parishes. During these walks, he would visit the Black communities around him and invite them to attend church. One parishioner asked Johnson why he kept going to “that” neighborhood. When Johnson explained that everyone should be invited to come to church and partake in the Holy Eucharist, the parishioner pushed back, reasoning that the church had already given them plenty of money through their St. Vincent De Paul ministry, and told him that he needed to slow down because people didn’t like “a lot of change”.

In other words, she was OK with financially supporting underfunded Black communities, but didn’t want the same people from those communities coming into her church. Sadly, this is an all-too-common scenario within US Catholic communities. Elaborating on this phenomenon, Johnson writes:

“Over the years I have met many who want to help the less fortunate with food for the body but not food for the soul, the Eucharist, which is the very means through which Jesus unites us in his body, the Church.”

He brings the point home by noting that Cafeteria Catholics are not just those who pick and choose which hot-button Church teachings to accept or reject, but also those who intentionally don’t do the work to make disciples of all peoples and tongues.

In a later part of the book, Johnson points out how prevalent silence about racism is among Catholic leaders:

“Why is it that some Catholic leaders do not speak up for and do what is right regarding the racial division in our churches and nation? One reason is that they fear controversy and the loss of financial support for their projects and endeavors.”

He draws on the lives of St. Katharine Drexel, Archbishop Joseph Rummel, and the Sisters of St. Joseph as examples of the opposite—those who spoke out, and also went into Black communities and did holy work building schools, funding projects, and spreading the love of Christ and his Church.

He also draws on the lives of the many African saints who have inspired the Church, such as St. Moses the Black and St. Josephine Bhakita, while also championing the African-American holy men and women who are up for canonization, including Venerable Augustus Tolton and Servant of God Thea Bowman.

As a call to action echoing those who walked the talk, Johnson invites readers to both pray with Lectio Divina and intentionally act on it in evangelization. He also creatively encourages Catholics to create their own litanies to pray.

All in all, I highly recommend this book. It would be especially beneficial, first and foremost, for every clergyman in the United States. The book brings an important message and provides wise counsel to White clergy about how to make a better practice of building intentional relationships with Black people. I would also recommend the book to White Catholics who want to be more than “Cafeteria Catholics”, but holy disciples of Christ, growing the Church.

The book also offers a salve for Black Catholics looking for healing. I myself happened to be reading it at the time of the White Supremacist shooting in Buffalo, New York, and Johnson’s voice brought me great comfort. For Black Catholics who are disheartened by the silence of their fellow Catholics on the sin of racism, his words give hope to take our struggle and offer it up to God in the Eucharist.

The overall thrust of this new text reminds us that God mysteriously derives good from suffering, and that he is actively working to end the racial divide by creating an atmosphere and understanding of worship that is, as Johnson says, on Earth as it is in Heaven. On Earth as It Is in Heaven: Restoring God's Vision of Race and Discipleship Two African Americans to be ordained Catholic priests on Saturday