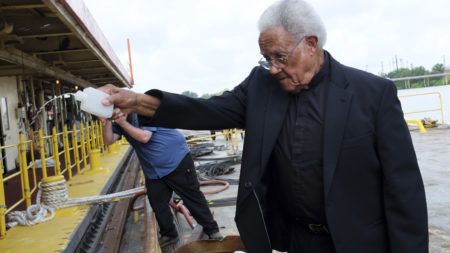 BAY ST. LOUIS, Miss. — Fr Malcolm O'Leary, SVD, known for his ministry and Civil Rights activism in his native Mississippi, was laid to rest this month at the community cemetery of the Society of the Divine Word. He died on May 25th at 92 years old.

His Funeral Mass was held June 1st in the chapel of St Augustine Seminary in Bay St. Louis, where O’Leary was educated in an era when other seminaries in the United States refused to admit African Americans such as himself.

"I just fought it wherever I had to," O'Leary told reporters in 2008 of the racism he faced when he first set out to become a priest.

Born to John and Clementine O’Leary in 1930 in Camden, Mississippi, he attended local Black parishes and schools before departing for the seminary in 1947, just a few decades after St Augustine had been founded by the SVDs to ensure African Americans had access to seminary education in the US. O’Leary took first vows in 1953 and was ordained at the seminary in 1961.

His career as a priest included assignments in Louisiana and Texas, but the bulk of his ministry took place in Mississippi, including a well-known stint at St Francis Catholic Church in Yazoo City during the 1960s.

During that period, he invited Dr. Martin Luther King Jr to the city as a stop during the March Against Fear in 1966, and allowed the NAACP to use the St Francis gym for rallies and meetings, according to the Yazoo Herald.

“He was truly a trailblazer, a man ahead of his time,” Joseph Thomas Sr. told the Herald last week, adding that O’Leary also ran for public office as a priest (before a ban on the practice came into force in 1980) and encouraged other African Americans to run as well.

“He was instrumental in helping blacks get jobs and integrate them into stores and other businesses.”

O’Leary was also said to have had an outsize influence on the children at St Francis School, ensuring the children of Yazoo—today one of the poorest cities in the country—had access to college visits, entertainment, and travel experiences they’d have lacked otherwise.

“For that, we are forever grateful,” said former student Cynthia Walker.

During a stint at Holy Ghost Catholic Church in Opelousas, Louisiana near the turn of the century, O’Leary was also ahead of his time—being instrumental in the banning of certain texts at the parish school from Flannery O’Connor, whose low opinion of African Americans has come under scrutiny in recent years. (In his day, O’Leary faced heated criticism for the act in conservative media and literature.)

In his later years, O’Leary also became notable for his support of a purported Marian apparition to Claude Newman, an African-American in Mississippi who converted to Catholicism before his execution for murder in 1944. The miracle is said to have led to the construction of Immaculate Conception Catholic Church, a Black parish in Clarksdale, Mississippi.

O’Leary heard the story from Fr Robert O’Leary, SVD—no relation—who ministered to Newman in prison and claimed to faithfully reproduce his testimony before his own death in 1984. Fr Malcolm was featured in a retelling of the story in national Catholic media as recently as 2016,

O’Leary retired from active ministry in 2019 and was most recently a resident of the Woodland Village Nursing Home in Diamondhead, Mississippi.