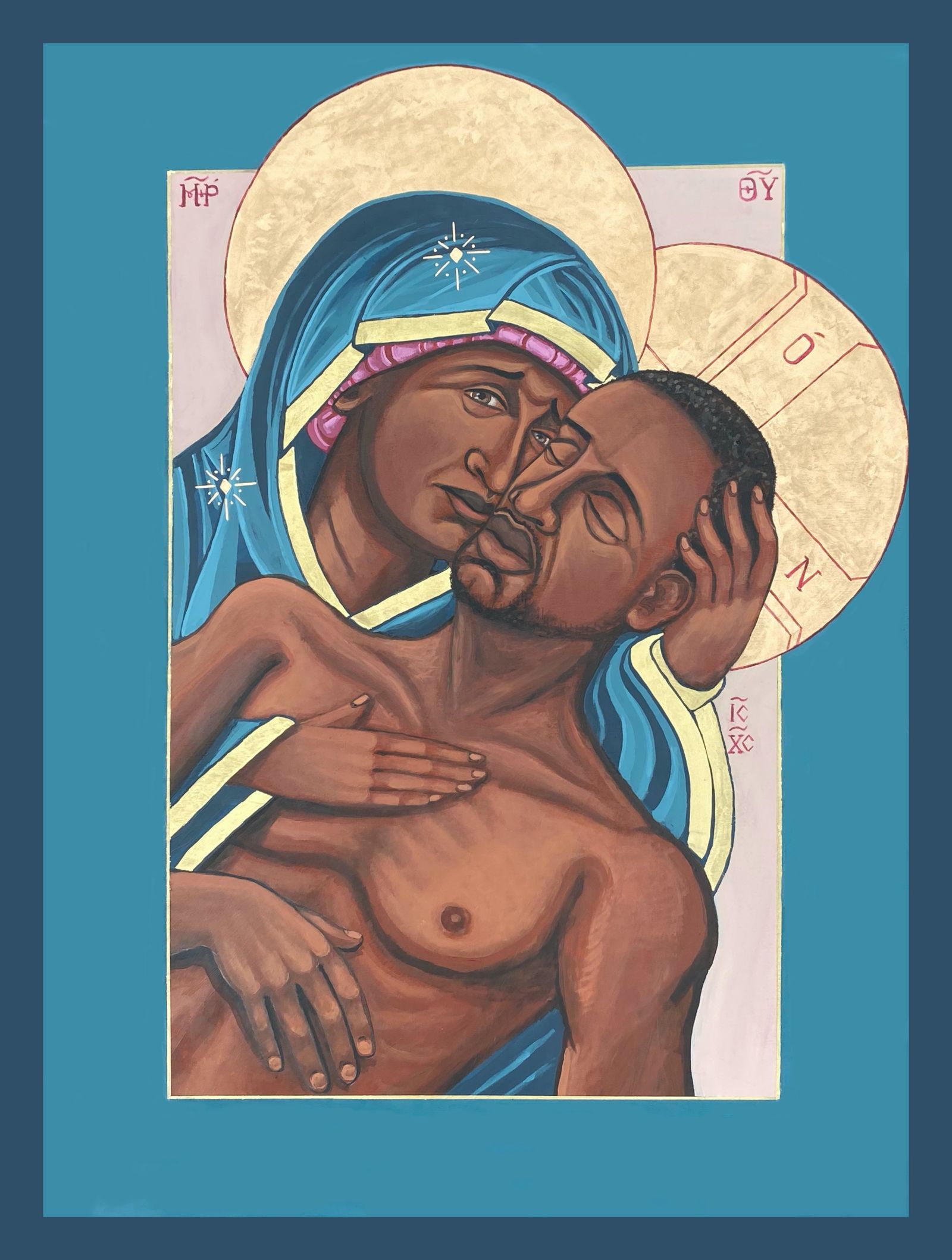 The controversy may have also caused the university to scrub evidence of its original installation, which had been extant in photos, text, and video on its website until at least September.

The image was originally hung in CUA’s Columbus School of Law in February without much fanfare, but the added media attention in November brought a much different reaction.

“Some critics called the image blasphemous because they saw it as deifying or canonizing George Floyd,” CUA President John Garvey said in a letter concerning the theft, adding that the university received a “substantial number” of messages along those lines (presumably before the theft).

“Some comments that we received were thoughtful and reasonable. Some were offensive and racist.”

The official university statement, also before the theft, was shared with members of the press who had reached out and later included by Garvey in his letter.

Therein, he criticized those opposing the image but tacitly endorsed their reasoning.

“There are those who would like to see George Floyd as the male figure in the icon. That is not how we read it,” it says.

“The image represents to our community a good-faith attempt to include religious imagery on campus that reflects the universality of the Catholic Church.”

Who exactly “our community” refers to is perhaps up for interpretation, however, as countless students and alumni have spoken out in support of the image as it was intended by its creator.

The icon, entitled Mama and created by NYC-based (and White) Episcopalian artist Kelly Latimore in June 2020, went viral among supporters—and critics—of the ongoing racial reckoning and protest movement following Floyd’s murder that May.

It can now be found in galleries and sacred spaces around the country, not unlike his other works, which range from reworkings of conventional iconography to depictions of non-Catholic holy figures, activists, and martyrs.

Mama’s traditional Eastern Christian style and markings are combined with a Black-skinned Mary and Jesus—the latter bearing an obvious resemblance to Floyd himself, whose last words were “Mama” while being murdered by then-officer Derek Chauvin.

“I believe Christ is in that image, just as much as it would be in a ‘normal’ Pietà—the European version of Christ,” Latimore told Religion News Service last weekend, adding that he has received an increase in death threats due to the new online furor involving CUA.

“In Matthew’s Gospel, Jesus asks us to find him in all people, especially those who suffer as George Floyd did.”

Rejecting Latimore’s similar descriptions of the icon in the past, Garvey noted that much of this week’s criticism came from “people unconnected to the university”.

Even so, one of the articles that kicked off the controversy was penned by CUA alum Mary Margaret Olohan and contained profoundly negative comments from several CUA students. In addition, a removal petition now containing over 4,600 signatures was created by the university’s student chapter of the Young America’s Foundation.

In contrast, CUA’s chapter of the Young Democratic Socialists of America released a statement in support of the icon shortly after Garvey’s email was sent out, citing Scripture and expressing dismay at the ongoing controversy.

“It is disappointing that this painting has become yet another part of the ‘culture wars’. All humanity is created in the image of God, including and especially George Floyd,” it reads.

“To claim that this image is sacrilege is to deny the image of God.”

She honed in on his either-or description of its depiction of Jesus, and whether the theft is being escalated appropriately.

“Since the icon was at a chapel entrance, why do you call the theft mere "bullying"? Why not call it what it is—[sacrilege]?” she asked.

"Is the theft being investigated as a possible hate crime? (It should be.)"

An identical (though smaller) image of the icon has been put up in the place of the stolen one and, according to Garvey, the university has no plans to take it down.

“It has been the university’s policy, throughout my time as president, not to cancel speakers or prevent speech by members of the community… Our ‘no cancellation’ policy does not apply only to the administration,” he said.

“We hope to continue to build on campus a culture that engages in thoughtful dialogue and debate, not the sort of bully tactics epitomized by this theft.”

There does appear to have been some capitulation, however, as the caption for the replacement image contains no reference to George Floyd, unlike the original.

Also of note is that the university’s new racial equity initiative on campus, the Sister Thea Bowman Committee, released its report on November 16th, which was cited in conservative media amidst the reports on the Mama icon at CUA.

Prof. Regina Jefferson, who teaches in the School of Law and is one of the university's few Black faculty members, heads the committee and participated in the unveiling ceremony for the now-stolen icon, which occurred during Black History Month.

The ceremony, at the law school's Mary, Mirror of Justice Chapel, was feted in an article posted in early March on the CUA website, including a photo of the icon, video of the ceremony, and a prayer:

"May Mary, the mirror of justice, hear the cry of all who have known the sorrow of losing a loved one to violence and injustice."

By November 22nd, however—the same day national media reports broke on the icon's existence—the article was reduced to a fraction of its former content, omitting the picture and prayer. The video, which had been posted to YouTube, appears to have also been deleted.

The school was unable to be reached concerning this matter.

A campus police officer now guards the replacement icon, but no security camera footage of the theft has been released or commented on as of yet.

Garvey has said, however, that campus police are actively investigating the theft. It is not clear whether DC’s Metropolitan Police Department is also involved.