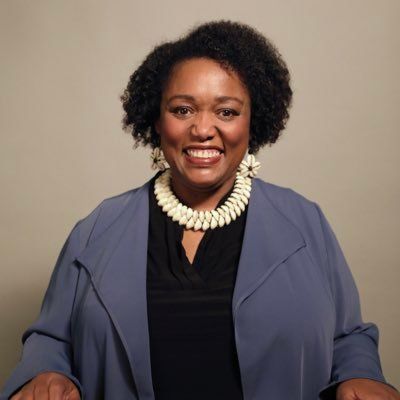 All things Gloria Purvis: an interview on faith, Catholic media, surviving 2020, and her new podcast

Gloria Purvis is back.

After a whirlwind end to an already challenging year in 2020, one of US Catholicism’s most recognizable faces was left reeling from an unceremonious exit out of US Catholicism’s biggest media conglomerate. Now, after 5 months away from the airwaves—with one brief exception—the Gloria Purvis Podcast has arrived on America Media, the Jesuits’ publishing platform.

I sat down with Gloria this week to chat about the new show, her background, and how she got into the wild world of Catholic media. (Hint: it wasn’t intentional.)

We spoke by telephone, and the conversation began with a fact that might be news to many: Gloria had a very successful career in finance before entering the media space, having graduated from the Ivy League’s Cornell University. Even then, though, she was active in Catholic ministry.

“I did a lot of advocacy,” Purvis said.

“Outside of abortion clinics, speaking with Black women about options and opportunities and trying to get them put together with resources that they needed to support having babies. Putting them in touch with places for housing, materials, well all those kinds of things, right?”

She spent her personal time growing in her faith and speaking about it when opportunities started presenting themselves. She also worked with people suffering from HIV and AIDS.

It wasn’t until a producer at EWTN saw Gloria speaking at a rally that her second career came to fruition. Soon, the company reached out to her to do a radio show: “Morning Glory”.

“Some years before that, I was on EWTN in Birmingham; I was on one of their shows for teens that ended up getting pulled because of a scandal with the priest,” she recalled.

“God puts things together when you’re faithful to him and not looking for certain things. Sometimes He’s like: ‘I’m going to use you.’ ”

While God has used Gloria tremendously to help deepen people’s faith and educate them through her time on the radio, as a speaker at various events, and on social media, Gloria says being in front of a microphone or a camera is not important to her.

“Everything that was important to me was to grow in my relationship with God and be faithful to Him,” she said.

“I think it's very dangerous actually to be looking at things like ‘Oh, I want to be a Catholic celebrity’ and all this stuff. [First,] try to develop your own interior prayer life, develop a relationship with God, and understand the teachings of the Church.”

Well-known as a pro-life advocate, in 2020 Purvis also became one of the prominent Catholic voices speaking out against racism. As many now know, though her witness was praised in the Black Catholic community, she also received criticism and complaints from Catholics.

I asked her about when Morning Glory was first taken off the air at Guadalupe Radio Network and then when it was not renewed by EWTN. She says her initial reaction was “Why?” but instead of allowing herself to feel “victimized,” she simply turned to God and what the Lord wants her to do next.

And, she admitted, the early recording schedule didn’t suit her that well anyway. She was ready for change.

That change has come in the form of her new show with America Media, and the first episode dropped on the one-year anniversary of George Floyd’s murder. Her first guest was Fr Erich Rutten, a White priest who pastors a historically Black parish in St. Paul, Minnesota: St. Peter Claver Catholic Church. Their conversation covers how Rutten’s work in a predominantly Black community helped him gain a new perspective, and how the Church can move forward as an institution.

“We need to understand the Church’s teaching on the human person and how that applies in the area of racial justice,” Purvis noted.

“People mistakenly think ‘Oh, if we could just get enough votes to make this illegal, then we build a culture of life.’, and that's woefully insufficient.”

Since priests have tremendous influence over their parishes, Gloria also believes that seminarians need to be sent to Black neighborhoods and have an experience like Rutten’s. She said that if those discerning the priesthood had an opportunity to live with and learn the culture of African-Americans, it would greatly influence them and open their eyes to the realities Black people face today. In turn, she feels there wouldn’t be the same type of racism and ignorance some priests perpetuate from their positions of power.

Tackling things from another angle, in her second episode she had the Black Catholic priest Fr Bruce Wilkinson on to discuss the racism he faced at an all-White seminary in the 1970s. He relayed his experience of having an unknown person leave a burning cross on his desk, and eventually being forced to leave because he was an outspoken African-American.

“I think it's helpful that we're now coming to terms with a lot of the history of things that have happened in the United States to Black people,” she said, “to help people understand that systemic racism is a real thing; it's a structure of sin.”

Gloria decried how over the past several years, ministry offices for Black Catholics have had their budgets greatly reduced or eliminated, and are often forgone altogether in an attempt to meet the needs of all ‘people of color’. (Though she didn’t mention it specifically, the latter scenario has happened in her own diocese of Washington, D.C.—which once had a thriving, independent Black office.)

Though she believes diversity outreach is needed, the burden is often too much for one person to have to bear when it is no longer focused on African-Americans and instead encompasses all ethnicities. She believes we need to invest in the Black Catholic community and those that support them.

I mentioned to her a recent U.S. Catholic article written by Fr Bryan Massingale that stated, “only 54% of Black adults who were raised Catholic continue to identify as Catholic.” I asked if she thinks the Church prioritizes the evangelization of the Black community, to which she responded: “In theory.”

I pressed the point: what does the Church have to do to retain Black Catholics?

Purvis says that, in some ways, the Church’s outreach and embrace of other immigrant communities takes less work because there does not need to be the same reckoning with structures of racism that have built barriers between the Catholic Church and the Black community. However, she argues that an attempt must still be made.

However, she believes the Catholic educational experience today often lacks the traditions and faith practices that would make students want to join the faith. Other than a “crucifix on the wall”—her own words—Catholic schools are often indistinguishable from secular schools.

Looking back on the year of 2020—complete with churches closed due to COVID, a racial reckoning, and civil upheaval—I asked Purvis what spiritual practices or devotions she relied upon most during this challenging period.

A Third Order Carmelite, she said praying the Liturgy of the Hours daily—morning, evening, and night prayers—helped to ground her in her faith. She also leaned on the witness of St. Theresa of Avila, who famously said: “Let nothing perturb you, nothing frighten you. All things pass. God does not change. Patience achieves everything."

During the uncertainty faced in light of the pandemic, and the restrictions put in place to stop the spread of COVID-19, Purvis says she also thought often about the Martyrs of Compiègne, the 16 Carmelites (Blessed Teresa of St Augustine and Companions) who were executed in 1794 during the French Revolution—a time when religious orders were outlawed.

When Gloria thought of those who gave up their very lives for their faith, it helped her draw strength from God and trust in his providence. She believes that the pandemic was (and is) a time in which Catholics could draw closer to God, show their love of neighbor by adhering to mask mandates and other public health orders, and even embrace a level of poverty and sacrifice.

One other question remained pressing. BCM itself was created by a group of lay Black Catholics, including myself, who wanted to fill the void of Black representation in Catholic media. Gloria herself is one of the few exceptions to the rule. I had to ask: in what other ways can Black Catholics become involved in Catholic media?

She encouraged people to first deepen their faith and relationship with God and their diocesan parishes, and then share that faith with others through the available channels, like creating blogs or posting on social media platforms like YouTube, or even starting a Facebook group. (I can confirm this is solid advice!)

As our time together ended, Gloria closed by imparting the message that Black Catholics are loved and cherished by God, and the Catholic Church belongs to us just as much as anyone else. As such, she says her podcast will continue to explore the many facets of living the Catholic faith via a diverse lineup of guests.

You definitely need to check it out and subscribe.