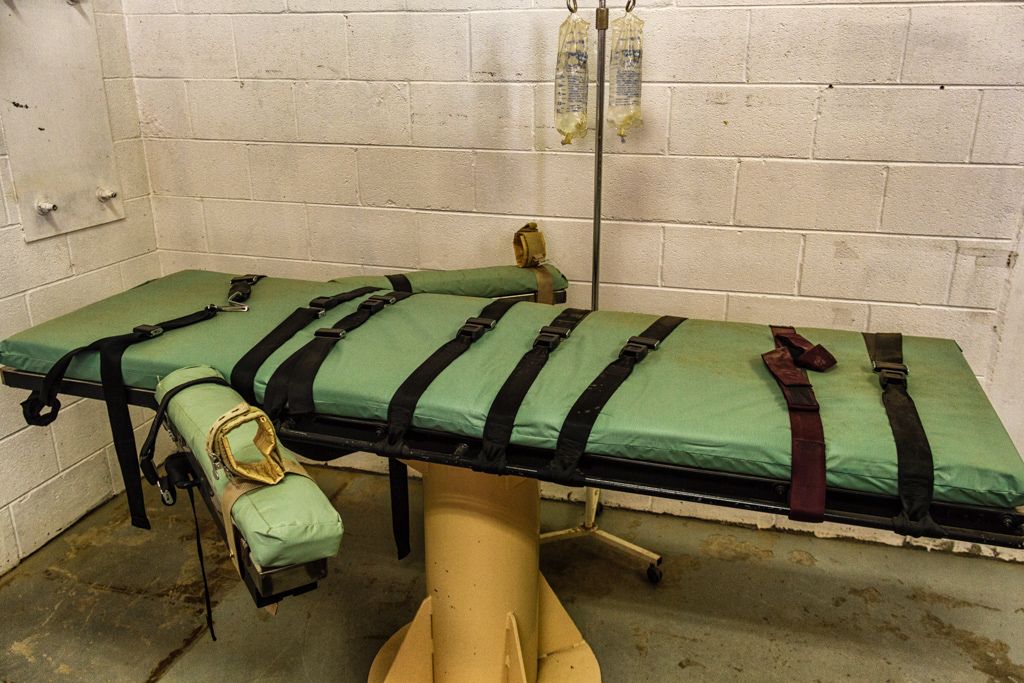 This year has damaged the notion of fraternal compassion, with the federal death penalty being reinstated in July after a 17-year moratorium. The Trump Administration, with the help of not a few Catholic judiciary officials, intends to execute two more men this week.

If these two executions are carried out, there will have been a total of ten federal executions this year-- the highest in a single year since 1896.

January is also set to start off with three federal executions in that month alone.

The two men, on whom our prayers rest this week for their conversion amid their impending execution, are Brandon Bernard and Alfred Burgeois. Brandon Bernard is set to be executed today, Dec. 10—International Human Rights Day—and Alfred Bourgeois tomorrow Friday, Dec. 11.

Bernard is convicted of involvement with a double murder and robbery in Texas.

Bernard’s defense made the case that the prosecution selectively withheld an expert witness who would have shown Bernard’s ranking within his gang, which ultimately would have excluded him from a “hit” of this intensity.

On December 8th, Judge James Sweeney of the U.S. District Court of the Southern District of Indiana denied the request to halt the execution. Sweeney allegedly came to this conclusion on the grounds that the contribution from the witness would not have added compelling evidence to challenge the capital conviction.

Bernard, now forty years old, was eighteen at the time of the deaths of Todd and Stacie Bagley in 1999.

Bernard certainly was not the mastermind of the operation, however, the level of his involvement in these two deaths remains speculative. His accomplice, Christopher Vialva who was executed earlier this year, is thought to have committed the double murder single-handedly.

All we know concretely from the court documents presented is that the car used to transport the Bagley’s belonged to Bernard.

ATM withdrawals shortly after the crime was committed were also linked to Bernard, showing the purchase of lighter fluid—which was later used to hide evidence, including burning the getaway vehicle and corpses.

Bernard, who was initially said to have been merely the getaway driver in an otherwise nonlethal robbery, ended up being a component in larger fatal gang activity.

These atrocious crimes cannot be overlooked. The Bagley’s lost their lives. Their families mourned two souls that will not return to this Earth.

It is appropriate to say his freedom ought to be forfeited for his involvement in this crime, but his life is something we—the state, overwhelming constituents of our federal government—cannot take.

Let us examine the reasons given by many individuals on the case as to why Bernard’s death sentence should be commuted to life in prison:

First is the assertion of the defense that Bernard did not intend murder but was primarily volitional in his role as a “getaway driver”.

Second is a strong commendation from the former warden of the Federal Bureau of Prisons on behalf of Bernard’s twenty years of good conduct in prison.

Third is the fact that, though the withholding of a witness was not compelling to the judge to halt the execution, there is still substantial reason to believe it would have affected the jury’s decision. The witness could have provided additional testimony which could have contradicted the prosecution or affirmed the defense.

Last is the jury itself. Five of the nine jurors regret the original verdict of death and now believe his sentence should be commuted to life in prison.

Various moving parts of this trial have asserted Bernard’s path to reconciliation as a forty-year-old man, remorseful of his involvement as an eighteen-year-old (making him one of the youngest people in U.S. history to receive the death penalty).

Angela Moore, a former prosecutor on this case has since added that science now shows critical portions of the brain are not developed until the mid-twenties. She also adds this case of adolescence similarly applies to Bernard who has “maintained rich relationships with his loved ones and worked to find meaning in his life by helping at-risk teenagers avoid a criminal path.”

Mercy rings out in the testimony of all those involved with the case. People must be given the opportunity to choose mercy.

Alfred Bourgeois was sentenced to death in 2004 after being found guilty of murdering his two-and-a-half-year-old daughter.

Bourgeois’ execution has been stayed twice already, under compelling evidence that he has an intellectual disability. In 2002 the Supreme Court ruled in Atkins v. Virginia, that the execution of the intellectually disabled violates constitutional protections against cruel and unusual punishment.

This week Bourgeois’s counsel filed for clemency from President Trump, after failed attempts for lower court hearings on his disability status.

Another infraction causing unrest regarding Bourgeois’s execution is the rapidity with which it is being carried out. The U.S.Federal Death Penalty Act requires defendants to receive a ninety-day notice of their execution. Bourgeois received a twenty-one-day notice. Facts of the case aside, this is procedural negligence.

Both cases are appealing to higher courts in a continued search of justice for these two men. What are we to do from the outside?

We continue to heed the call given by Pope Francis this year in his papal encyclical Fratelli Tutti:

“The death penalty is inadmissible, and Catholics should work for its abolition.”

Pope Francis makes a necessary distinction in a doctrinal change that has been brewing since St. Pope John Paul II’s Evangelii Gaudium.

The death penalty is inadmissible, which takes the wisdom of centuries of Church Fathers who were in support of capital punishment and places it in the context of a criminal justice system that is excessively punitive, biased, and blatantly unconcerned with any Christian notions of human dignity.

Unfortunately, these two pending executions are effective examples of procedural discrepancies that cultivate punishment over reform, mercy, and reconciliation.

We must remain prayerful and vigilant in restoring a culture of life to all spheres of civic life—even as it pertains to the convicted and incarcerated. Catholic Mobilizing Network will be holding prayer vigils for upcoming executions.

The second week of Advent provides for Catholics a Solemnity to reflect on the Immaculate Conception of the Blessed Virgin Mary. Having celebrated this solemnity earlier in the week, we the faithful are reminded that our Blessed Mother’s sinlessness does not remove her from our sinful humanity. Instead, it makes her the closest to us in our fallen nature after our Lord Jesus Christ.

No sin, selfishness, or pride stands in between us as sinners and her love for us as our advocate and mother. May we embody this full-hearted compassion for our neighbors—even those guilty of grave sin.

Isaiah Brickus is a graduate in public policy and African American studies from the University of Maryland at College Park, a Lay Dominican, FOCUS missionary at Temple University, and prison ministry volunteer.