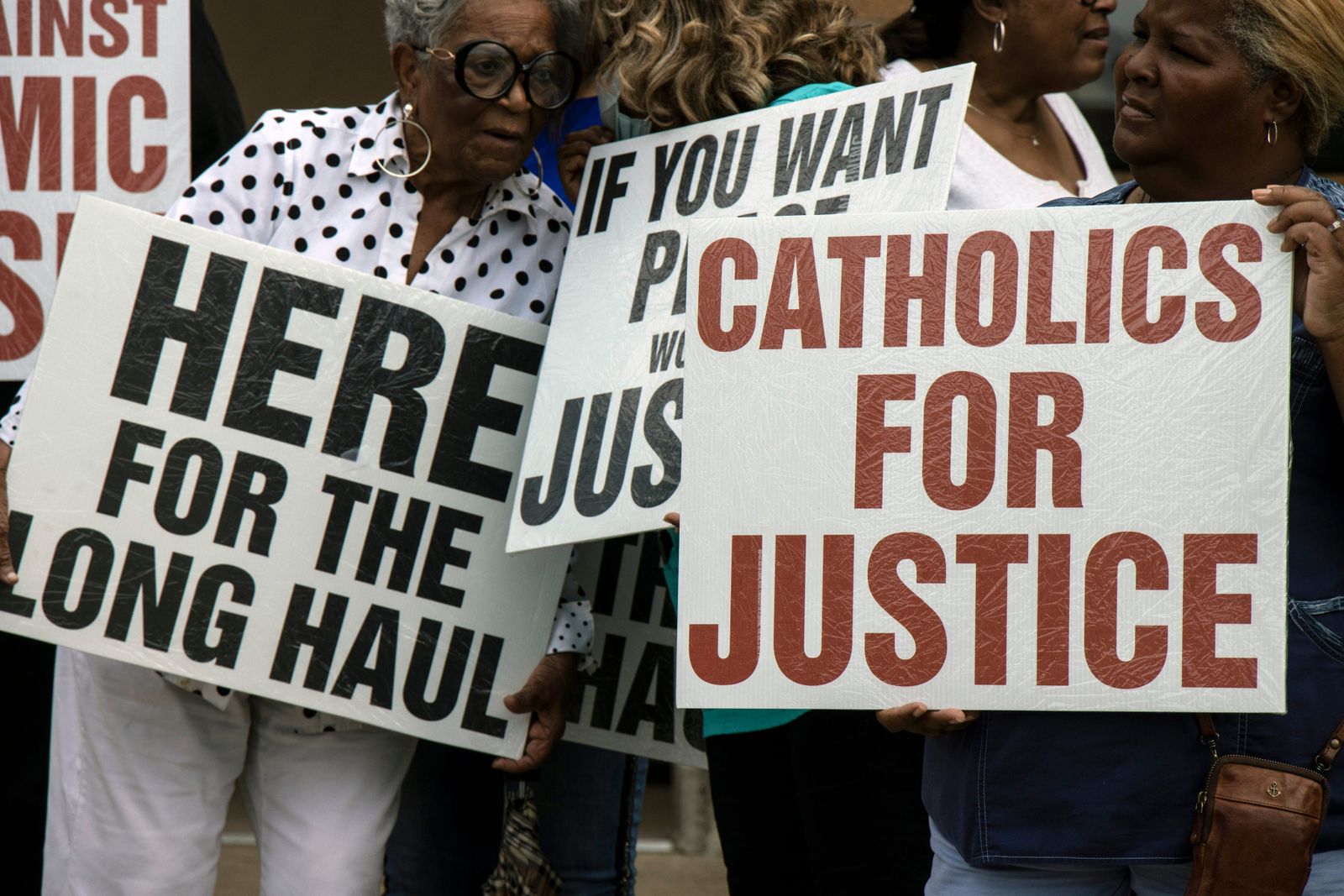 Black Catholics in Louisville continue protests against their pastor

Parishioners from Immaculate Heart of Mary Catholic Church, a Black parish in the West End of Louisville, are protesting their pastor due to alleged financial mismanagement, vindictive leadership, and ethical misconduct, according to parishioners who spoke with BCM last month.

Fr Christopher Rhodes—a Black, ex-military priest ordained in 2012—has been pastor of three Black parishes (St Augustine, Immaculate Heart, and Christ the King) since May 2019, after which problems began almost immediately.

“He had a town hall with all three parishes, where he told us he would not be attending meetings, including parish leadership meetings,” Ashia Powell told BCM.

A similar scenario played out simultaneously at St Augustine, where the finance chair is said to have been removed after discrepancies were found.

Valerie Johnson, former chair of the parish leadership team, says the audit found that Rhodes indeed exceeded budget stipulations, spending about $24,000 in total (and taking the parish from a surplus into a deficit, according to Powell).

The finance council continued to meet, without a leader, and continued communications with the chancery.

Meanwhile, Rhodes allegedly began targeting parishioners from the pulpit, at one point approaching a female member (who had spoken out during Mass) in a manner that made some present fear they needed to restrain him.

“Our children were like ‘Is he going to hit Ms. Alice?’,” Johnson said.

“It was just very inappropriate.”

“He wrote a formal letter, and got up in front of the parishioners and said he was putting in his notice to be removed,” said DeShonda Lockhart, chair of evangelization at Immaculate Heart. Johnson adds that he said he was “exploring other options”.

(He would later deny making such statements, though parishioners still have the letter.)

Soon, the replacement finance chair quit “in frustration” as Rhodes refused to comply with established standards for accounting and accountability.

Eventually, Johnson’s own protestations (to Rhodes and to the archdiocese), alongside that of other exasperated members of parish leadership, resulted in her being replaced on the finance council by Rhodes’ self-appointed personal liaison in February 2020.

At that point, the three parishes went to local media to publicize their concerns in the hope of a resolution. In December of that year, a delegation traveled to the chancery to meet with Archbishop Joseph Kurtz unannounced.

“He ‘gave us dignity’ by allowing us to meet with him for about 10 minutes,” Powell said, adding that he refused both a request for a formal appointment and for “mediation” with Rhodes.

Soon after, the replacement chair of the parish leadership team was also let go, and Rhodes began—on Facebook—to publicly accuse “several” Immaculate Heart parishioners of wanting him gone, and requested letters of support from his social media onlookers (including friends, admirers, and former parishioners).

Since then, Rhodes has been re-posting letters, quotes, comments, and other votes of confidence on his public profile, including what he termed as support from the archbishop himself—who, during a visit to Immaculate Heart on Mother’s Day, again refused to meet with parishioners.

Immaculate Heart began public protests on June 7th, beginning at the pastoral center of the archdiocese. The event was covered by local media, but the archdiocese refused to offer comment.

They did, however, release a statement in defense of Rhodes, citing the financial audit, his stated commitment to his parishes, and a “vitality plan” Rhodes has instituted at Immaculate Heart.

(The archdiocese does not appear to have publicly acknowledged his former resignation announcement.)

“There's no ministry that can really take place right now without leadership in those ministries,” Johnson said.

“There is no religious education. There is no formation development… we are still doing some outreach, but it's limited to the extent that you have people that want to continue to work with [him].”

The day after the first protest, parishioners continued at Immaculate Heart itself, where Rhodes lives.

“He came to the door with his dog,” said Marvina Lewis, an elderly parishioner who joined the protest and at one point sat on the steps of the rectory to rest.

“He said to me, ‘You have 10 minutes to get off of my property or I’m calling the police.’”

Rhodes did in fact dial 911, but the officers quickly left after learning the alleged trespassers were parishioners of the parish.

Previously, Lewis herself had joined Immaculate Heart’s letter-writing campaign with her own letter to the apostolic nuncio Archbishop Christophe Pierre, the Vatican’s delegate to the United States. She also copied Pope Francis.

Much like with Rhodes at the rectory, the door was shut in her face. Pierre merely redirected her back to the local ordinary.

“I would say it was copy and paste, even though you if you read between the lines, he did show some sympathy for us,” Lewis said.

“But he told us we really needed to go back to Archbishop Kurtz.”

Meanwhile, the parishioners affected by Rhodes’ actions say attendance at Sunday Mass is affected by whether Rhodes is the celebrant.

“It is way up and way down,” Johnson said.

“Generally down when he’s there.”

Johnson also says Rhodes has threatened the parish’s Knights of Peter Claver council with expulsion if they don’t support him, and that he told another parishioner he’d call the FBI on her if she was the author of an allegedly threatening letter he’d received in the mail.

A group of parishioners also got word last month that Rhodes was planning to have police at Mass on June 20th—Father’s Day—“because he feared for his life,” according to Powell. This did not materialize, but he has allegedly done so at a previous parish.

Amid weekly livestreamed protests (attended by Catholics, White and Black, from parishes around the city), Immaculate Heart parishioners attempted to schedule a meeting with the archbishop that month, but were given a three-day turnaround which they could not manage.

The archbishop’s secretary then suggested they meet on August 3rd—with a maximum delegation of three parishioners instead of the proposed six.

(Johnson calls this stipulation a “control thing”, but also a delay tactic—as Kurtz is due to submit his age-mandated retirement notice to the Vatican just two weeks later, on August 18th.)

“The Archbishop systematically does not do for African Americans what he does for other people of color,” Powell said—a point echoed by Johnson, who feels the issue at Immaculate Heart is part of a larger narrative.

“For years, African Americans have been used, knowingly and unknowingly, to further a racist agenda. With our particular pastor, he just has no agenda,” she said.

“His agenda seems to be himself.” Where to find a Black Catholic History Month event (2021 edition)