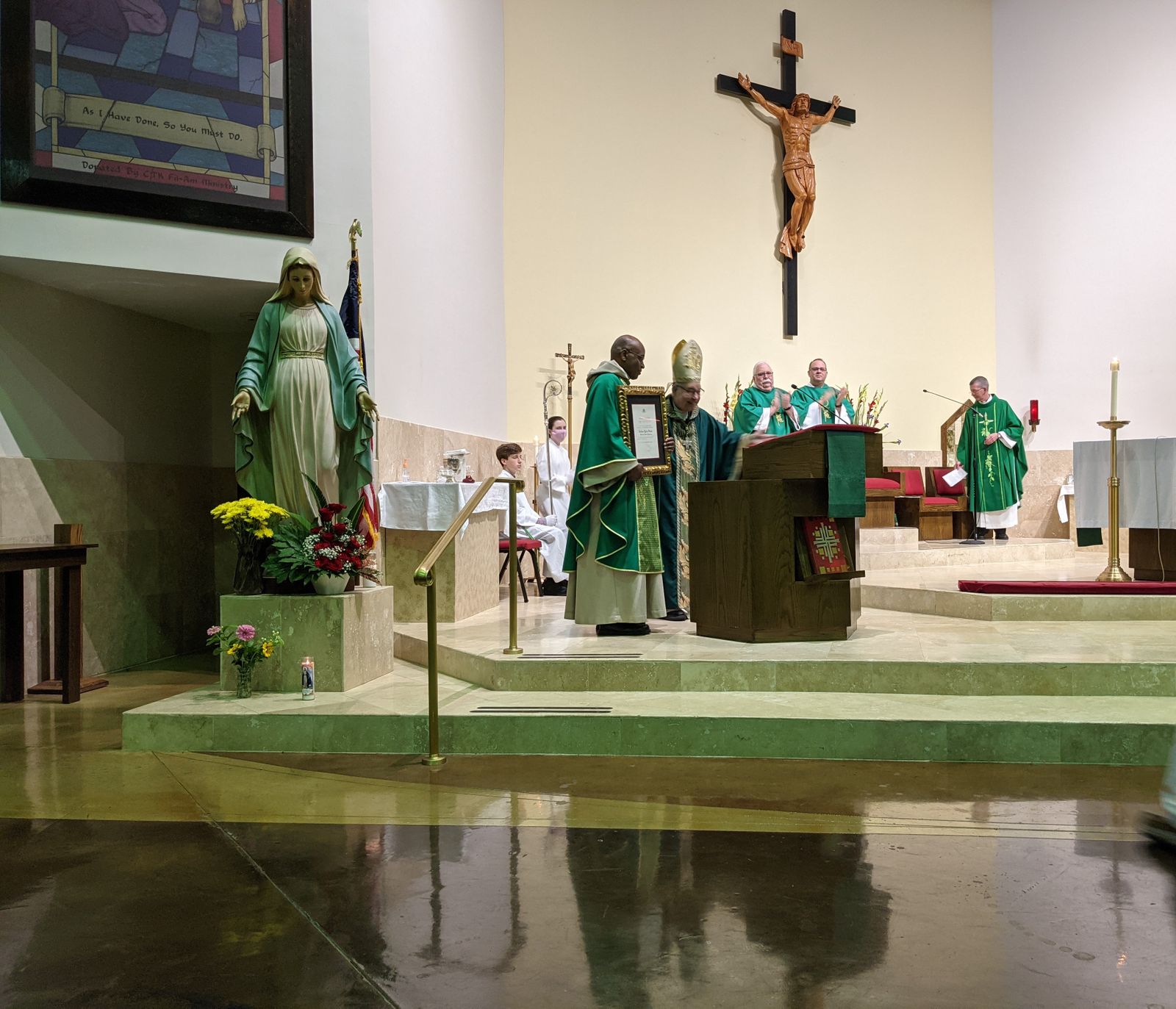 'The first of many': Msgr James Boddie Jr., a prophet honored in his hometown

It was a packed house for the Sunday morning Mass at Christ the King in Jacksonville, and for good reason: the parish pastor, James Boddie, Jr.—an African-American—is the nation’s newest monsignor.

Boddie’s bishop (who submitted his name for consideration), Felipe Estévez of St Augustine, presided, alongside the parish’s other priests, the other recently-named monsignor in the diocese, and multiple diocesan officials.

Catholics from around town and out of town also made the trip to see Msgr Boddie honored amongst his peers, and amidst a cross-section of the nation’s ethnic demographics.

In addition to English ordinaries, the choir sang the responsorial psalm in Vietnamese, and a Latinx trio sang the reflection hymn in Spanish—a reflection of the diversity of the parish, which Boddie made sure to point out to me after Mass.

“Those are all our choirs,” he said.

CTK is predominantly non-Black, but the crowd on Sunday featured parishioners from Boddie’s former assignments—perhaps chief among them his childhood parish of St Pius V, established in 1919 after African Americans became fed up with racism at Immaculate Conception Church downtown (now a basilica).

“Their children could not serve on the altar,” Boddie said, “and they had to sit in the back of the church.”

Soon after, the Josephites were called in—as they often were in those days—to serve the newly established Black parish.

Boddie, raised by a pair of Catholic converts, graduated from the parish school before attending Bishop Kenny High and matriculating to minor seminary in Miami in 1970. He was the first-ever African American to enter seminary in Florida, and in a time of great racial strife in the nation.

“My dad came down with me [to Miami],” Boddie said, noting that he was the oldest of his parents’ children.

“He wanted to check it out.”

Boddie says he had a pleasant experience during that time, though he did note one fellow seminarian who “didn’t like African Americans”.

“He moved out,” Boddie recalled, noting that the experience did “bother” him, even if not much and not for long.

“I think they asked him to leave.”

In 1978, Boddie became the first Black Floridian to graduate from seminary and be ordained.  The ceremony took place at St Pius V, and one of the priests present to lay hands was none other than Bishop Estévez.

“He told me that it was far from his mind that this day, he would be my bishop,” Boddie noted to me at the reception after Sunday’s Mass.

Perhaps far from Boddie’s mind as well was the idea that he would become pastor of his own childhood parish, which indeed occurred following the Josephites’ departure in 1993.

It was in some ways quite the change of course from his first pastorate, of Sacred Heart in Green Cove Springs (about 30 miles south of Jacksonville).

It was “in the country”, in Boddie’s own words, and with that setting came the racial peculiarities of the First Coast—even in the 1980s.

“One Saturday, the Klu Klux Klan had a march,” he told me rather matter-of-factly.

“The sheriff came straight to the rectory, and said, ‘Father, don’t worry. We’ll take care of it.’”

And sure enough, they did. Boddie says he never did see the Klan that day. (Whether they actually marched is another matter entirely.)

One has to wonder, of course, to what degree this racial climate played a part in the dearth of vocations in the state up to that point—and since. Asked how many Black Floridians have reached ordination in 40 some-odd years since his own, Boddie offered two (words).

(That said, two Black North Americans were ordained in Florida this Spring, including an African American.)

Bishop Estévez, in a short conversation with me at the reception, expressed a keen interest in the concerns and stories of Black Catholics. He also had not hesitated even during the Mass to make an explicit call for Black vocations.

“I hope that even though you are the first, you may be the first of many,” he told Boddie from the lectern, occasioning a raucous ovation from the congregation before he presented him the honorary papal plaque.

“May this applause be a prayer of intercession to the Holy Spirit that it may truly happen.” Reflection: 'In The Heights' and Afro-Latino erasure