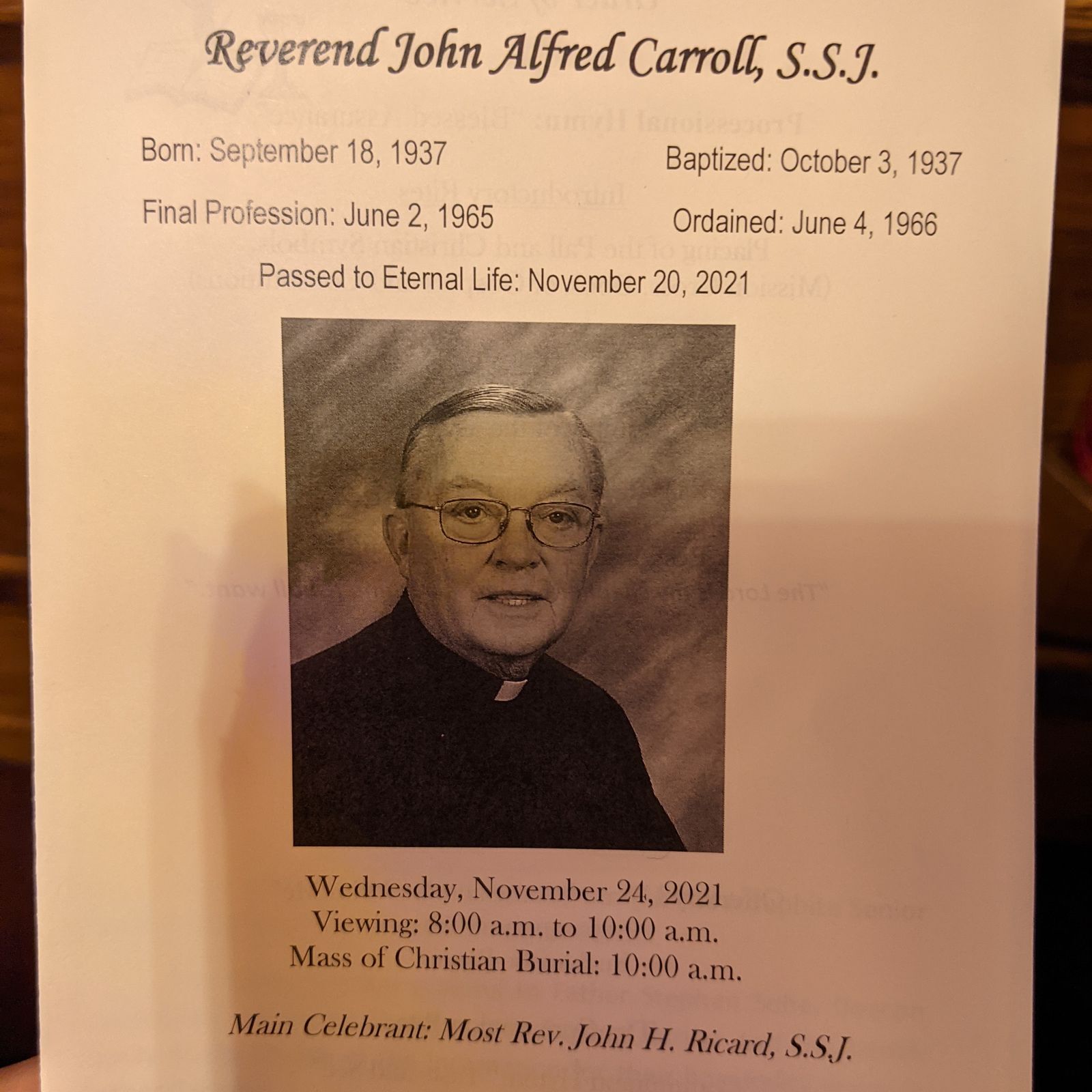 Fr John A. Carroll, SSJ, a longtime member of the Society of St Joseph of the Sacred Heart (the Josephites), passed away suddenly on November 20th at St Joseph’s Seminary in Washington, DC.

He was 84 years old and the second Josephite to pass away this month, following Fr Joseph Doyle, SSJ in New Orleans, who was buried on November 5th.

During Carroll's funeral on Wednesday, Gospel music filled the halls of Incarnation Catholic Church, his last stop before retiring earlier this year.

“He loved being a priest,” said Incarnation’s Dcn Joseph Bell, a close friend of Carroll’s during his 21 years at the parish.

“He loved Incarnation church and its parishioners and he shepherded in a manner that encompassed all.”

Carroll was born in 1937 to Irish Catholic parents in Boston, where he was raised at Gate of Heaven Catholic Church. The parish, despite being diocesan, produced several Josephite priests over the years, with the society drawing many of its vocations from Irish families in its early years.

Ordained in 1966, Carroll would go on to serve all across the Josephite footprint of African-American parishes, including in Beaumont, Texas; Houston; Alexandria, Va.; New Orleans; and Mobile, with multiple stops in DC in-between.

He was also an educator and formator, having taught at the former Epiphany Apostolic College (the Josephites’ minor seminary in Newburgh, N.Y.) and St Vincent de Paul Seminary in Beaumont. He also served as a spiritual director at the major seminary where he resided in his last days.

“He quietly did his work and he gloried in the ordinary things of the ministry,” said Josephite superior general Bishop John Ricard, SSJ, who celebrated the Funeral Mass in DC.

“Every place he went, he was well-loved.”

On the altar at his homegoing were upwards of 15 Black clergy, including several Black deacons alongside other Josephites and the archdiocese’s vicar for clergy, Fr Anthony Lickteig.

Carroll’s grand-niece flew in from Massachusetts for the ceremony, after which his body was flown to Boston for a private family funeral at his childhood parish. He was interred thereafter at Cedar Grove Cemetery in Dorchester Center.

“I was supposed to hang out with Fr Carroll on Monday,” said Fr Stephen Sohe, SSJ, Carroll’s successor at Incarnation, during the service in DC.

“I guess he chose to hang out with Jesus.”