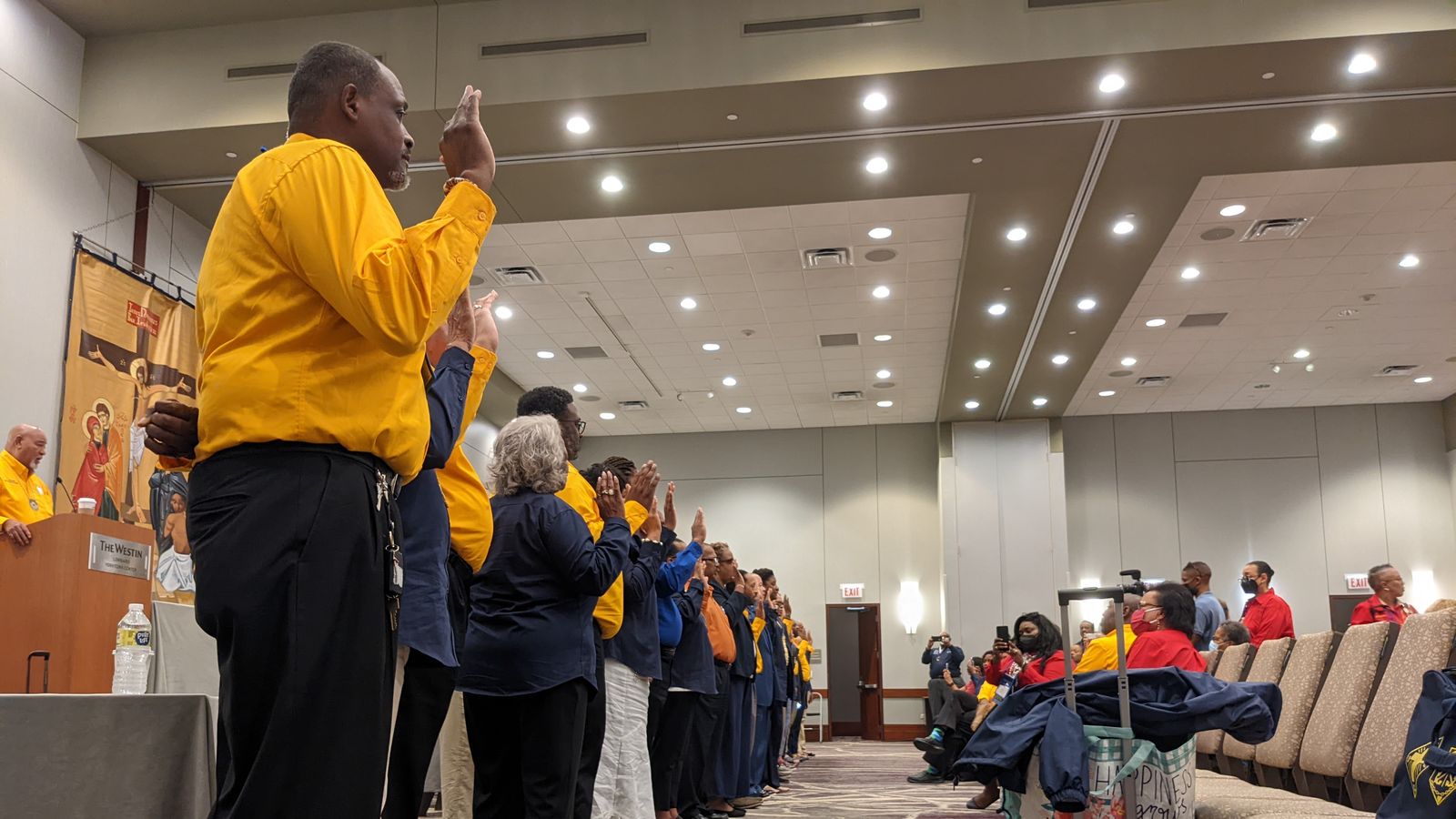 LOMBARD, Ill. — The Knights of Peter Claver and Ladies Auxiliary held their 106th annual national convention this week in Illinois, convening African-American Catholics and allies from around the country to attend to the business of the historic Black fraternal order.

The event returned to in-person status for the first time in 3 years, attracting a crowd of hundreds to the Westin Chicago Lombard to elect officers, fellowship, fundraise, strategize, and present the group’s annual awards.

Outgoing Supreme Knight James K. Ellis, who in that position led the men’s division of the order and served as the larger organization’s CEO, marked the end of his six-year tenure at the helm. He was elected to his last allowed two-year term at the virtual national board meeting in 2020.

Succeeding him is fellow Texan (and Houstonian), Christopher Pichon Sr., who dedicated the win to his late son Christoper II, a former president of Texas’ Junior Knights. Another Houstonian elected to national office was Deputy Supreme Knight Ricky Sassau, who serves in a KPC council based in his native Louisiana.

Also changing hands in the men’s division were the positions of National Advocate and Lay Board Member, which went to William Everette and Athanase Jones, respectively.

Only one opposition candidate was nominated on the Ladies’ side, for the position of National Secretary, with Stephanie Inis winning her bid. The convention was being held just outside of her native Chicago.

Saturday afternoon's awards luncheon for members of the Meritorious Fourth Degree saw the awarding of the order’s highest honor, the Cartagena Award, so named for the Colombian home base of the organization’s patron saint, Peter Claver.

Past Vice Supreme Lady Hilda Wiltz of Louisiana received the award from among the women’s Gracious Ladies division, while the corresponding award for the Sir Knights went to Emile Adams Jr. of Los Angeles—a history-maker said to be the oldest Catholic deacon in the country at 100 years old.

The corresponding award for the Gracious Ladies of the 4th Degree goes to Hilda Broussard Wiltz—who was most certainly present to receive.

"I knew she would want to come up here and dance." pic.twitter.com/igpKgw3OvW

The Saint Peter Claver Foundation, the charitable arm of the Knights and Ladies, hosted their annual Founders' Gala on Saturday night—honoring Doris Barrow in absentia for his service as director of the Newman Center at Texas Southern University and for his faithful membership as a Claver since his youth at Holy Ghost Catholic Church in Opelousas, Louisiana.

Perhaps the highlight of the six-day convention was the two virtual events livestreamed from the grand ballroom, including a public forum on Sunday night sponsored by the order’s social justice committee and the National Convention Mass celebrated by Auxiliary Bishop Joseph Perry of Chicago earlier that same morning—the latter reaching more than 3,500 viewers on YouTube.

The concelebrants were Claver priests from around the country, including Frs Rodney Armstrong, SSJ of Houston; Kevin Fausz, CM of San Antonio; Daniel Green of New Orleans; and Vernon Huguley of Birmingham. Deacons Michael Taylor and Jesse Watley of New Orleans, and Al Anderson Jr. of Alexandria, Virginia also assisted with liturgies throughout the week.

At the public forum, US Representative Danny K. Davis of Illinois joined Fr Michael Pfleger of Chicago’s St Sabina Catholic Church to speak on the issue of gun violence, an issue that hits home for both men. Pfleger’s foster son Jarvis Franklin was killed by stray gunfire in 1998 and Davis’ grandson Javon was shot and killed in 2016.

The Clavers’ subcommittee on Dignity of Black Lives, part of the group sponsoring the event, also produced an official letter to Congress on gun violence, in response to a challenge presented by an attendee during the Q&A.

“The Knights of Peter Clavers and Ladies Auxiliary is calling for federal legislation to ban assault weapons and semi-automatic weapons,” it reads.

“We beseech the leaders of the US Senate and the US House of Representatives to immediately pass legislation that restricts the sale and use of these weapons… gun control is truly and succinctly pro-life.”

An eminently charitable event, the convention also raised nearly $30,000 for scholarships by means of its annual raffle, and the Emerging Leaders young adults committee hosted a breast cancer awareness giveback benefiting chemotherapy patients. Donations were also collected throughout the week for pregnant mothers, and a silent auction in support of the Saint Peter Claver Foundation is ongoing through Friday night.

The order also inaugurated its first-ever Bishop Carmon Fund scholarship for vocations, a $5,000 award this year that went to the Society of St. Joseph of the Sacred Heart, also known as the Josephites. Founded in 1893, the society of priests and brothers serves African Americans and helped found the Knights of Peter Claver in 1909. The scholarship itself is named after the late Auxiliary Bishop Dominic Carmon, SVD of New Orleans, an early Black priest and bishop in the United States.

The Knights and Ladies have also announced the date and location of next year’s convention, due to be held in New Orleans—the city of their headquarters and a Black Catholic mecca—from July 14-19th, 2023.

New KPC members are being accepted year-round, and interested individuals can contact the national office for more information, or register online before being formally initiated and joining a local court or council.

Update (7/22): A previous version of this story included incorrect information on the Founders' Gala and Fourth Degree awards luncheon, both of which occurred on Saturday. The error has been corrected.