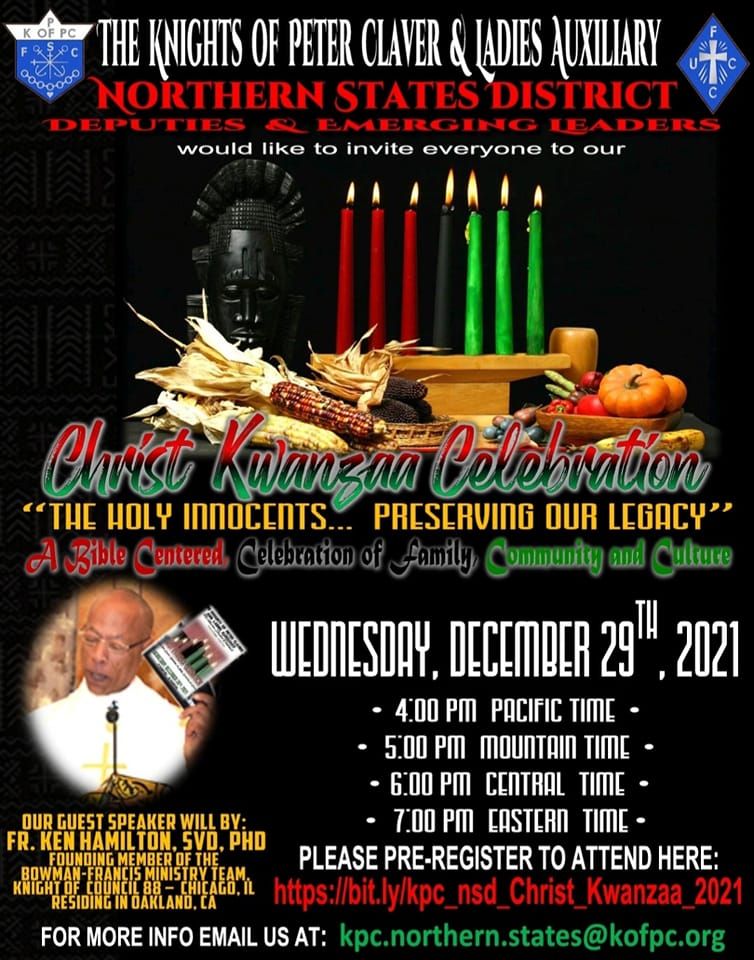 The Knights of Peter Claver and Ladies Auxiliary will host a virtual Christ Kwanzaa Celebration on Wednesday, December 29th at 7pm ET, the fraternal order has announced.

The event, entitled “Holy Innocents… Preserving Our Legacy” will take place halfway through the celebration of Kwanzaa, a 7-day commemoration of Afrocentric values and ethics that begins every year on December 26th, the day after Christmas, and ends on New Year’s Day.

Scheduled to follow the Feast of the Holy Innocents, the KPC gathering is a joint effort between the Northern States District and the National Emerging Leaders, a young adults committee within the fraternal order made up of representatives from each regional district.

“Our Emerging Leaders felt [the feast] needed to be focused on, particularly in light of all that is happening currently in our world,” said Shaniqua Wilson, an NYC-based artist and activist who serves as a KPC area director.

Kwanzaa was founded in 1966 by Dr. Maulana Karenga in response to anti-Black racism and as part of the Black Power and Pan-African movements. Its seven principles include “Umoja” (Unity), “Kujichagulia” (Self-determination), “Ujima” (Collective Work and Responsibility), “Ujamaa” (Cooperative economics), “Nia” (Purpose), “Kuumba” (Creativity), and “Imani” (Faith).

The weeklong holiday has since gone international and remains popular among US Black Catholics.

The KPC celebration will feature as its guest speaker Fr Ken Hamilton, SVD, co-founder of the Bowman-Francis Ministry, a Black Catholic ministry affiliated with his religious order (the Society of the Divine Word) and promoting unity within the African diaspora—particularly in the US.

Wilson notes that the event is meant to itself respond to the ongoing racial reckoning, as well as to the larger narrative of suffering among African Americans due to terrorism and state-sponsored violence.

“It promises to be a powerful evening of intergenerational sharing,” she said.

“Despite the negative events spanning from the killing of Emmett Till to the Ahmaud Arbery killing/trial, we still have much to celebrate in Christ Jesus.”