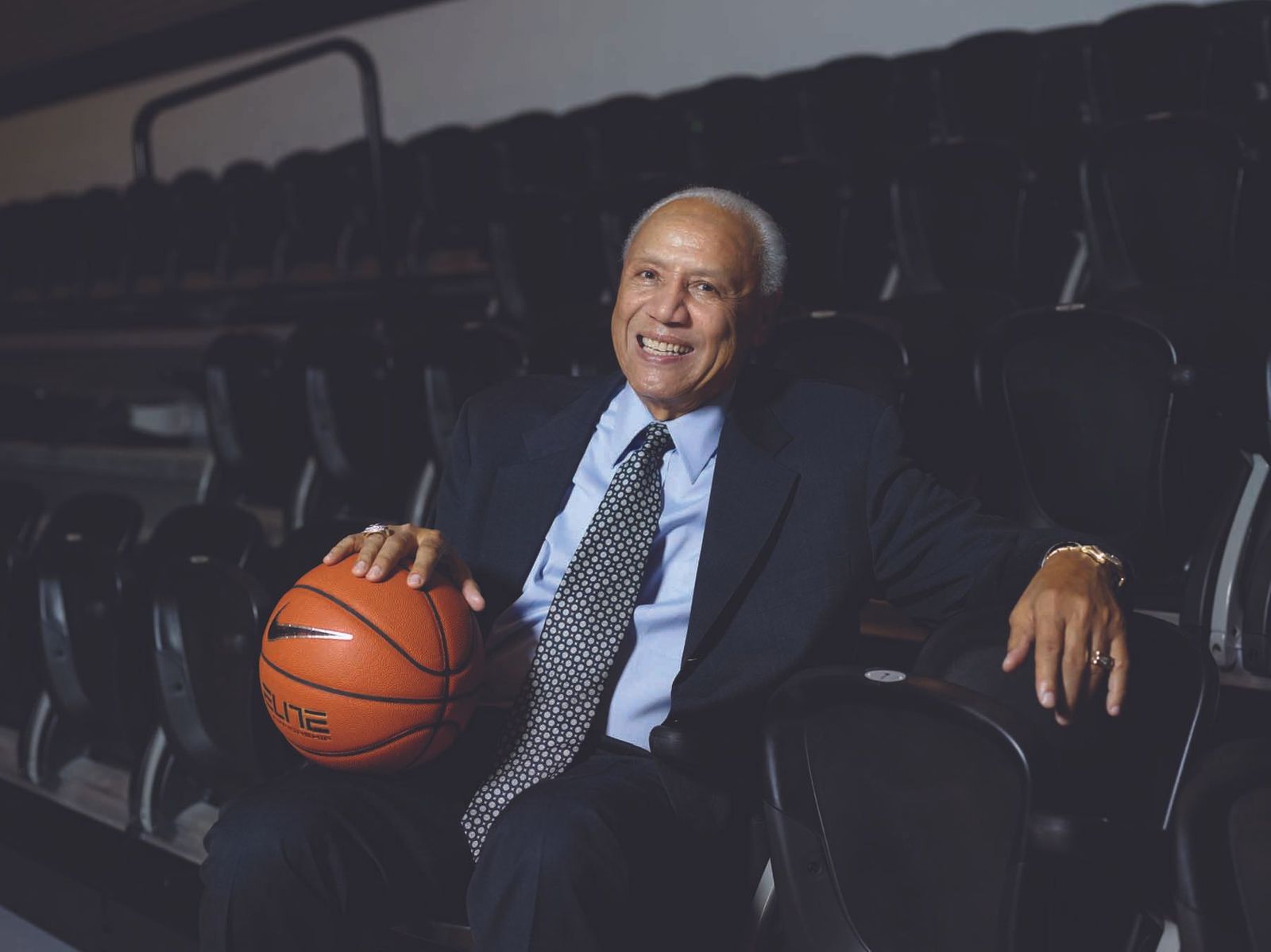 Lenny Wilkens’ legacy extends from the Hudson to Lake Erie to the Mississippi and beyond. But few know that in addition to his devotion to the game of basketball, he has nurtured a lifelong relationship with Jesus by way of his Catholic faith. He recently talked hoops, harm, holiness, and honor with Seattle’s own Harlan McCarthy.

As a native of St. Louis, I’ve noticed that one sport hole the cities of St. Louis, Kansas City and the state of Missouri haven’t filled is the NBA.

Both of the area’s teams have relocated since their founding, the Hawks from St Louis to Atlanta in 1968 and lastly the Kings from Kansas City to Sacramento in 1988.

That Hawks franchise heralds the great Lenny Wilkens, who—despite his initial dismay at the prospect—played for the team for eight years after being drafted sixth in the 1960 NBA Draft.

“I wasn't that excited about it, because we had played in St. Louis during my junior year,” Wilkens recalled.

“I knew what kind of city St. Louis was. So I wasn't that happy about it, but heck—I was selected. So that was important in itself.”

The kind of city St. Louis was was one that included severe segregation.

“ I bought a home after I got out of the service and for sale signs went up everywhere. Despite that, I was not going to be intimidated.”

Obviously social injustices remain apparent, and the NBA has been quite notable in the discourse. Last year in “The Bubble”, social awareness was apparent on jerseys, and a few games were even canceled in protest, which was generally well-received. Wilkens added his own thoughts on their motives (and eventual return).

“I thought the players discussed it, they talked about it, and they decided to go back, which I applauded them for doing,” he said.

“Every time you saw a game on TV, you saw on the floor that said Black Lives Matter. They want the world to know that they’re paying attention. That we can be better as a country. It’s important to vote and a lot of players are getting their franchise’s city-location available to vote.”

For Wilkens, adversity has been a challenge he accepted. He, along with 12 other future Hall of Famers, protested at the 1964 All-Star Game in Boston.

“CBS told us if teams were not out on the floor in twenty minutes, they would have to go with another program,” he added.

“The NBA acquiesced and promised us we would have a pension plan by June, and we did.”

Hall of Fame Celtics coach Red Auerbach would coach the East All-Stars to a 111-107 victory against the West. That game would become one of a long list of instances when Bill Russell bested Wilt Chamberlain. (Wilt voted to play with or without the pension.)

Coincidentally, Wilkens and Russell could have been teammates in St. Louis. Russell, however, was traded after being selected in the 1956 draft, for Hall of Famers Cliff Hagan and Ed Macauley (who was a St. Louisan).

“It was unbelievable to me that you'd give up Bill Russell," Wilkens remarked.

"I mean, this guy was an All-American in college. He blocked shots and he ran the floor. [But] St. Louis back then was one of those cities where [Blacks] couldn’t eat in the restaurants downtown until 1960.”

By then the Celtics had begun their legendary 8-year championship run, in which they would see Wilkens and the Hawks two times, in the 1960 and 1961 Finals, before the close of the Bob Pettit era in 1965.

Wilkens would continue to play with the Hawks until 1968. He was then traded to the Seattle Supersonics and the Hawks would move to Atlanta. The move was due to the inability to upgrade the Kiel Auditorium and the birth of the St. Louis Blues hockey franchise.

In Seattle, Wilkens become a player-coach similar to Russell, a rarity for many—especially African Americans. There he would play alongside (and coach) my neighbor, the late Lee Winfield.

“The time I stayed here in Seattle he was excellent,” Wilkens recalled.

“Later on, Seattle wanted me to play or coach and I wound up being traded. At the time I decided to keep playing rather than coaching because they didn’t pay coaches the money they should.”

Wilkens was shipped to the Cleveland Cavaliers in 1972—an unpopular decision at the time, given the win improvement of the Seattle Supersonics in each of Wilkens’ seasons as player-coach.

Wilkens’ impact on the team would be further shown by the Supersonics’ firing of two coaches that year. Tom Nissalke & Bucky Buckwalter were both let go during the losing season. Wilkens would return to Seattle in 1977 to coach full-time, winning the NBA Finals in 1979.

When asked about player-coaching existing today, he had this to say:

“It’s too hard now. It’s too difficult now because you have to spend a lot of time teaching and explaining," he said.

"When I was in college, we had to do four years. Today kids come out after one years or two years so it’s much they still have to learn. A coach has to be able to teach and explain. I think it makes it tougher today and you can’t do justice to both.”

Wilkens’ opportunity is one that is missed today. The Rooney Rule in the NFL, which requires at least the formal consideration of minority head coach candidates for any openings, has left other US sports leagues with additional questions. Wilkens emphasized his opportunity to coach.

Growing up in Brooklyn, Lenny Wilkens was a fan of baseball legend Jackie Robinson, who would eventually convince Wilkens’ friend Tommy Davis to play for the Brooklyn Dodgers over the New York Yankees.

A baseball fan as a youth who chose to pursue basketball, Wilkens cites Robinson as his role model.

“A great opportunity was that I got to meet [Jackie Robinson]. Great human being. He was a guy who played with fierceness, intelligence, team player, and you were not going to intimidate him," Wilkens said, echoing the resolve he would later display in St. Louis.

"Those were qualities I admired in him. He was a big role model to me. My dad died when I was 5 years old, so my mother was a big influence on me. Same for the Father in my parish. Father Tom Manning.”

Wilkens credits his support system and Fr Manning for helping him get recruited.

“The coach from Providence came to talk to me because my parish priest wrote to the athletic department telling them that they should take a look at me,” Wilkens noted.

“They had these workouts, and I went out to one of the workouts that Providence College had. I don't know what they could have seen in me, but eventually I received a scholarship.”

Wilkens pointed out that “if you want to have a great opportunity to be recruited, you want to be as good as you can be, so you have to work at it. If you want to be a good player you need to make plays and take advantage of your teammates. You have to be ready to play every night and you have to listen to what your coach has to say.”

While the need for discipline and a solid work ethic is timeless, one thing that isn’t quite the same today as in his day is economics. This year, the NCAA’s board of governors decided to allow athletes to receive endorsements and compensation. (Though they recently tabled a vote on the matter.)

Wilkens has his own thoughts.

“When I went to college, we had a scholarship, and I wouldn’t have been able to afford to go if I didn’t have a scholarship. At the time, we were pretty satisfied with that,” he explained.

“It’s a different world today. Guys are being exposed to different things now and feel as if they should be paid. For me, I think they should start a fund for them and if they stay in school for so many years, they receive funding based on that.”

At Providence, Wilkens played in the Joe Mullaney era, which after Wilkens included John Thompson Sr, who later became a legendary coach at Georgetown. Thompson passed in August. In Wilkens’ view, “John was a great human being. Great student of the game and I thought he was a very fine coach.”

Wilkens’ own college basketball success did not start until his junior year, as underclassmen played on the JV team. During both of his upperclassman years, he led his team to the NIT (then the premiere college basketball postseason tourney). He credits his military service for offering another kind of stability.

“The four years were great for me. Providence had some great teachers. Most were Dominican Fathers who taught, although we did have lay teachers. At that time ROTC was mandatory the first two years, so I was in ROTC. I went to advanced ROTC because I felt if I was going to go into the service, I wanted to go in as an officer. When I graduated, I not only had my degree, but I was second lieutenant in the Army.”

His time in the military included the 1961-62 season, when he played and served at the same time (though participating in only 20 games that year). His departure from duty involved a challenging adjustment to the racial climate outside of the base.

“I saw more bigotry when I was out of the service. When I was in the service, it was more about serving the country.”

Concerning America's more recent racial reckoning, Wilkens emphasized the need for dialogue and encounter, not unlike Pope Francis’ constant exhortations—but also with the understanding that change requires action and accountability.

“I’m not for destroying and vandalizing property. I think what we need to do is have conversation. Talk about how we make the police department better. We have to make politicians accountable. Everyone has to vote. We have to vote for city council members, mayors, and governors," he said.

"We need to have those kinds of talks. I don’t think in this day and age you can say we can’t have a police department, but we have to have a better one. How we can make it better are questions we have to ask.”

Making things better was something Lenny Wilkens undoubtedly did in the NBA with his various clubs. Not only was he assistant coach to the Dream Team, but in the 1994-1995 season he became the then all-time winningest coach in the NBA. He surpassed fellow Brooklynite Red Auerbach.

Wilkens remembers Auerbach calling him and congratulating him, as well as then-commissioner David Stern, a legendary sports executive who passed away a little over a year ago.

“He did a good job for the NBA. He brought the league into the age of marketing.”

Another towering NBA figure who died that same month was Kobe Bryant. Wilkens had nothing but praise for his fellow Black Catholic.

“You knew every time he stepped on the court, he was ready to play.”

Wilkens retired in 2005 to spend more time with his wife of over 40 years, Marilyn, and their family. Wilkens now lives between Seattle and Atlanta with her, their children, and their grandchildren.

He recently ended his foundation’s annual dinner, but continues to do work in the community, citing it as his passion and his personal duty.

“I don’t like what is happening today and I think it’s important to bring attention to injustices. When Black lives matter, all lives matter.”

More on Wilkens can be found in his biography “Unguarded: Forty years Surviving the NBA” and in his “Legacy Basketball Clinic Series”.