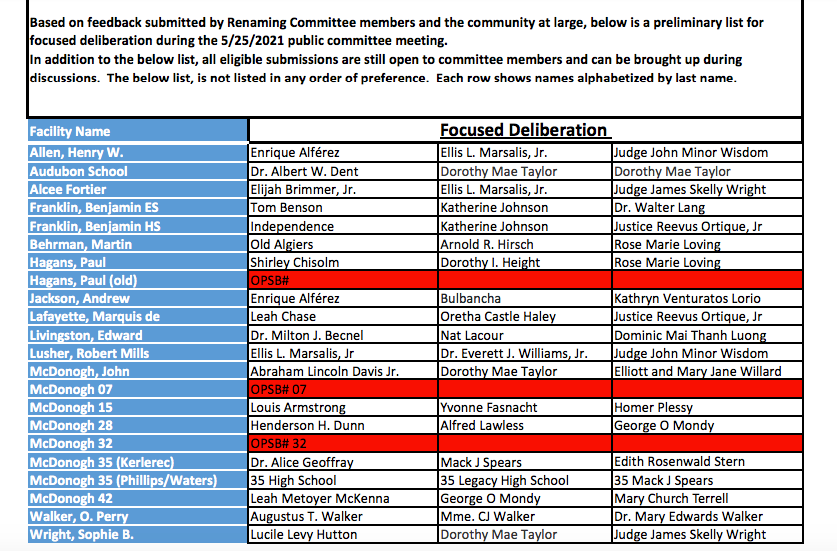 New Orleans is continuing its crusade to rid its public spaces of tributes to White Supremacy—this time focusing on public schools. A public, virtual meeting scheduled for 4pm CST today will deliberate on the specifics.

The effort comes just months after the city moved to rename various parks and monuments by means of a city council commission—which made final recommendations including a number of Black Catholics. That process is nearing completion, with a final vote scheduled for later this year.

The public school renaming process is running on its own track, falling under the purview of a separate renaming committee run by the Facility Renaming Initiative of the Orleans Parish School Board.

The latter work focuses on 22 schools in the city named after national figures such as Benjamin Franklin, John James Audubon, Marquis de Lafayette, and Andrew Jackson—all of whom owned slaves—and segregationist locals like Martin Behrman, Alcee Fortier, and Sophie B. Wright.

The name of John McDonogh, an entrepreneur who made a fortune in New Orleans (as well as a scene, engaging in both slavery and the virtual exile of African Americans to Liberia), accounts for 8 of the school monikers now in need of a revamp.

Given the nature of the city, it’s no surprise that Black Catholics are again found in good number among the proposed replacements made public this week.

These include Leah Chase, the late New Orleans chef par excellence who loomed large in the previous renaming process that last made headlines in March. (A Louisiana Civil Rights Trail plaque in her honor—and silhouette—was revealed at her former restaurant just a few weeks ago.)

Homer Plessy, perhaps the most significant figure on the list, was also Catholic and is being considered in this, the 125th anniversary year of his famed streetcar desegregation attempt which led to the Plessy v. Ferguson case in the Supreme Court.

The Zoom link for this afternoon’s meeting can be found here.