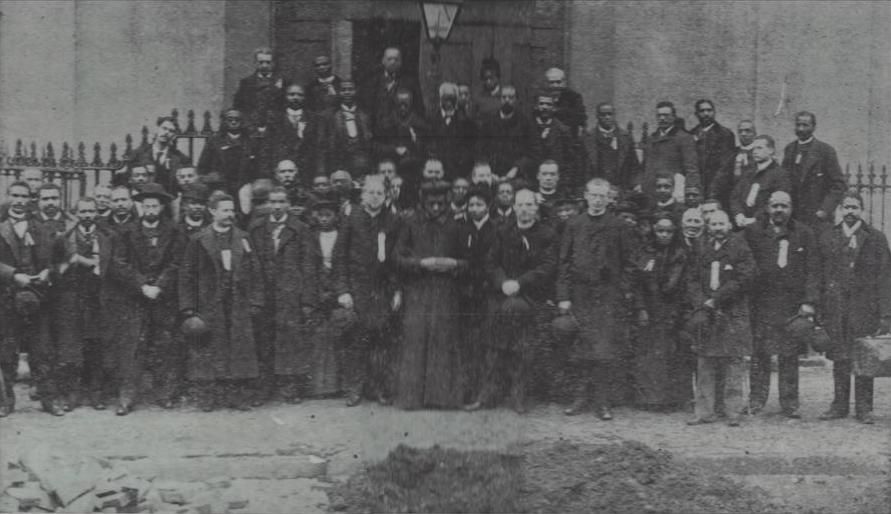 As Pope Francis’ celebrates a Chaldean Divine Liturgy during his historic trip to Iraq—two firsts for any pope—many Catholics are becoming more familiar with the multitudinous such rites and churches within the one Catholic Church.

Last month, in a feature for Black History Month, I myself was published in America Magazine speaking on such matters, in an interview I conducted with Erika Rasmussen late last year.

The topic? An “African American Rite”.

This subject is one to which I have become particularly devoted since my conversion to Catholicism in 2019 (my recent Protestant past being an aspect many critics of the interview were wont to point out).

What such critics don’t realize, however, is that 1) Despite being raised for many years in the Black Church, I had not been a member of a Black congregation in nearly a decade before becoming Catholic, with even that most recent stint being a short one, and 2) I do not look to a rite as the primary way forward for Black Catholic patrimony.

Indeed, though the topic of a rite had been at the forefront of my mind after my first session at the Institute for Black Catholic Studies last summer, my realm of knowledge was soon expanded upon hearing of the Anglican Ordinariate(s).

Tantalizing as the liturgical element may be for me, a Black Catholic in a Black parish, the fact is that the issues facing our community and demanding a change are about more than the music we sing and the structure of the Mass. (And I said as much in an article for GenMod in January, shortly after my America Mag interview occurred but well before it went to print.)

Black Catholic priests, parishes, schools, sisters, and programs dedicated specifically to the evangelization and care of the Black community are under-resourced and few in number—and often growing fewer without Black permission.

Today’s Ordinariate members faced a similar situation not so long ago, wherein their concerns as a group—which, ironically enough, can include former Methodists such as Servant of God Sr Dr. Thea Bowman and myself—were fully under the purview of their local US diocesan bishops.

Bishop Steven J. Lopes, a major architect of the Ordinariate cause (and its first official bishop), put it this way:

Or if a previous proposal for corporate reunion incardinated the converting clergy into local Dioceses, and if those priests were then reassigned or assimilated into the local Diocese so that they could not minister to their former communities and foster the particular identity of those communities, then a new approach might involve creating a juridical structure which would allow the incardination of priests and the canonical membership of laity so that their distinctiveness was not lost to assimilation into the much larger sea of Catholic life.

Fortunately for Anglicans (and now Lutherans and a number of other White Protestant groups), the efforts of Lopes, Vatican officials, and Pope Benedict XVI led in 2009 to the creation of the personal ordinariates, a set of special jurisdictions across the globe that would provide for such Christians what local bishops could or would not.

A similar structure was proposed for Black Catholics in the 1800s during the Plenary Councils of Baltimore, a period during which the Black populace was seen by the Church as a mission territory—despite being largely non-immigrant, permanent, and Christian.

Alas, the proposal not only failed, but so did its children in the decades and centuries to come. Today, we Black Catholics remain a group not fully welcomed in and not fully on our own, close enough to commune but far away enough to be cast aside when the going gets tough.

What’s more, that which began behind closed White doors arguably devolved when it became in the late 20th century—behind Blacker doors—a discussion primarily about liturgy. (The National Black Catholic Clergy Caucus abortively proposed a study for a rite in the late 80s.)

Indeed, when hotter heads pushed for more and demanded a substantial measure of hierarchical independence, the controversy and fallout was so great that an entire schism occurred, forming a new Black denomination known as Imani Temple.

From what I have seen and heard, the discussion of such matters has faded almost entirely since (and apparently because of) the incident—even among those living Black bishops, such as Cardinal Gregory and Bishop Terry Steib, who supported the concept in its incipient stages.

And so we must consider anew what was always a matter of prudence and of the mission of the Church: to expand the Kingdom of God and serve the people of God.

It behooves the Vatican now more than ever to give Black Catholics an opportunity to receive from her bounty that which Ethiopia receives by ancient heritage, the Congo by liturgical reflection, and the Ordinariates by patrimonial right.

Unlike a rite, which—contrary to popular opinion—one cannot “join”, an African American Ordinariate would provide all-welcoming parishes adhering to Black patrimony, and for relevant individuals and denominations the opportunity, according to their desires, to join the Catholic Church without giving up their congregations, worship, prayer, moving, and being.

These concepts exist in seed form at present. I rediscovered (and for the first time, fully understood) my Black patrimonial roots when I decided to become Catholic. And for me it was no chore to travel the extra few miles to attend a parish reflecting Black patrimony, where, among other patrimonial elements, the songs of my Protestant youth were sung in the presence of the Blessed Sacrament.

But for many, this is not possible, and on the part of many, it may not even be valued. How many bishops in our land think that Black Catholics will be just fine without parishes reflecting even the slightest unique thing about them?

How many Black Catholics feel the same?

The NBCCC-led survey in the 90s indicated Black Catholics—canonical expertise notwithstanding—didn’t want an independent rite. but did want more representation in their parishes. A similar survey conducted a decade ago by Notre Dame and the National Black Catholic Congress indicated that three-quarters of Black Catholics don’t even worship in Black parishes. Last month’s Pew study put the number even higher.

Where does leave Black Catholics who are dedicated to Black patrimony? And Black Protestants dedicated to the same but looking for an extra 5 sacraments? Is it enough to say “At least there’s a Catholic parish at all”—knowing full well that the closure/lack of Black parishes is a tried and true formula for lapsation, ignorance, and apathy?

Realistically speaking, we have the resources as well as the manpower. Even if Black vocations are low, and Black parishes and schools constantly in danger of being the first to go, the reality is that Black Catholics are here, we are many, we are funded (if not owed), and we only need to see that the hierarchy—the USCCB, the Vatican, and Black Catholic institutions themselves—are dedicated to our cause.

Vocations and sustainability will come when does due support for the Black societies, orders, and institutions that have built up our community for so long, and the support of those Black entities in turn for the overarching changes necessary to produce a thriving and growing Black Catholic patrimony in the 21st century and beyond.

If every Black parish in America joined a Black ordinariate, if Black institutions and ministries were never again subject to the whim of bishops—Black or White—who never felt them necessary in the first place, if married Black men from within and outside the Church were fully welcomed into Holy Orders as are so many of their White brethren, if Black Catholic liturgy were in more than an optional hymnal but in a missal, if St. Joseph’s and St Augustine’s once again became dedicated places of formation for Black and Black-allied clergy—is this not the “racial healing” so often mouthed by the hierarchy? The “racial reconciliation” so eagerly sought?

Provisions are being made for groups all around us. The Ordinariate enjoys full freedom from diocesan interference, the appointment of their own non-episcopal ordinaries, the admission of married clergy to the priesthood, the creation of specific seminary formation programs, and—yes indeed—their own “use”/rite of the Mass.

In fact, the publishing house that prints their unique missal was originally started by Cardinal Herbert Vaughan, founder of the Mill Hill Fathers—whose American branch would later spin off, with Vaughan’s permission, to form the Josephites.

As I seek to join said society, committed from its founding to serving African Americans in particular, what should stop me (and all lovers of Black patrimony) from seeking as well the benefits of an enlightened age, wherein the Pope himself has called for the inculturation so incomplete in the post-Vatican II era?

The same Pope whose close friend (and Pentecostal bishop) Tony Palmer teamed with him to (almost) issue a potentially earth-shattering document proclaiming the unity of Catholics and Protestants.  Palmer died tragically before the plan could commence, and Pope Francis happens to differ from his predecessor in that he does not typically encourage denominational conversion.

Even so, Black Pentecostals have also sought out Rome in recent decades, underscoring the unity possible when Black patrimony is seen in its proper light—that of Christ’s diverse liturgical plan for his Church. This same light shows that the founder of Black Pentecostalism was himself informed and enlightened by a Catholic upbringing.

In a similar way, all streams of Black patrimony can be traced back to a Catholic root, that of the Christian faith germinated in the womb of Mother Africa and her unwilling sojourn in a strange land. Through it all, Rome has often reached out her arms—only to be rebuffed by strange bishops.

When her African-American children once again reach out to her themselves, will they be received as have been her Anglo-American progeny?

Only time will tell.