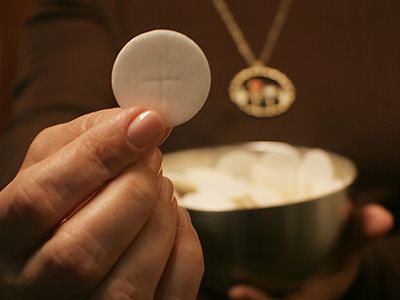 This past weekend, my family and I vacationed in North Tahoe, California. On Sunday, we located the nearest Catholic Church and attended the only Mass offered, which was bilingual (English/Spanish).

We attend Mass every weekend, and even during COVID-related church closures, we streamed Mass online. One of the things I’ve always loved about being Catholic is being able to attend Mass anywhere in the country—the world, really—and worship God in a familiar setting.

Sunday was no different. We spoke the responses, stood, sat, kneeled, and prayed on cue. Though we were in a new setting, we were still accustomed to the Mass.

We walked up to receive Holy Communion, with my 14-year-old son leading our family line, and I heard the priest question my son. I saw my son nod his head and respond. When my 12-year-old son received communion next, I noticed the priest intently watching him eat the consecrated host before giving my daughter Communion next.

Even before I asked my son after Mass what the priest had asked him, I already knew. As the Mass ended, I thought of speaking with the priest, but my son didn’t seem to think twice about his interaction with the priest, so I decided not to press the issue.

However, as we left the church, and while walking to our car, I did ask my son what the priest said to him.

“He asked me if I’d received my first Holy Communion, and I said yes, so he gave me the Eucharist.”

I didn’t want to voice my frustration aloud, or air my assumption that the priest had asked my son that because we are Black. I didn’t want to say anything that might lead my son to have negative feelings about attending Catholic Mass, because I knew that could be long-lasting.

My Catholic faith was passed down to me by my mom and her side of the family, who are lifelong Catholics. However, my dad considers himself agnostic. He relayed to me an incident in his youth that drove him away from Christianity for good.

His mom had bought him a Bible and sent him and his siblings off to attend a local Protestant church in the mid-1950s. My dad said he remembered clutching his Bible as they walked to the church, unsure what to expect but excited to see what it was all about. When they arrived, they had to sit through a service in which a White pastor used a racial slur to refer to Black people.

My dad said that after that service, he decided he wanted nothing to do with that God, and he’s never gone back to attend a service (other than special occasions) since.

Though at first I tried to put what had happened at Mass last Sunday behind me, I decided to publicly tweet about it on our drive home Monday. Many people responded in a thoughtful way. However, I was appalled by the number of people who assumed my son had somehow approached the altar in an irreverent manner that made the priest question if he was worthy of receiving communion. Again implying that my son doesn’t know the “correct” way to receive the Eucharist.

Other people said the priest was doing his job and “defending the Eucharist”—as if a Black teenage boy in line to receive communion was somehow a threat. As a mom of four, with three Black boys, I already have to be worried about how they might be treated by the police or stereotyped because of their appearance. The color of their skin, their hair, and their features are too often seen as threatening for no reason at all.

But I never would have expected that racism to find them at the altar.

Though there are over 3 million Black Catholics in the United States alone, and millions more around the globe, all too often we are considered “foreign” to the body of Christ in this land. We are too often overlooked, our churches and schools are underfunded, and we’re almost invisible in Catholic media.

Instead of fostering anger or resentment, I hope my experience will open people’s eyes to the reality that many Black Catholics have faced, and I hope more is done so that we can feel at home no matter what church we happen to attend.