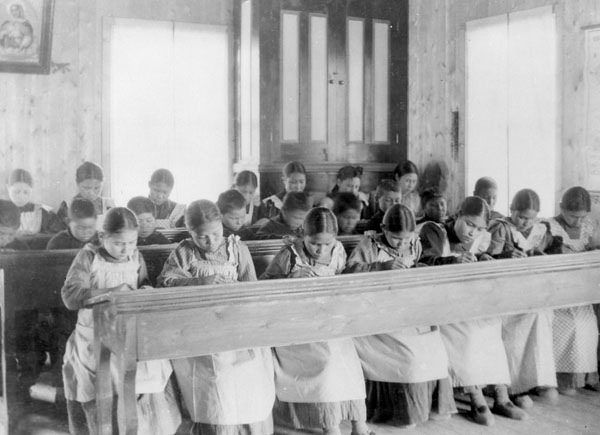 Reflection: Far from "worth it", residential schools were a sin against Christ

On Thursday, Declan Leary took to the pages of The American Conservative to let us know that residential schools in Canada were worth it because people received Christianity.

This was more than disgusting. It was blasphemy:

“It is also blasphemous to make use of God's name to cover up criminal practices, to reduce peoples to servitude, to torture persons or put them to death. The misuse of God's name to commit a crime can provoke others to repudiate religion. Blasphemy… is in itself a grave sin.”
(Catechism of the Catholic Church #2148)

The whole premise of the piece depends on the schools themselves being justified. They were not. They were instruments of genocide. Given that these institutions were run by the Church, using Jesus Christ as the justification makes the crime doubly horrific.

That the author of this piece could, with cool deliberation, represent a religious justification for genocidal collaboration—and say it was “worth it”—is, as the Catechism teaches, a grave sin.

The continued error presented in narratives like that put forward by Leary is that Christianity requires colonialism and genocide, that the “salvation of souls” justifies whatever crimes are committed along the way.

But this is absolutely false. It is the comforting lie that the intellectual descendants of White Supremacists tell themselves to quiet their conscience.

Further, Leary’s attempted juxtaposition of Saint Jean de Brébeuf with the residential schools is inapt. Brébeuf was willing to (and did) die to teach strangers the Gospel. That we might be willing grains of wheat for the Gospel is one thing—a noble thing. To flip the script and be willing to kill others and subject them to all manner of genocidal tactics until they either die or embrace Christianity is blasphemy.

That Leary cannot tell the difference, only shows how deep the crisis is in the American Church.

Different versions of this narrative exist for different groups that are victims of White Supremacy. Whether it’s the Native people of the Americas, Australian Aborigines, or enslaved Black people, it is said that we, their descendants, should be thankful because, whatever the price, we got Christ.

Blasphemy! The bishops must root this out from the Church, or the scandal will be devastating.

There is an old story told among Venezuelans:

A Carib is brought in chains to a conquistador. The last of his village, his people murdered. A priest comes forward and says that if he is baptized, he will be spared and can go to heaven. The Carib asks if the conquistadors will be there too. The priest says “Yes, of course. They are Christians.” The Carib answers, “Well, just to be sure I’ll never see them again, I’ll pass on the baptism.”

I think about that apocryphal ancestor every time I see or hear something like what Leary wrote.

What people like Leary need to understand is that the victims of White Supremacy are not Christian because of White Supremacy, but rather in spite of it. That God can write straight with crooked lines does not mean the lines are not crooked.

If anyone, the victims of White Supremacy who did convert are the ones who deserve the credit—they are the ones who could see the truth of Christ despite the hate and hypocrisy of so many claiming to do His work.

Rather than being “worth it,” the residential schools are some of the greatest stumbling blocks created in Christian history. And they should be treated as such. Nothing justified them.

Christ is not the exclusive property of White people. The price of admission to relationship to Christ was never and will never be the loss of culture and community demanded by so many White Christians. Jesus never blessed and never will bless that. It is something that White Supremacists added to their conception of Christianity. And it is something they continue to demand.

We must now, in the name of Jesus, demand that it stop—for all time.

I love my faith. No Black person owes their faith to White Supremacy. That is the work of the Holy Ghost, the ancestors, and, yes, the White Catholics who actually cared more about Jesus and neighbor than maintaining supremacy. But no one owes any gratitude to White Supremacy, its institutions, or its allies. It was and is an evil that must be rooted out.

I know my fellow writers believe this, too. At Black Catholic Messenger, we are proud to say that we keep it Black and keep it Catholic. We also stand with all victims of White Supremacy, even (and perhaps especially) when the Church is the perpetrator.

At this point, White-Supremacy apologists may object: “Why do you put race ahead of the Church?” But this is a false choice. When we stand against White Supremacy, we are helping the Church, not hurting it. The Church is not wounded by speaking truth to power, but by ecclesial power wounding those who should be the recipients of the Church’s mercy and love.

Leary is right about one thing: that much of the facts surrounding the horrors of these “schools” was already known. But the conclusion Leary seeks to draw from this—that the outrage is manufactured—is simply wrong. As Sven Lindqvist reminds readers about the genocidal project that has dominated American history:

“You already know enough. So do I. It is not knowledge we lack. What is missing is the courage to understand what we know and to draw conclusions.”

What is happening now is a reckoning. A time when all the false justifications and prevarications must end. Oppression was never part of the original Gospel message. That so many of those entrusted with the Gospel message have claimed otherwise, for so long, is blasphemy and a scandal. What we are finally seeing is the collective courage to understand.

Christians are called to serve the least of these, not lord power over them. In an inversion of Matthew 25, we now see professed “faithful” Christians openly claim that cruelty in the name of Christ are works of mercy. This is a crisis of witness in the Body of Christ.

Hopefully the bishops will begin to understand that the greatest threat to belief in the Eucharist is this: the witness of “serious” Catholics, those that know the Tantum Ergo by heart, who have also internalized the logic of White Supremacy so completely that they can cooly look upon the utter destruction of peoples and cultures in the name of a White Jesus and say: “Worth it.”