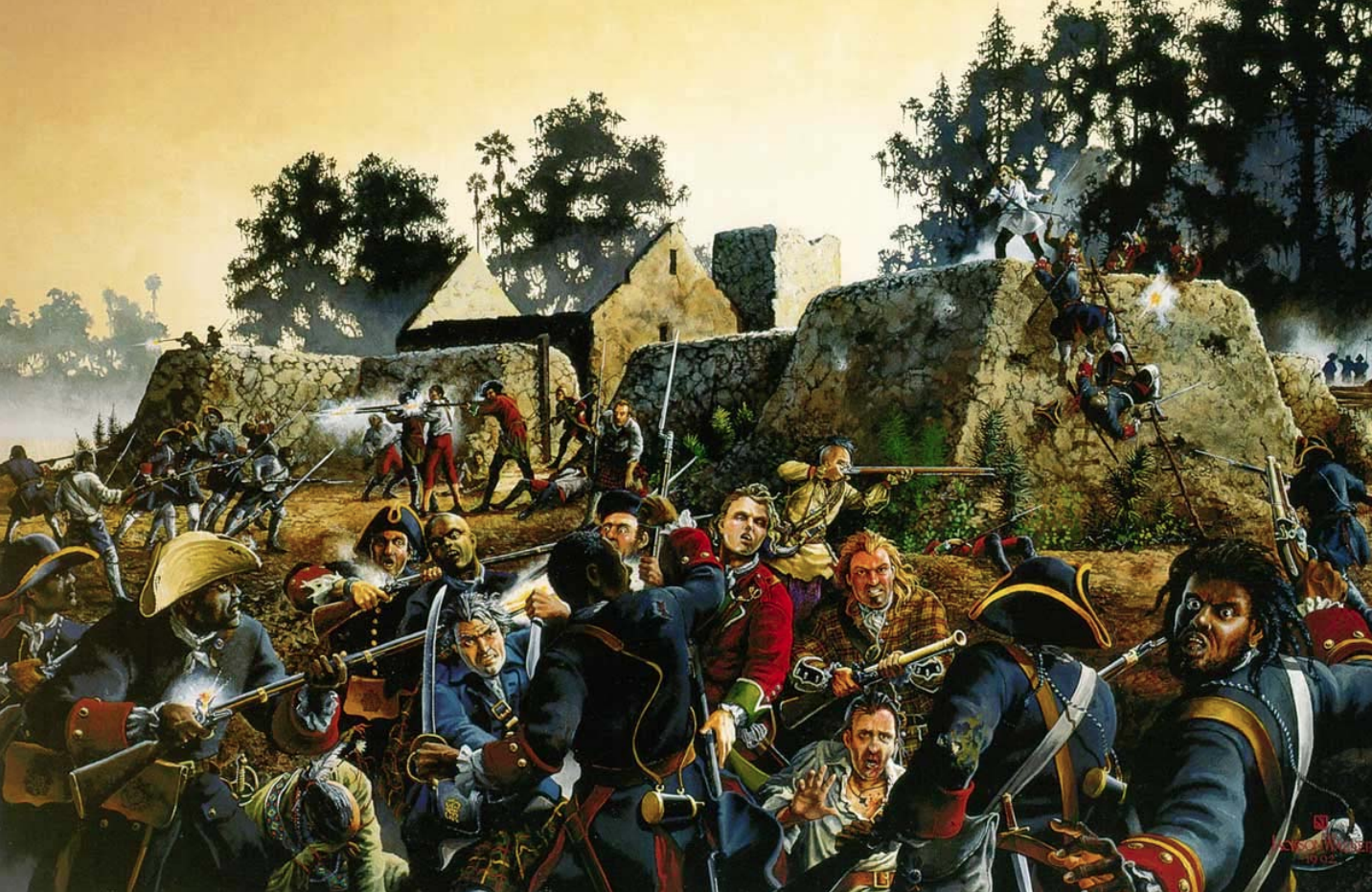 On this day in 1740, a free Black Catholic helped lead a squadron of his co-religionists in a siege of their former fort in north Florida, at the time a possession of the Spanish Empire. Known as “Bloody Mose”, the battle constituted a turning point in the era of British Protestant aggression against Spanish Catholics in North America, and brought about the end of the British invasion of Florida.

Francisco Menéndez, an Afro-Spanish soldier from the Gambia, was born in the early 18th century as a member of the Mandinka people before being kidnapped and sold into transatlantic slavery. He was owned by British traders in the Province of Carolina for some time before hearing of the Spanish crown’s offer to harbor escaped slaves in exchange for joining their military and the Catholic Church.

Like many Africans enslaved in the British possessions along the Eastern Seaboard, he thought this a fair deal and eventually fled across the southern Carolinian border with the help of Spanish-aligned Native Americans.

Following his arrival in St Augustine, the first permanent colonial city established in what would become the United States, Menéndez was baptized as “Francisco” and gained a reputation as a fierce warrior, assisting in the defense of the city against the British in 1727. He did not gain his full freedom, however, until 1738, following a legal petition.

That same year, he became the military leader of the newly established Fort Mose, built two miles north of St Augustine for the growing number of escaped slaves. There, the free Afro-Spanish community would establish arguably the first Black Catholic church in the future United States, as well as a largely self-sufficient outpost today recognized as the country’s first legally recognized free Black town.

British invaders would soon enter La Florida, however, under the leadership of James Oglethorpe, seeking to end Spanish and Catholic influence in the region as part of the War of Jenkins’ Ear. Approaching Fort Mose in the spring of 1740, his troops would capture and murder a number of Afro-Spanish inhabitants nearby, including at Fort [San] Diego just north of Mose, constituting the earliest known Black Catholic martyrs in American history.

Upon hearing of the invasion, the residents of Fort Mose retreated south to St Augustine, leaving their town to be occupied by Oglethorpe’s forces. The British takeover would not last long, however, as Bloody Mose would take place just days later—constituting a surprise attack on June 14th from Menéndez’s men, Native allies, and a Spanish column, who together quickly forced Oglethorpe’s own retreat back to Savannah.

The Black militia performed so decisively in the battle that it received an official congratulations from the governor of Spanish Florida, Manuel de Montiano. The fort was destroyed, but a rebuild would take place a little over a decade later, in 1752.

The British would finally achieve their goal of dominance in Florida in 1763, following the conclusion of the Seven Year’s War, taking over the colony of East Florida for twenty years, during which the Spanish inhabitants—including Menéndez and his fellow freedmen—evacuated to Cuba.

The Spanish would return from 1783 to 1821, but Fort Mose would be destroyed for good during a counterattack on US invaders during the Patriot War of 1812, again involving Afro-Spanish soldiers. The ruins would lie dormant for roughly 175 years before researchers recovered the site in the late 1980s.

Many Americans, of course, are not aware that Florida was ever a Spanish colony or a Catholic stronghold—and much less that a Black Catholic fort served as the first line of defense against the Protestant powers that would eventually come to dominate in the region and later form the United States.

At the former site of Fort Mose today stands a state park and a small museum, carrying the designation of a US National Historic Landmark since 1994. It will also soon host a reconstructed fort replica meant to honor the legacy of its former Black Catholic inhabitants. Underwater excavations are currently underway as a part of a project out of nearby Flagler College.

On June 6th, the La Florida Archive debuted its collection of historical records built from the Spanish Florida colonial and sacramental records dating back to the earliest days of St Augustine and its predecessor, Mission Nombre de Dios (established in 1565 with free and enslaved Black Catholics in tow). Mose and Menéndez are among its many included subjects and digital exhibitions.

Later this month, the Fort Mose Historical Society will host its annual reenactment of the Battle of Bloody Mose on June 25th, complete with a Black militia and a celebration honoring the society’s 25th anniversary. There, the organization will unveil “what is believed to be the world’s first historically accurate depiction of the original Fort Mose community and fortress”, presumably in conjunction with the reconstruction efforts which they helped to champion.

Thus, 282 years after Black Catholics helped defend the faith and freedom in Spanish Florida, the destination of the original “Underground Railroad” will come one step closer to receiving its full due.