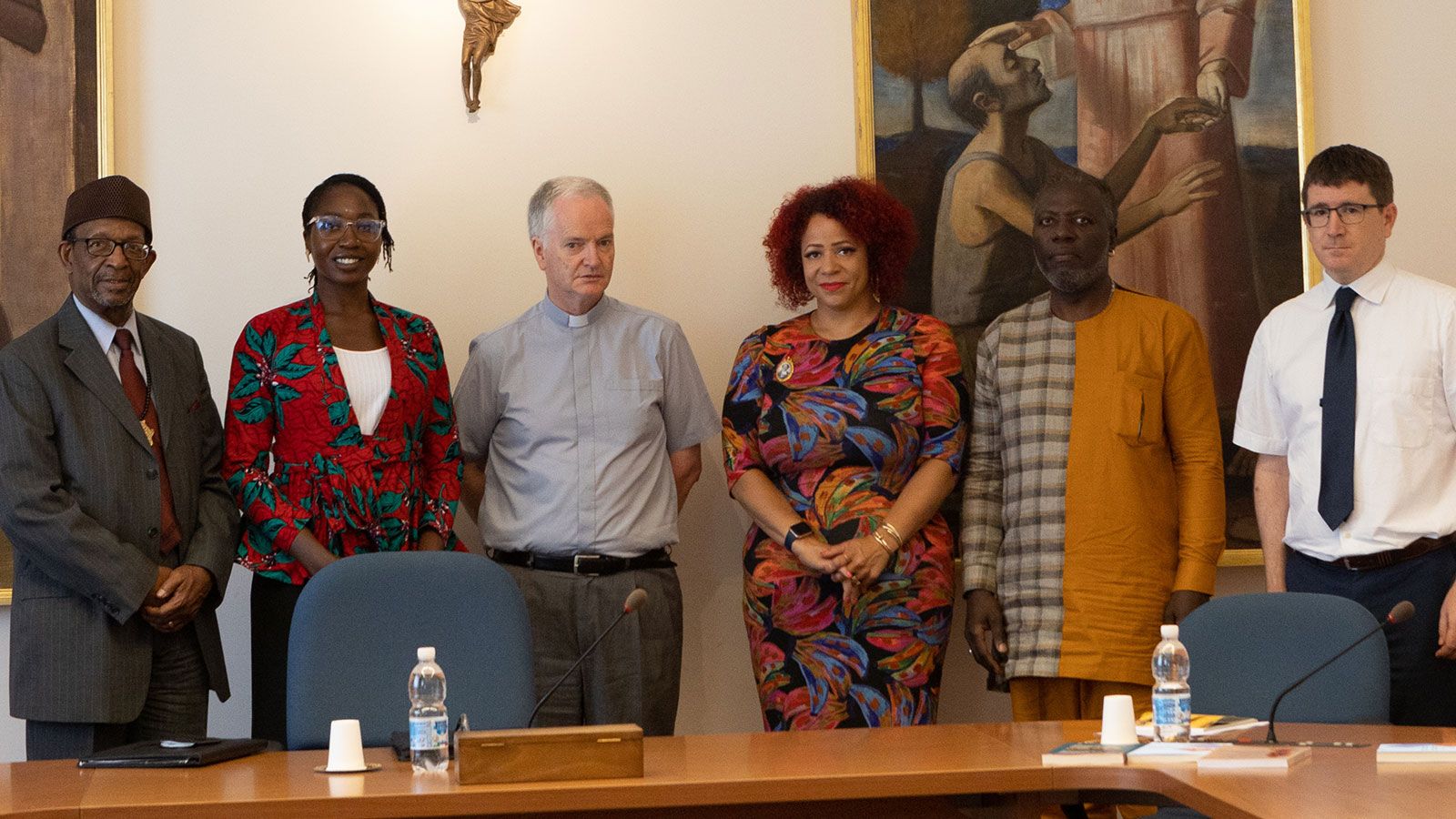 Reparations for slavery was the topic of a meeting at the Vatican on Monday, July 18th between a delegation of African-American scholar-activists and Bishop Paul Tighe, secretary of the Pontifical Council of Culture.

The gathering followed a five-day conference in northern Italy headlined by delegation member and “1619 Project” creator Dr. Nikole Hannah Jones, featuring an international group operating under the auspices of the Global Circle for Reparations and Healing.

“The purpose of the meeting was to begin a dialog with the Catholic Church on its role in sanctioning and benefiting from the Transatlantic slave trade and its legacy,” the group said in a press release following the meeting in Rome, where they delivered to the papal representative a 15-page document on strategies for healing.

“In his response, Bishop Tighe suggested that the moment is ‘ripe’ for the Presentment to be seriously considered by the Church under the guidance of Pope Francis.”

Included in the document is a call for the Catholic Church to officially rescind the various papal decrees sanctioning slavery in the New World, which date back to the 15th century and led to nearly unrestricted bondage of vulnerable populations in North, Central, and South America—including millions of imported slaves captured or purchased from Africa.

The Presentment also urges the Vatican to support local reparations efforts in areas affected by the Church’s slavery practices, including African Americans in the United States—where reparations legislation has begun to pick up steam in various cities and regions.

“Coming at a moment of Global reckoning on matters of racial justice and reparations, the spokespersons and representatives of the Global Circle and supporters present concurred that the meeting with Bishop Tighe was welcoming and productive,” the delegation said.

“In addition, they agreed, the meeting could provide a roadmap that allows the parties to move forward on reparatory justice.”

First Repair, an organization involved with the reparatory funding recently provided to Black residents of Evanston, Illinois, was represented at the meeting alongside groups from the UK, the Netherlands, and Italy. Physically present were a small cadre of African-American representatives, including Hannah-Jones of Howard University, Dr. Amara Enyia of the Global Circle, Kamm Howard of Reparations United, and Dr. Ron Daniels, who leads the National African American Reparations Commission (NAARC).

Founded in 2015, NAARC has for years been a major player in the reparations movement in the United States, collaborating with US Representative John Conyers Jr. of Michigan on the later iterations of his H.R. 40 reparations bill, which he introduced in every Congress since 1989. Conyers died in 2017 and the bill has since been taken up by Rep. Sheila Jackson Lee of Texas—who joined NAARC, Reparations United, and First Repair for a virtual rally in support of H.R. 40 this year on Juneteenth.

NAARC was also a driving force behind a letter sent to Congress this February for Black History Month, calling on the legislators to move forward on the stalled bill amidst the renewed focus stateside on the long-term effects of slavery and systemic racism. A sizeable number of Catholic groups appended their names to that document, which held more than 350 signatures.

The Vatican itself has never formally apologized to African Americans for its role in the Transatlantic Slave Trade, though Pope St John Paul II apologized to Africans multiple times during his pontificate. In 2015, a Black parish in Oakland, California requested that Pope Francis make a formal apology during his visit to the United States that year, but no such move was forthcoming.

Last year, the Jesuits—the pope’s own religious order and currently the largest in the world—committed to funding $100M in reparatory efforts to right its wrongs related to slavery in the US, especially its infamous sale of 272 enslaved African Americans from Georgetown University in 1838.

It is not clear whether any Catholics were represented among the delegation in Rome this week with Tighe, but Hannah-Jones was raised in the faith and is a 1998 graduate of the University of Notre Dame.

Absent from the meeting was Pope Francis himself, who is traveling this week to Canada, where he will meet with representatives from the First Nations communities to apologize for the Church’s role in colonization and the scandal of forced relocation to residential schools.