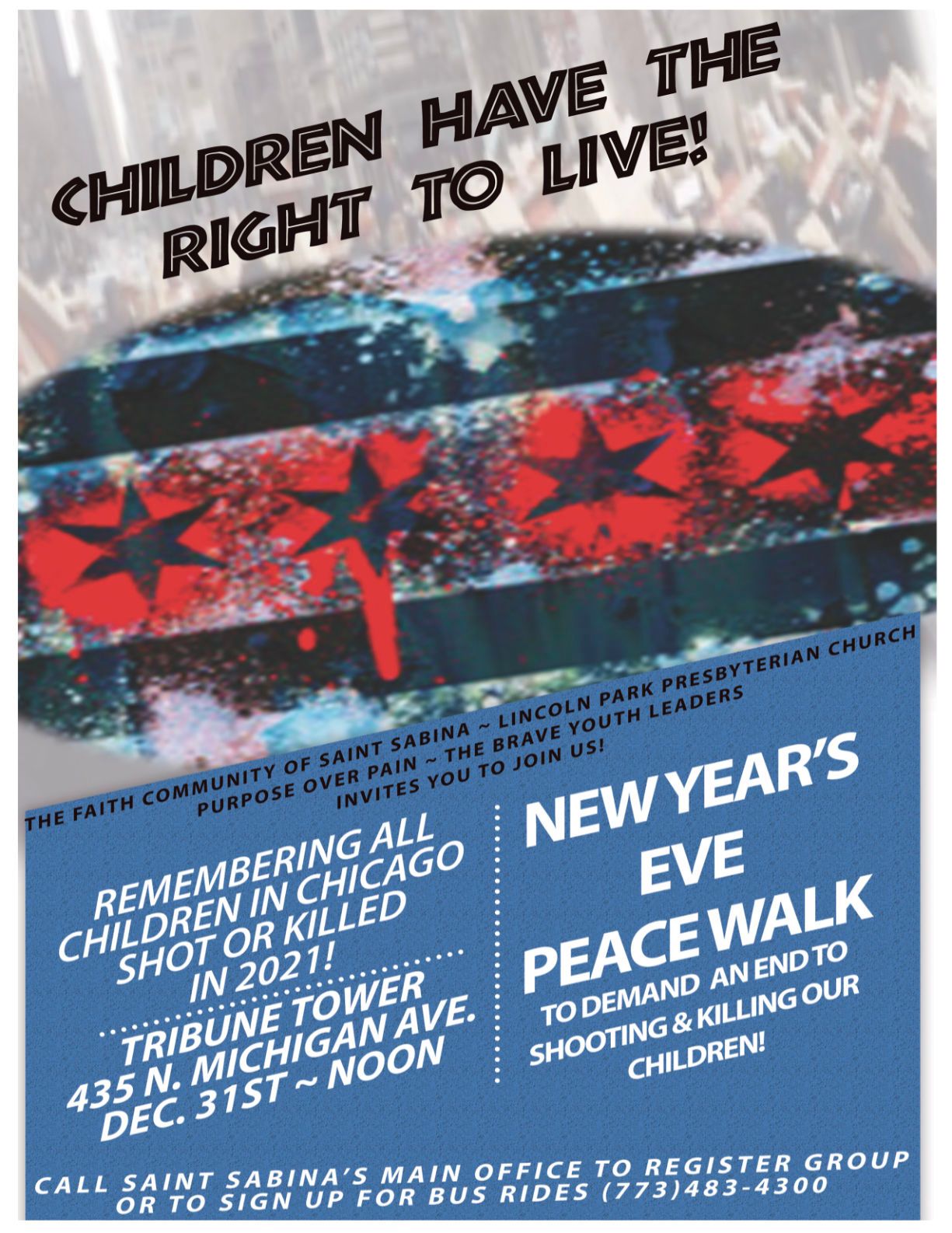 St Sabina Catholic Church in Chicago is hosting its first “Peace Walk” since September on New Year’s Eve, commemorating the lives lost to gun violence in the area this year and protesting inaction on the part of government officials.

The event was announced shortly before Christmas on social media.

“Our children are becoming an endangered species,” said pastor Fr Michael Pfleger, in a video sent out to his more than 125,000 Facebook followers.

“Chicago has had more than 800 homicides, and nearly 4,000 people have been shot and wounded.”

The rally will begin at noon CST near Tribune Tower (435 N Michigan Ave), following a similar format as the parish’s previous peace marches—which date back over a decade and have involved collaborations with organizations such as March for Our Lives, and prominent local figures like Chance the Rapper and Jennifer Hudson.

This year’s event is being co-organized by the parish; Purpose Over Pain, a local nonprofit for parents of gun violence victims; Lincoln Park Presbyterian Church; and B.R.A.V.E. Youth Leaders, St Sabina’s youth council for violence prevention (which earlier this year petitioned Governor J. B. Pritzker to declare a state of emergency concerning Chicago gun violence).

Cook County has seen more homicides in 2021 than in the past 27 years, dating back to the violent crime surge of the early- to mid-1990s, which hit large African-American communities such as Chicago’s harder than most other areas.

This year's Chicago-area shootings, as in previous years, are heavily concentrated in the Black community—especially the South Side, where St Sabina's is located.

Pfleger, whose 40-year tenure at the parish has occasioned a focus on social justice that has consistently made headlines over the years, held a press conference at the church earlier this month concerning the new numbers.

Therein, a set of demands were presented that concerned lackluster police response to violent crime, the need for more government intervention, and a perceived single-minded focus on COVID-19 from local officials even as murders and shootings surge.

He also noted that participants at the march will carry portraits of children who were shot to death in Chicago this year—a number that neared 60 as of last week. More than 100 children overall have been shot in the city during the same period.

As of early September, reports showed that more Chicago children had been shot in 2021 than had died from COVID-19 nationwide.

“Let’s stand up together to remember the victims and to demand and commit ourselves to ending Chicago’s greatest virus: the violence,” Pfleger said in his peace walk announcement video.

“Our children have the right to live.”