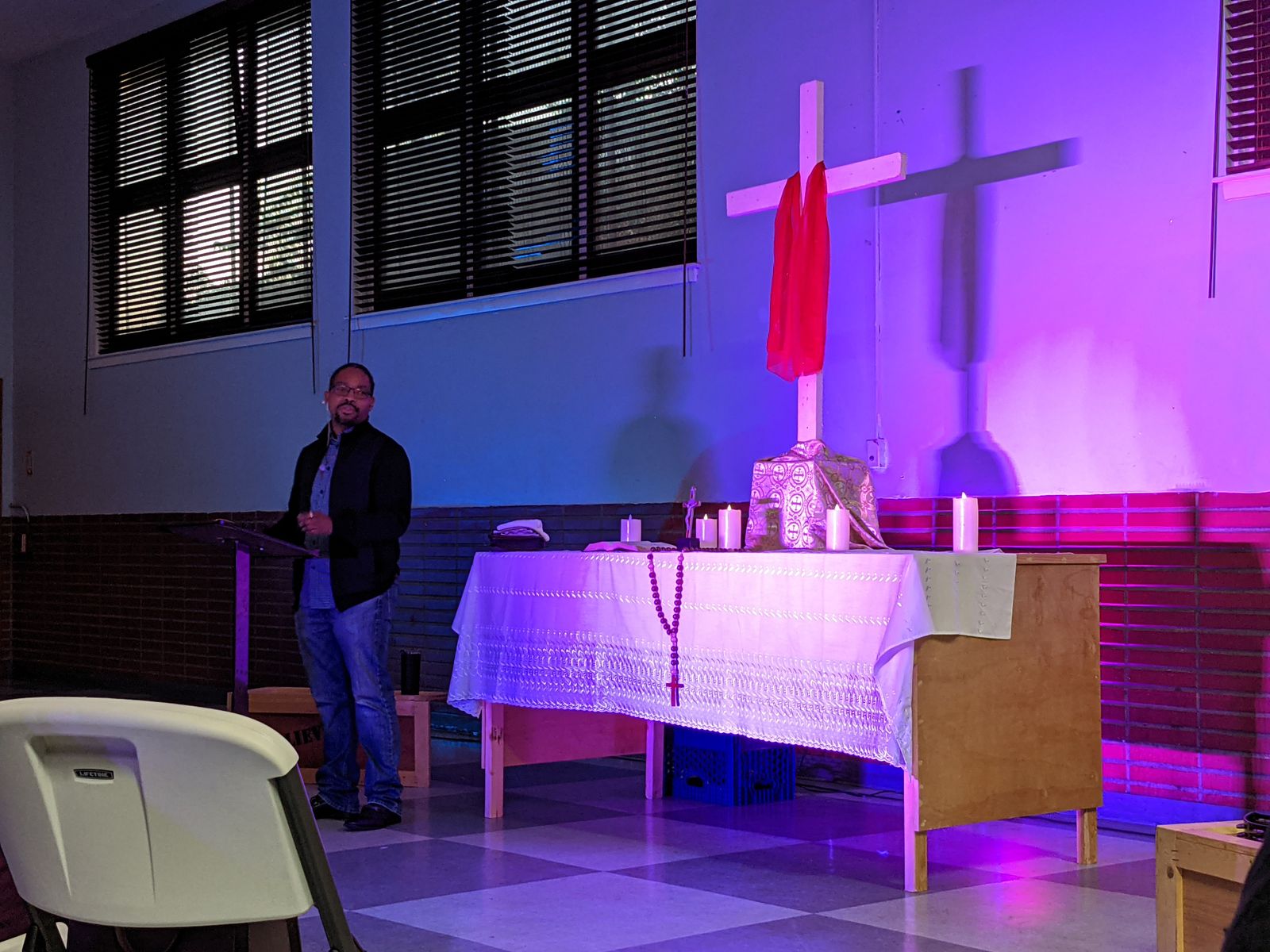 “There’s a blessing in the room today. Are you ready? Get ready? It’s already been released.”

This was the refrain last night as Willam King exhorted a room of young adults in Los Angeles as part of a three-week summer series with The Sower Ministry Los Angeles.

Entitled “WYA? Return To Me”, the series is something of a crossover event, hosted at King’s home parish of Holy Name of Jesus Catholic Church—run by the Josephites—but organized by the Latinx-focused TSMLA, part of El Sembrador Ministries’ ESNE network (said to be the largest Hispanic Catholic broadcaster in the world).

The crowd mostly reflected the mission of ESNE, which is to reach all Hispanic Catholics worldwide by 2022, but also present were a number of African Americans alongside King—including “Deacon Doug” Johnson, who serves at Holy Name.

Johnson originally seeded the TSM chapter in Los Angeles—others exist around the metro area—and King also preached TSMLA’s summer series last year, when he was a seminarian with the Josephites.

King’s topic last night was “Let It Go. It’s Not About You!”, a reflection on the need for believers to move on from past struggles and embrace the call of God to press forward toward holiness.

He included a personal reflection from his own experience, as the son of a parent struggling with addiction, and his ongoing quest to model Christ (especially as a Catholic public speaker who regularly encourages others to do the same).

“I’m struggling with forgiveness,” he confessed.

“I sing these songs and I preach these sermons, and in the back of mind I’m like, ‘William, you have to actually do it.’”

“We repeat this because it helps us remember that God is blessing us,” King said.

“God’s blessing has already been released on us, and it’s up to us to let go of all of our baggage so that we can accept it.”

King had been teaching the song to the young adult group recently, which allowed for vocal backup last night from Maria Viera of Heaven Sound (TSMLA’s house band, so to speak, established alongside TSMLA in 2018).

Singing last night as a duo, Maria and her brother Jesse led the assembly in worship, flanking King’s message before the meeting concluded with prayer led by Dcn Johnson.

The event was notable as King’s first in-person speaking engagement since leaving the seminary. Before his stint with the Josephites, in 2015 he became a rare Black seminarian for the LA, the nation’s largest archdiocese—which has no African-American secular priests—before exiting after facing racism from a classmate.

By 2019, he had entered the Josephites’ seminary in DC.

He returned home earlier this year to resume a number of ministries, including running Claver Cares—a nonprofit dedicated to serving the homeless, youths, and people with little to no healthcare—and preaching at devotional events like last night’s. (He has been doing both for the better part of a decade.)

King will also return for TSMLA’s day retreat on Saturday at Holy Name, and for the next two weeks of the WYA summer series (August 5th and 12th).

The series will continue to be livestreamed on the TSMLA Facebook page.