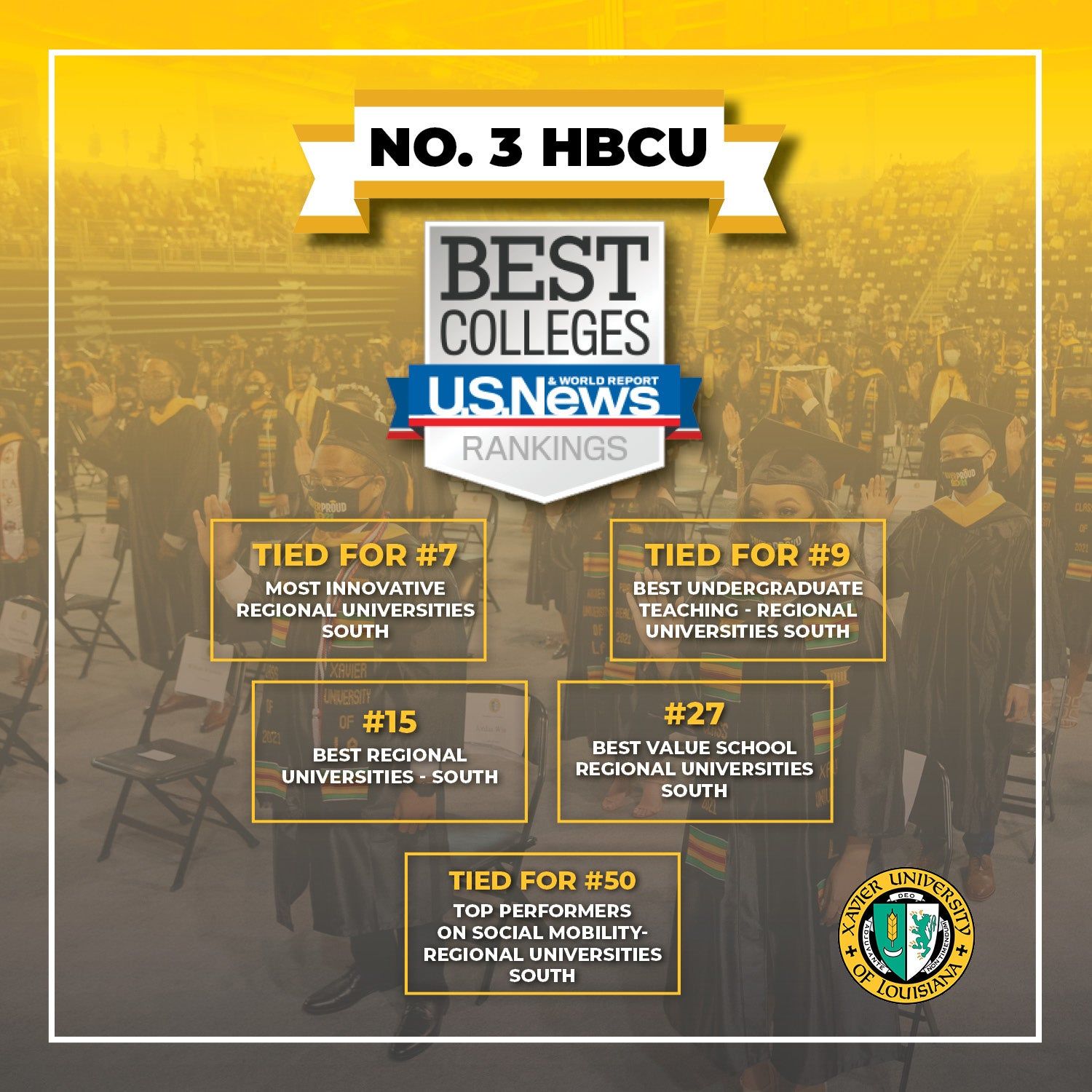 Xavier University of Louisiana has been named the #3 HBCU in the nation by U.S. News & World Report, the school announced on Monday.

The news comes just ahead of XULA’s October 6th anniversary, marking nearly a century of Black Catholic higher education in the United States along with an increasing reputation of academic rigor.

XULA was also ranked #9 for undergraduate teaching among universities in the South, #7 most innovative in the same region, and #15 there overall. The Princeton Review also named the school one of the country’s “387 Best Colleges” in its annual unranked list.

“[It] is a testament to the resilience and excellence of the university,” the school said in a press release, referring to the ongoing recovery from Hurricane Ida, which caused damage on campus as well as an evacuation.

“Even in the midst of restoration and rebuilding efforts, Xavier is still recognized as a remarkable institution.”

Founded as a high school by the Sisters of the Blessed Sacrament (with the help of the Josephites) 106 years ago this month, Xavier was originally intended by SBS founder St Katharine Drexel to revive Southern University (which left New Orleans in 1914 due to racist opposition from White neighbors).

The sisters’ new school would later be renamed officially after St Francis Xavier—the patron saint of Francis Drexel, St Katharine’s father—and attain university status in 1925, becoming the first and only Catholic HBCU in US history.

In the years since, Xavier has become known for its unique Catholic and social justice legacy, for its legendary former president and civil rights activist Dr. Norman Francis, and for its stellar science programs (producing more Black science grads, pharmacists, and doctors than any school in the country).

Trailing only Spelman and Howard among top HCBUs for the third straight year, XULA boasts one of the highest graduation rates among Black universities and is also one of the more selective.

In addition, over the past year plus, the university has announced graduate school partnerships with the Baylor College of Medicine, the University of Southern California’s physical therapy school, Ochsner Health System, Lehigh University’s College of Business, and most recently the Regis University Division of Health Services Education (announced just last week).

XULA also established a partnership with NBCUniversal’s journalism training academy in January, and was named an HBCU Institutional Leader by the Fulbright Program in May.

Further, the school has also shown itself a leader not only in educating future health professionals, but in keeping its own students healthy—requiring vaccinations for returning students this Fall and recently unenrolling those who did not comply.