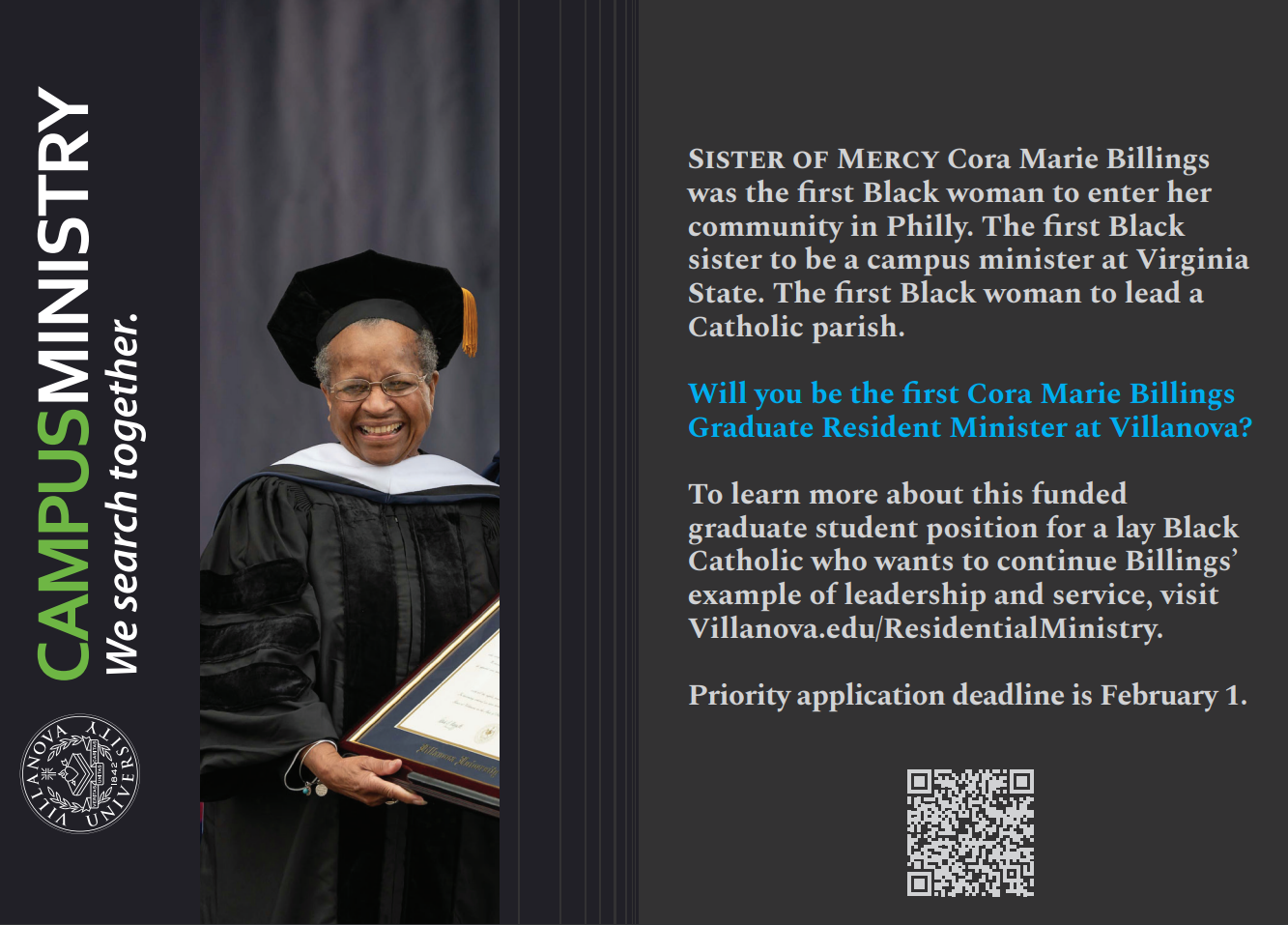 Sr Cora Marie Billings, RSM, the first Black member of the Philadelphia Sisters of Mercy, is being honored with a Black Catholic graduate fellowship in her name at her alma mater, Villanova University.

The news came last month courtesy of the co-creator of the fellowship, Dr. Tia Noelle Pratt—who earlier this year became the university’s director of Mission Engagement and Strategic Initiatives.

The fellowship entails the duties of a graduate resident minister, which include part-time responsibilities living and working in freshman residence halls and fully-funded studies for a Master of Arts (either in the Theology department or as a combination of another program and a certificate in Pastoral Ministry).

A stipend is included, and the fellowship is open to any lay Black Catholic “who wants to continue Sister Cora Marie’s vocation of extraordinary service to the Catholic Church and the People of God”, according to the university website.

“[They] should exemplify Sister Cora Marie’s commitment to anti-racism within the Church, as well as her exceptional example of local and national lay leadership.”

Born in the late 1930s, Billings is a 65-year member of the Sisters of Mercy, and was raised in Philadelphia before attaining her bachelors from Villanova in 1967. The next year, she helped co-found the National Black Sisters’ Conference under the leadership of the first Black Sister of Mercy overall, Sr Martin de Porres Grey (now Dr. Patricia Grey).

According to an interview with Global Sisters Report late last month, Billings was the first African American to teach in an all-White grade school in Levittown, Pa., outside of Philadelphia, and the first to teach at any Catholic school within Philly. She would later teach part-time at St Charles Borromeo Seminary.

In 1981, Billings moved to Richmond, Va., where she became the first Black religious sister to work as a campus minister at Virginia State University, one of the state’s historic HBCUs.

She also would serve for 25 years as director of the Richmond Diocese’s Office for Black Catholics and, in 1990, made national headlines when she became the first-ever African-American nun to lead a parish—that of St Elizabeth’s, a Black parish in the city that had recently lost its priest.

She remained in that capacity until 2004 (also taking on Holy Rosary parish), and later served on the Virginia Human Rights Council and the Mercy Sisters’ anti-racism team.

For her decades of service in and outside of the Church, she was awarded an honorary doctorate from Villanova in 2019. Earlier this year, Mount Mercy University in Iowa—an institution run by her congregation—inaugurated an endowed diversity and inclusion program in her name.

The fellowship at Villanova will likely assist in the same kind of work, increasing the Black Catholic presence at a university whose African-American student population hovers around only 5%.

“When we as Villanovans live the motto ‘Truth, Unity, Love,’ we embrace and enhance the opportunities to think critically, act compassionately and succeed while serving others,” said Billings on the new initiative.

“This also allows us to celebrate the diversity and equity of the Body of Christ.”