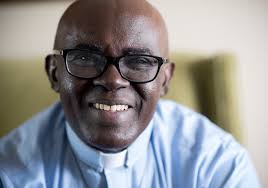 On January 8th, Fr. Ubald Rugirangoga passed away in Utah at the age of 65. He had been in the United States prior to the global shutdown in March and hospitalized since October after contracting COVID-19.

Fr. Ubald was born in Rwanda. In 1963, when he was seven years old, his father was killed because he was a member of the Tutsi ethnic group that was persecuted in the country. In 1973 he fled the minor seminary because Hutu seminarians wanted to kill the Tutsi seminarian group. From there, he went to Burundi as a refugee to continue his studies until 1978. Because of the suffering he experienced due to ethnic hatred, Fr. Ubald decided to become a priest, to preach love in Rwanda.

He was ordained a priest in 1984 and preached about love for the next ten years.

In 1994, Rwanda experienced a massive escalation in violence—a genocide that, according to Rwandan government officials, resulted in the deaths of 1,174,000 people in one hundred days. Fr. Ubald was able to escape in the middle of the night to Congo, then traveled to Lourdes, France. 80 members of Fr. Ubald's family were murdered, including his mother, as well as 45,000 of his parishioners.

People paid for Fr. Ubald to stay in Lourdes and find healing. Fr. Ubald agonized over the deaths of his loved ones. While walking up a hill during Stations of the Cross, a priest said, "Jesus accepted His cross", and Fr. Ubald heard a voice say, "Ubald, pick up your cross, the genocide is your cross".

After the genocide, the survivors in Rwanda were traumatized by the atrocities that had occurred - both those who had lost loved ones and those plagued by guilt after what they'd done. Fr. Ubald preached that the only way to heal people was through reconciliation and forgiveness, listening to people, evangelizing, and healing.

Initially, Rwandans did not want to hear his message, but Fr. Ubald continued his mission and would visit the prisons of Rwanda to tell the perpetrators of the murders to ask for pardon for what they had done. He also encouraged victims to offer forgiveness.

One day, while teaching in the prison, Fr. Ubald was approached by a prisoner who asked for his forgiveness, confessing he had ordered the killing of Fr. Ubald's mother.

After telling the man he forgave him, Fr. Ubald decided to go a step further. Since the man's wife had died in the genocide and his children were basically orphans, Fr. Ubald offered financial assistance to the man's children and paid their school fees.

Fr. Ubald also had a gift for miraculous healing, which his bishop encouraged him to share publicly. Fr. Ubald's reputation as a healer spread all over Rwanda and beyond. His healing services eventually began to be held in stadiums and would attract crowds of 10,000 - 60,000 people. There are many documented cases of physical healings, spiritual healings, healings in relationships, and emotional healings.

Insisting his gift of healing was solely attributed to Jesus, Fr. Ubald said, "Jesus heals. Only Jesus. I am only his instrument. You must open yourself to Jesus, and let him do the work he wants to do in you".

Fr. Ubald traveled throughout Rwanda, Congo, Burundi, and other parts of Africa, all over Europe, and the Holy Land. He made his first trip to the United States in 2009, at the request of Imaculee Ilibagiza, who authored "Left to Tell" and "Our Lady of Kibeho", and who also survived the genocide.

Fr. Ubald authored the book "Forgiveness Makes You Free", and a documentary was made about his work, "Forgiveness: the Secret of Peace". In his book and documentary, Fr. Ubald describes 5 Keys to Forgiveness: opening the heart to Jesus and receiving his healing; thanking God with faith for all he has done for you; forgive and receive forgiveness; renouncing evil and deciding to live for Jesus; and receiving with joy the blessing Jesus wants to give you, sharing those blessings with others—especially through your testimony.

Another project Fr. Ubald began was the Center for the Secret of Peace. He envisioned a place where people could come on retreat to help find reconciliation, prayer, and peace. He wanted retired priests to live there, as well as sisters from Missionaries of Christ the King, who could help the older priests and the Center. The Diocese of Kigali purchased a piece of property overlooking Lake Kigali to build the Center.

According to Fr. Ubald, "Healing begins with forgiveness. Forgiveness makes you free. Freedom is joy. Joy is Jesus. This is the secret of peace".

Arrangements are being made to return Father Ubald’s body to Rwanda, where the funeral will most likely take place.