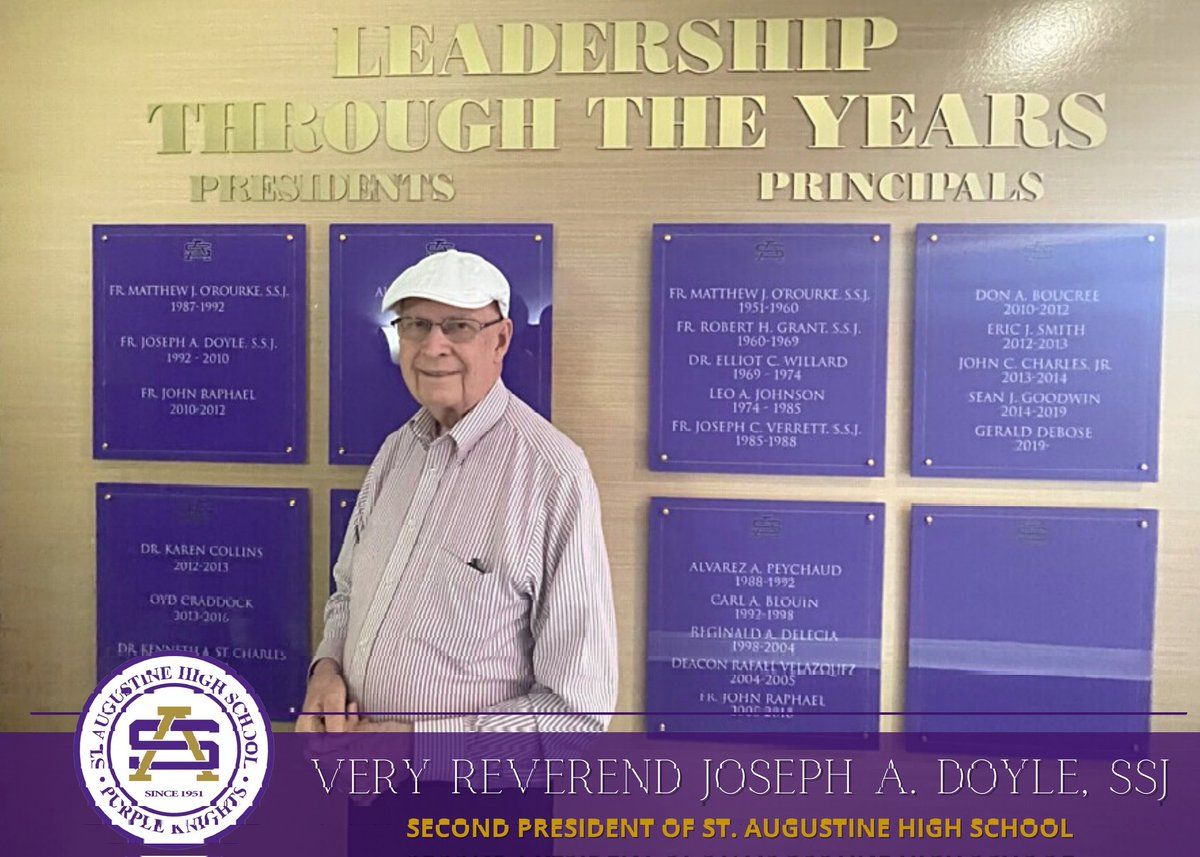 Fr Joseph Doyle, SSJ, a longtime educator, pastor, and the second president of St Augustine High School in New Orleans, passed away in the city on Tuesday, November 2nd at the age of 82, following a battle with pancreatic cancer.

He was buried the following Friday at Corpus-Christi Epiphany Catholic Church with a livestreamed Funeral Mass celebrated by Bishop John Ricard, SSJ, the superior of the Josephites, Doyle’s religious community.

“Father Doyle was a very loyal and hardworking Josephite for many years,” Ricard told the Josephite Harvest, the society’s missions magazine.

“He was a mentor to young men. He excelled at that, and they loved him.”

Born in Baltimore, Md. in 1938, Doyle attended seminary with Ricard and was ordained in 1968, part of one of the last classes of Josephites to study at St Joseph’s Seminary in Washington DC before its transition to residence-only.

He would later obtain a doctorate from the Perkins School of Theology and serve across the Josephite footprint, including in his native Maryland as well as DC, Texas, Alabama, Mississippi, and Louisiana, making his last stop in New Orleans.

He served as president of the society’s historic St Augustine High from 1992 to 2010, succeeding Fr Matthew O’Rourke, SSJ (the school’s first president and founding principal). The school itself was founded in 1951 as an all-boys Black Catholic school, and maintains that distinction to this day.

Doyle led the school through some of its most turbulent years, including the fallout from Hurricane Katrina, which displaced much of the local populace. During that time, he led the school’s addition of the sixth and seventh grades, as well as its temporary merger with other Black Catholic high schools in the city (resulting in the MAX School of New Orleans).

“He had a great impact on our school and its growth,” said interim St Aug president Aulston Taylor, who attended the school during Doyle’s tenure.

“Father Doyle was the voice for the school in the community. So much good came from his efforts.”

Taylor also noted in a personal statement that Doyle secured the two largest alumni gifts in the school’s history (totaling $1.5M) and inaugurated its Pierre Toussaint Scholarship program, in which qualifying students—including Taylor himself—received a two-thirds discount on tuition.

“Without Father Doyle, I would not be where I am today,” Taylor told the Harvest.

Fr Peter Weiss, SSJ, Chief Religious Officer at St Aug, noted in his own statement that Doyle was also active in Right to Life advocacy across the region and at the school, co-founding a pregnancy resource center in New Orleans and remaining committed to “the dignity of all human beings”.

“He worked tirelessly every student knew and understood the very essence of the Church’s teaching on the sacred nature of life, from the beginning in the womb, until its natural end at death.”

After serving for 25 years at St Aug, Doyle became novice master for the Josephites, later helping to spearhead the novitiate’s move to New Roads, La., where it remained until earlier this year.

Doyle later returned to New Orleans and lived in residence at the high school. He authored a book on the childhood of Jesus in 2012 and celebrated 50 years as a Josephite in 2018.

“The best part about serving the African-American community is the spirituality,” he explained to the Harvest that summer.

“Their deep faith, their approach to suffering—not just physical, or through poverty, but emotional suffering through prejudice and discrimination.”

His own earthly suffering now ended, Doyle’s legacy can be expected to be carried on in the lives of his former students, as well as among his fellow Josephites.

“I am very happy he is at peace,” Ricard said.

“Father Doyle is prepared to meet with God, whom he served so well.”

In lieu of flowers, Doyle asked that donations be made to the high school in his memory. If you would like to support the endowed Fr. Doyle St. Augustine High School Scholarship, please contact Catholic Community Foundation Executive Director Cory J. Howat at chowat@ccfnola.org or (504) 527-5778. Reflection: Why I wrote a new book about Catholic anti-racism