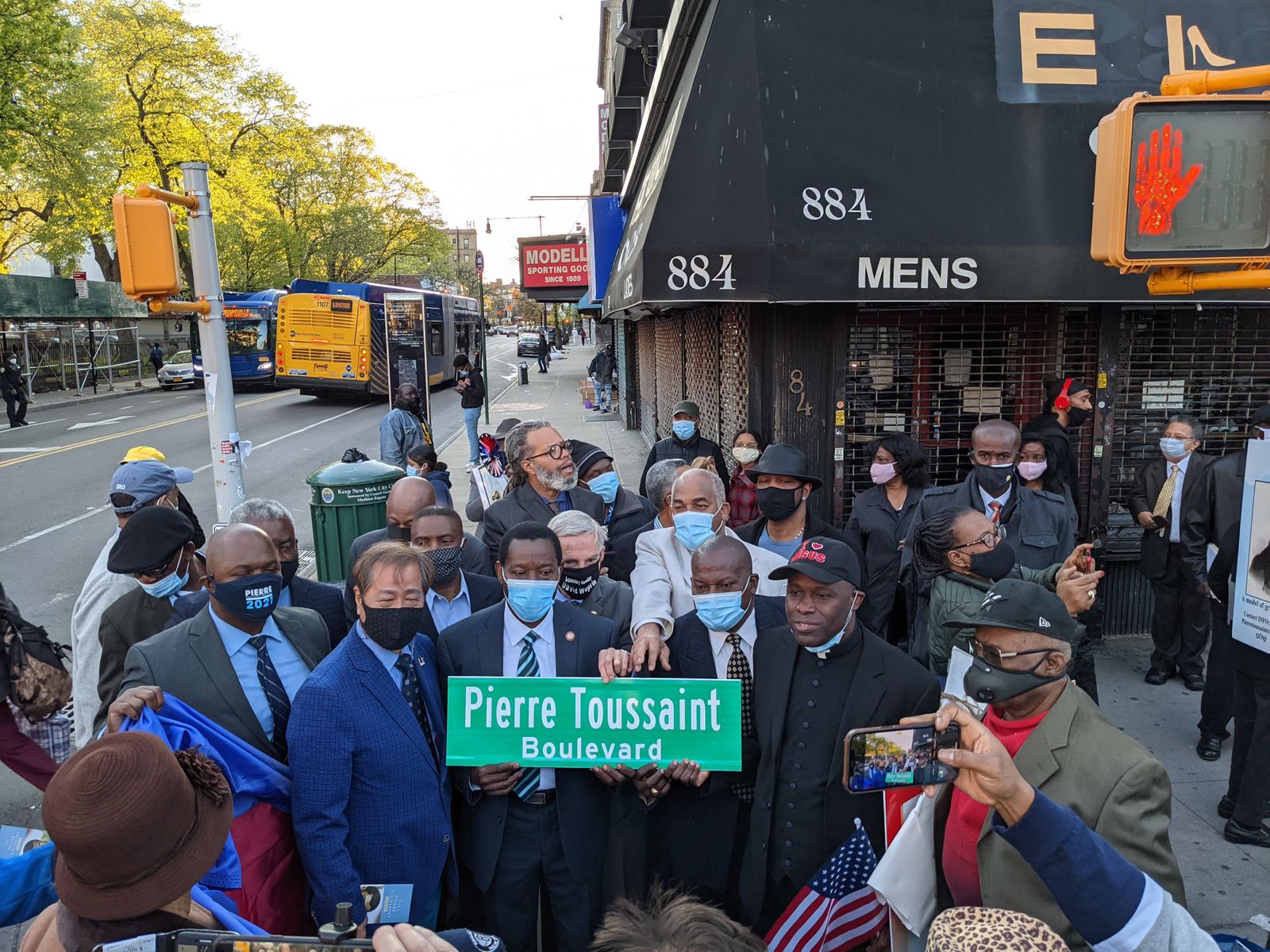 A little slice of the world (and Heaven) descended upon Little Haiti in the heart of Brooklyn Sunday evening to celebrate a Black Catholic legend known around the country and beyond for his works of charity.

His recompense? For now, on Earth, a street named in his honor in a neighborhood filled with his people.

Venerable Pierre Toussaint, the Haitian-American saint—or saint-to-be, depending on whom you ask—was lauded in a ceremony that began at Holy Cross Catholic Church in a neighborhood known also as “Little Caribbean” since a few years ago.

It took some doing for the area to officially gets its name, and the journey to getting Pierre Toussaint Boulevard was much the same. Dr. Mathieu Eugene, New York City’s first Haitian-born city councilperson, first introduced legislation for the name change in 2019, after roughly 12 years in office.

This week, his work paid off with flair, as he hosted the event with several of his friends, associates, fellow politicians, and a sizeable crowd of Haitian-American onlookers. Various news outlets covered the event, including the local Catholic TV station.

The co-naming ceremony, which came in the form of a prayer service, procession, and official unveiling, was attended by numerous Catholic clergy as well, having been organized in part by the Brooklyn Diocese’s Haitian outreach and the Pierre Toussaint sainthood guild.

The retired Bishop Guy Sansaricq, the United States’ first and only Haitian-born Black bishop, was among those in the places of honor. (This year marks his 50th year serving stateside, and his 34th as head of the national Haitian apostolate.)

Sansaricq delivered the Gospel reading and a short reflection as part of the prayer service, which featured various other speakers highlighting the life and ministry of Toussaint as well as the vibrancy and legacy of Haitian culture and Haitian Catholicism.

Also present at the event were Bishop Neil Tiedemann, head of Caribbean and African-American ministry for the diocese, and Fr Hilaire Belizaire, head of its Haitian outreach. They were joined by Vincent Coq, a representative from the sainthood guild who spoke of Toussaint’s example of holiness, a faithful Catholic pursuing not only a philanthropic vision but a beatific one.

Michelle Guerrier, another leader from the guild (who also manages the Facebook page Black Catholic Voices), did double-duty as a lector and also live-streamer of the event on Facebook.

As could be expected, the event was a thoroughly bi- (even tri-)lingual affair, with various speakers alternating between English, Haitian Creole, and French—including a surprise guest, Senate Majority Leader Chuck Schumer, who was given the stage by Eugene and related with the audience with French linguistics and American politics.

Indeed, voices sounded well before the day of event that there were political motivations to the whole affair, what with attaching a Haitian American legend to a street in a Haitian neighborhood that has not always been on good terms with its Haitian politicians. But perhaps nothing in life—or the Church—is without politics, and perhaps it’s only right that a civic honor involve the trappings of civic engagement (and all its theatre).

The crowd certainly knew their role, chanting their calls-and-response on cue, singing the songs of their people—and mine—and, as the party moved a few blocks west to the still-veiled signpost, taking great pride in filling a major thoroughfare on a Sunday afternoon with strides fit for royal retinue.

Cameras flashed, a gargantuan Haitian flag draped the space behind the hosts and friends, and bystanders took interest of their own in a group of Black Catholics celebrating a moment seen only once before in this land, when another Venerable (and francophone) Black Catholic—Mother Henriette Delille—received a street renaming in New Orleans 10 years ago this July.

Toussaint’s holy procession ended at Flatbush and Church, where the speeches continued, drawing out a number of local professionals and officials who echoed together the importance of Haitian culture, Haitian faith, and the day’s Haitian hero.

One of Mayor de Blasio's senior advisors, Magalie D. Austin—herself a Haitian American—spoke at this juncture, the last of several stand-ins for prominent officials who apparently could not be present (including New York's Cardinal Dolan and Brooklyn's Bishop DiMarzio).

The final introductee was one Corine Jean, a Haitian-American youth representing the generation who will come of age, raise their own children, and perhaps grow old speaking of a Black Catholic saint from Saint-Marc in their casual cartography.

“A lot of people—at least kids—are embarrassed to be Haitian,” she noted over the loudspeaker, “but I’m very proud of my Haitian culture.”

And so she was, belting out the Haitian national anthem as the veil slid away in the twinkling of an eye—perhaps a few, given some less-than-technical difficulties—and Church Street officially took on the namesake of a man who loved exactly that: the spiritual home of his youth, of his native Haiti, and of his heart.

As the people sang in the aftermath, all that could really be said was “Amen.” 'They are killing my people': a poem Jon Batiste wins again, this time at the Oscars