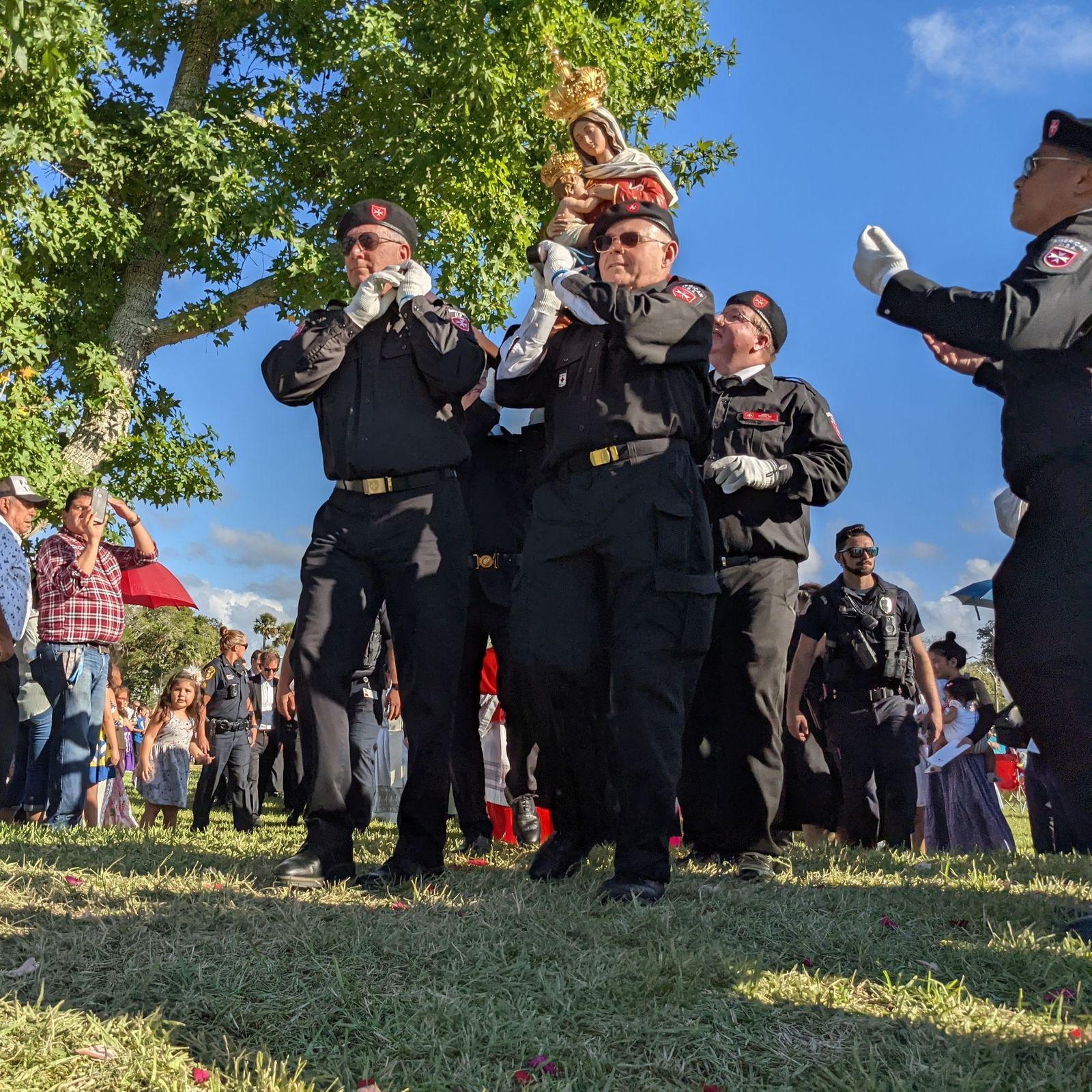 A story of firsts is now complete in the ‘first city’, St Augustine, Fla., where the nation’s oldest Marian statue was enthroned anew on Sunday with a papal legate in tow.

Our Lady of La Leche, venerated by the Spanish settlers who arrived in the area in 1565, received a long-awaited canonical coronation at the downtown Cathedral Basilica of St Augustine—home to the oldest Christian community in the nation.

The Mass was presided over by Cardinal Carlos Sierra, Archbishop of Madrid, at the invitation of Pope Francis.

“This morning as I was beginning he day, a thought occurred to me of those who first came from Spain to this land,” Sierra said during his homily, translated from Spanish by St Augustine’s Bishop Felipe Estévez.

“They came with good sentiments and came with good purposes. And so I have come, and I am so honored to be here with you today for the crowning of Our Lady of Leche, representing the Holy Father himself.”

The parish’s original home, the epochal Mission Nombre de Dios roughly a mile away—also the site of the National Shrine of Our Lady of La Leche—hosted a throng of hundreds of onlookers who viewed the ceremony via livestream on an oversized digital display.

Roughly 7,000 viewers tuned in to the historic ceremony from afar, witnessing on Facebook and YouTube the nation’s fourth-ever canonical coronation.

Sierra's homily also featured an impassioned evangelistic turn, in which the coronation was spoken of not just as an event celebrating the ancient past, but as a missionary call urging local Catholics to a revolutionary future—echoing Pope Francis' remarks the same day at the opening Mass for the Synod of Synodality.

Just yards away from the stream-watching crowd at the mission stood the gargantuan “Great Cross”, marking the spot where the settlers landed and celebrated the first-ever Mass in what would become Spanish Florida, and eventually the United States.

With the settlers came a number of free and enslaved Africans, marking one of the earliest inflection points for Black Catholicism in the US—including St Augustine’s own St Benedict the Moore Catholic Church in historic Lincolnville.

Sunday's Mass was similarly multicultural, featuring a host of priests and dignitaries in the 224-year-old cathedral including Bishop Demetrios of Mokissos from the Greek Orthodox Church, whose first community in America was also in the St Augustine area.

Demetrios currently oversees the National Shrine of St Photios down the street from the basilica.

After Communion came the moment of truth, in which two new crowns were affixed by Sierra to the Blessed Virgin Mary and the child Jesus nursing at her breast—an image long honored for its miraculous influence on fertility and motherhood.

Following the coronation, the 151-year-old diocese was consecrated to Jesus through Mary before a procession weaved its way to the grounds of the mission and shrine, where an ecstatic crowd welcomed the entourage with the expected pomp—including a display of flags and flowers from a group of children led by local nuns.

An extended procession continued through (and with) the assembled faithful before heading across the field to the shrine itself, where a small group of clergy and supporters gathered for the statue’s re-enthronement in its rightful and historic place.

“She is going where she belongs,” Estévez noted.

The festivities continue today, the feast of Our Lady of La Leche, with a series of Masses at the shrine’s nearby church and a presentation from the Order of Malta.

Going forward, pilgrims to the shrine will also be treated to a brand-new rosary garden as well as the reopened Great Cross Promenade, which remained closed during the weekend's events.

And, of course, for the first time since early this year, the National Shrine of Our Lady of Leche will once again be accessible for all who wish to seek a favor from a certain Queen and her kingly Son.