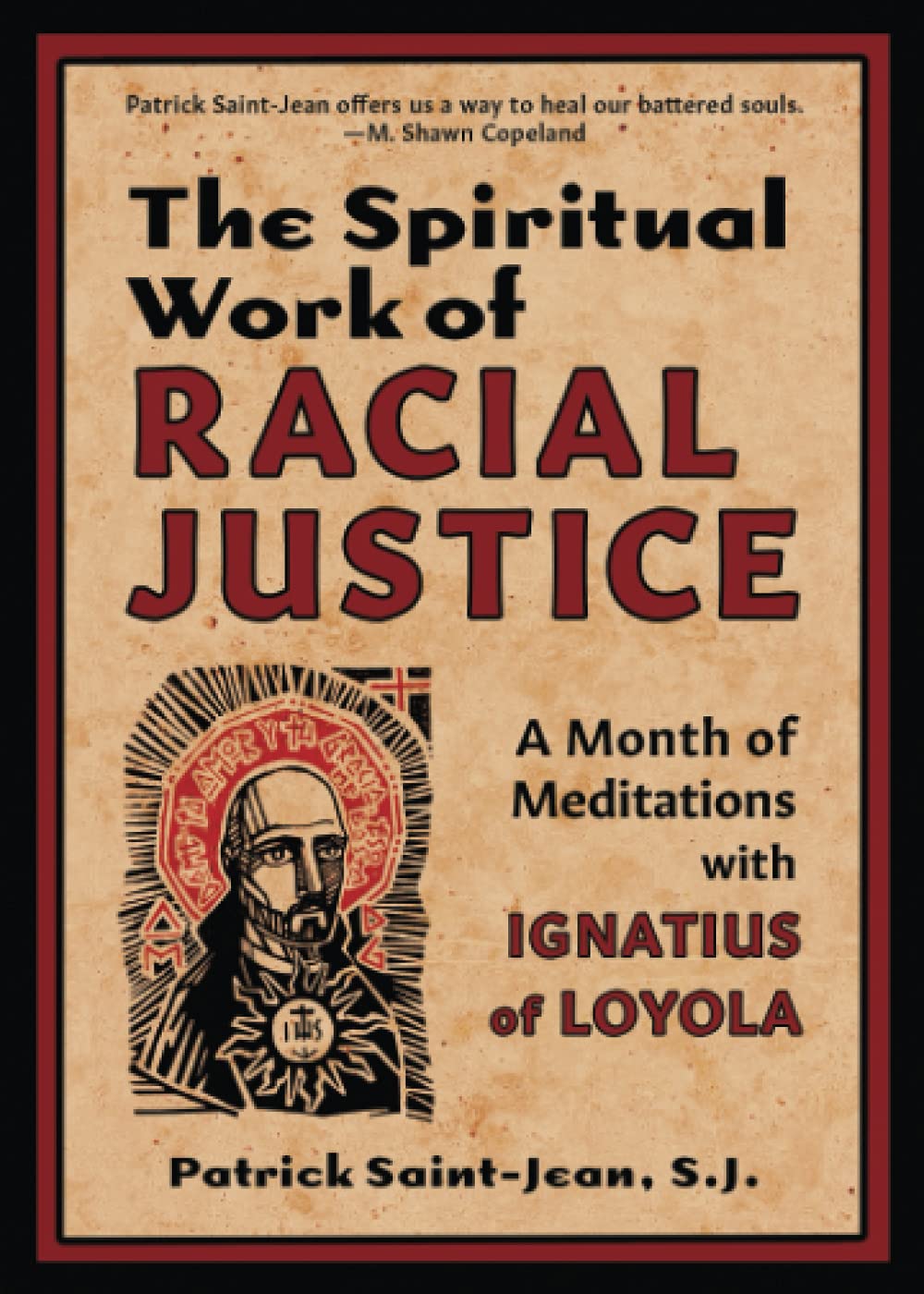 Excerpt: The Ignatian “Magis” as an Antidote for Racism

Editor's note: This is excerpted from The Spiritual Work of Racial Justice: A Month of Meditations with Ignatius of Loyola (Anamchara Books, 2021). Edited and used with permission.

Ignatius’ mystical experience on the riverbank in Cardoner showed him a reality that was constantly flowing with God’s creative generosity. It gave him an optimistic confidence in God’s ability to supply whatever was needed, which in turn encouraged him to set no limits on what God might work through him. He worked to make himself constantly and actively available to the Divine Spirit, always alert and ready. In a letter he sent to some students, he said, “We should never postpone a good work, no matter how small it may be, with the thought of later doing something greater.”

As we consider that in the struggle against racism, we can be both encouraged and challenged by Ignatius’s life and teaching. From him, we learn that the work of antiracism must be balanced with constant prayer and discernment, so that we do not act on impulse or out of ego. Our dependency on prayer is Christ’s way of meeting us in the midst of life’s complications and confusion.

In the Spiritual Exercises, Ignatius challenges us to also live our lives in cooperation with God’s ever-flowing and generous action. As always, he perceived the intersection between the spiritual world and the physical in very real and practical terms. We can see this reality lived out in his life.

At one point in the early years of the Society of Jesus, he sent Fr Andrea Galvanello to a parish in the village of Morbegno for a temporary placement. After six months, the village had become so fond of Father Galvanello that they wrote to Ignatius, asking that he be allowed to stay as their permanent pastor. Ignatius refused, which made a lot of people very upset with him. He resisted their pressure, however, saying that Father Galvenello was needed in other places. To confine him to one village would mean “the greater good would be lost for the sake of the lesser.” Ignatius knew that God’s openhanded bounty cannot be limited by human territory or division. It doesn’t belong to just one group of people but to all people. Having the wisdom to live that out in the real world can be tricky, though. Once again, it takes prayerful discernment.

Ignatius wasn’t saying, however, that the good of the many outweighs the needs of the few (a philosophy that has historically led to elitism and marginalization). Instead, his perspective means we don’t settle for simplistic answers. We take the time to seek out the root causes behind oppressive systems, and we tackle the roots rather than the symptoms. Although wounds may need bandaging now, what we are really working for is a world where no wounds are inflicted. This isn’t easy. We will need to work with others who know more than we do. And yet again, we will need to undergird all our actions with prayer.

The Ignatian concept of magis (“more, greater”) does not mean to simply do more and more things until we become exhausted workaholics. Author Marcus Mescher warns that “magis isn’t about the best, the most, or the greatest. It’s not an exhortation to give more generously, raise our standards for excellence, or add more items to our to-do list.” In the Spiritual Exercises, Ignatius warns us against the overcommitment that can lead to burnout, and we need to keep this in mind as we commit to the work of antiracism. Engagement with antiracism cannot be treated as a social-justice–themed extravaganza, a frantic display of ever-increasing commitments. To prevent this from happening, again and again we need to undergird our anti-oppression work with prayer. Always, Ignatius reminds us that we need both contemplative and active engagement with the work of God. That is the only way we will have the energy to work unceasingly against racism.

Even then, as human beings, we must always be aware of the temptation to allow our egos to become inflated, even when we are working hard for others. We want to do great things for God and for the world—but doing so can be an opportunity for pride and ambition. In the work of antiracism, this can lead, ironically, to Whites perceiving themselves as superior to the people they are trying to help. It can contribute to the “White savior” tendency, where White people seek to “help” and “empower” people of color, rather than affirming and respecting the richness and potential within these communities. With this attitude, antiracist work can be all about White people, rather than being about people of color, and White people may arrogantly seek to impose what works for them into settings they don’t truly understand. ‘To seek to bring all people to salvation by one road is very dangerous,” Ignatius wrote. “The one who does so fails to understand how many and various are the gifts of the Holy Spirit.”

“Magis is less about doing for others,” Mescher explained, “. . . than it is about being with others.” He goes on to say:

This is how we come to better understand who people are, what they most deeply desire, and how we can partner with them to work toward that end. Not to be the voice of the voiceless (which may be well-intended but can nonetheless be paternalistic), but to be advocates, allies, and accomplices in the work for justice and peace.

Jesuit author William A. McCormick wrote that Ignatius directs us to “an open-handed disposition to give and share of what one has, with the assumption that one has a great deal to share,” thanks to God’s abundant generosity. “We may be quite sure that God is always ready to be liberal,” wrote Ignatius, “provided he find in us a deep and true humility. . . . The closer you bind yourself to God and the more wholeheartedly you give yourself up to his supreme majesty, the more liberal he will be to you.” Magis requires that we be “magnanimous,” said McCormick, which “is a readiness to ‘think big,’ to embrace projects of grand scope.” Magnanimity, he went on to say,

is not something one does ultimately out of sheer, exuberant voluntarism, but in cooperation with God. . . . [It] will not always mean doing things that make us feel good or important, nor will it always immediately satisfy our desires. Rather, one should be magnanimous in a way that can be sustained in the long-term through difficult ministries and because one discerns a call from God to be so—not just because one so desires. Magnanimity is a fundamentally hopeful attitude, trusting in God’s control of history. The magnanimous person knows that his work will bear fruit despite human foibles, for God ultimately directs the work.

“God would readily give us much greater graces,” wrote Ignatius, “if our perverse wills did not stand in the way of his bounty.”

For Ignatius, our work is always the work of Jesus: achieving salvation—the state of spiritual and physical well-being—at both the individual and communal levels. “The purpose of this Society,” he wrote, “is not directed merely at the salvation and perfection of the souls of its members by divine grace, but rather by the same grace to work assiduously for the salvation and perfection of the souls of our neighbors.” Ignatius sometimes got angry if he heard that someone was seeking to join the Society of Jesus in order to find help and healing for himself. Instead, Ignatius wanted people who understood that their individual well-being depended on the well-being of others. As Martin Luther King Jr. wrote, “Injustice anywhere is a threat to justice everywhere. We are caught in an inescapable network of mutuality, tied in a single garment of destiny. Whatever affects one directly, affects all indirectly.”

Within the living, breathing, interwoven community that is Christ’s Body on earth, the “greater good” is always expressed through our interdependent solidarity with one another. A live-and-let-live attitude has no room in this reality, for our existence is tied up with one another. “The climate,” wrote Pope Francis, “is a common good, belonging to all and meant for all.” This is the reality of the Realm of God. “Love,” wrote Ignatius, “consists in the mutual sharing of goods.”

As we learn from Ignatius of Loyola, we will soon recognize that the word progress is fundamental to his spirituality. In our own individual lives, we have been learning and growing ever since we were born—and we don’t graduate from the school of life until we die. The same holds true in anti-oppression movements. Antiracism work is not a sprint but a marathon. We aren’t done with this work until we are dead.

Ibram X. Kendi has a bestselling book titled How to Be an Antiracist. Although I have used his book in numerous talks and writings, the title is a bit troubling to me. In Ignatian spirituality, “salvation” means constant growth; it is a way to see God’s movement in human lives. In antiracism work, this constant growth can be understood best by conjugating the verb in the active form: as antiracism working. Perhaps a better title for Kendi’s book would be Becoming an Antiracist, because this work will take a lifetime of intentional engagement. It is not enough to sit in a book club for two weeks discussing Kendi’s book and then say, “I am not racist.” Instead, antiracism work requires our constant and continued work, just like our faith requires constant and continual work with Christ to bring about the Realm of Heaven.

In his spiritual exercises, Ignatius asks you and me to make room for grace, to allow ourselves to enter into a new culture of growth, where we constantly continue to improve—as the community around us also improves. “Praise and thanksgiving to God our Creator,” wrote Ignatius, “from whose infinite liberality and bounty overflows the fullness and fruit of all good things.”

Antiracism work is a lifelong commitment, a new declaration of personhood, a new identity, and a sacramental way to continuity. Meeting Christ in others in the daily now will help us progress together toward the Divine Realm. “The magis is the fire,” said Pope Francis, “the fervor of action that rouses us from slumber,” so that all of us can move forward to become better, greater, stronger.

Are you ready to begin?

Patrick Saint-Jean, S.J., PsyD teaches in the psychology department at Creighton University in Omaha, Nebraska, where he is also a psychotherapist. He enjoys jazz, traveling, and learning new languages; and he plays the guitar, harmonica, and drums. He also likes a cup of hot water in the morning.